The number of lawyers who describe their practice as a “virtual” law practice declined this year to 5 percent, from 7 percent the year before, according to the 2013 ABA Legal Technology Survey Report. The number of virtual law practices is higher among solos, where 7 percent describe themselves as virtual, and among firms of 2-9 attorneys, where 6 percent say they are virtual.

[For my other reports from the survey, see The Most Popular Apps for Lawyers, According to ABA Tech Survey, Lawyers’ Use of Cloud Shows Big Jump in ABA Tech Survey, and Lawyers’ Social Media Use Grows Modestly, ABA Annual Tech Survey Shows.]

What makes a practice virtual? The survey asked those who describe themselves as virtual what they considered to be the defining characteristics of their virtual law practice. Not surprisingly, the most common answer, given by 58 percent of these virtual lawyers, was “lack of traditional physical office.” Other common answers were  “minimal in-person contact with clients” (52 percent),  “use of web-based tools for client interaction” (46 percent), “use of a secure client portal/extranet” (18 percent), “offering unbundled legal services” (18 percent) and “other” (3 percent). 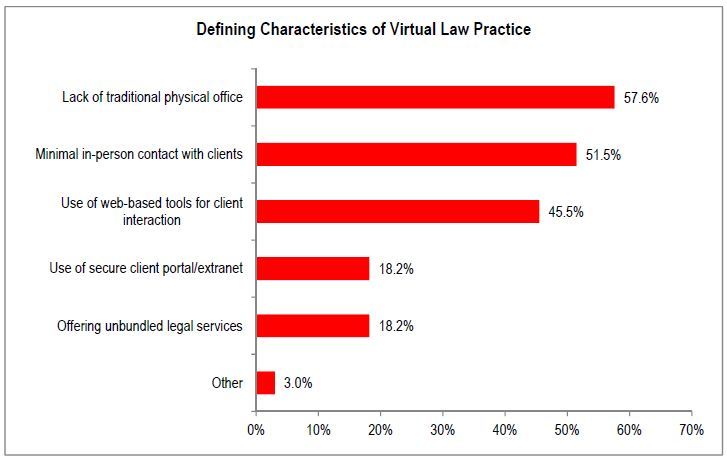 Once again, smaller firms are the most likely to offer unbundled services, with 45 percent of solos and 39 percent of lawyers in 2-9 member firms saying they provide them. In firms of 100 or more attorneys, the percentage drops to 27. The practice areas where unbundled services are most common are family law (54 percent) and estates and trusts (45 percent).

The survey also asked lawyers whether they offer clients access to a secure client portal. Twenty-five percent say they do, the same number as last year. Here, large-firm lawyers are the most likely to offer a portal, with 60 percent of lawyers in firms of 100 or more lawyers saying they do this. Among solos, only 11 percent offer client portals.

Among lawyers who have client portals, the most common use is document sharing (30 percent), followed by messaging and communication (23 percent), invoicing and payments (20 percent), case updates (17 percent), scheduling and calendars (14 percent), and real-time consultation (8 percent). 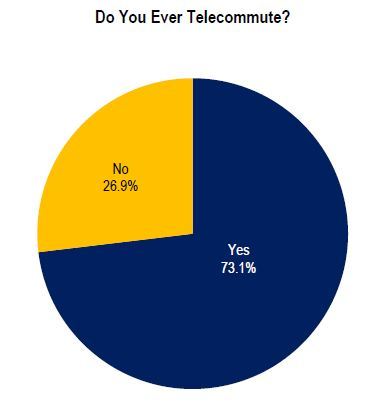 In addition to asking lawyers whether they consider their practices virtual, the survey also asked whether they use virtual office services, which it defined as services that provide a fixed mailing address or phone number together with on-demand use of office space and receptionists. Overall, 5 percent of lawyers say they use such services, with solos being the most likely to use them (10 percent).

The findings discussed above came from the volumes on web and communication technology and mobile lawyers.