Lawyers’ social media use continues to grow, but only modestly, according to just-released findings of the 2013 American Bar Association Legal Technology Survey Report. More lawyers and law firms blog, tweet and participate in social media sites this year than last, but the growth is far from dramatic — generally just a few percentage points. 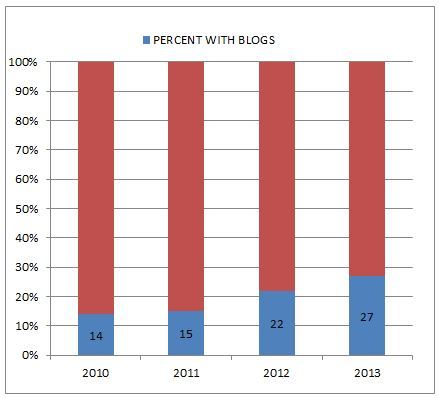 Percentage of law firms with blogs.

When lawyers were asked if they personally maintain a blog for professional purposes (as opposed to whether their firm does), only 9 percent answered yes. Overall, solos are the most likely to have a blog, with 12 percent saying they have one, up from 7 percent the year before. With regard to the age of legal bloggers, lawyers between 40-49 are the most likely to have professional blogs.

Of the firms that do maintain a presence in a social network, the most common networks are LinkedIn and Facebook. Of these firms, 92 percent have a presence on LinkedIn, up from 88 percent the year before. On Facebook, 58 percent say they have a presence, up from 55 percent in 2012.

Meanwhile, law firm use of legal-vertical networks remains negligible. Of the 59 percent of firms that are on social networks at all, only 1 percent are on Legal OnRamp, down from 2 percent the year before. On Avvo and Martindale-Hubbell Connected, the number remained steady from last year at 2 percent. One percent of these firms reported a presence on LawLink. 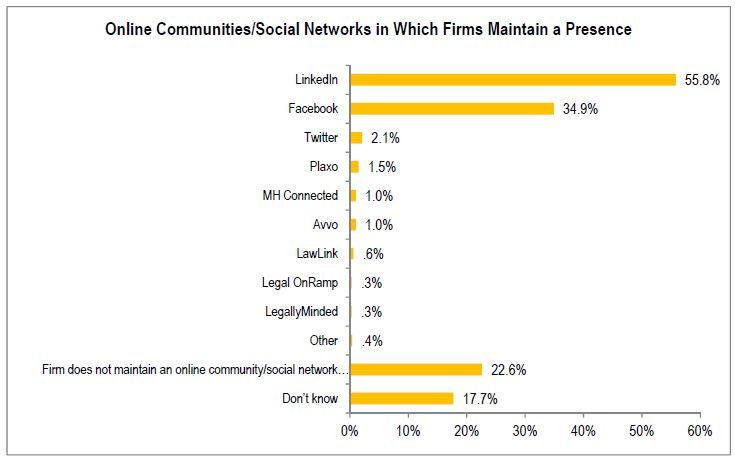 Use of Twitter by law firms also grew slightly over last year. Nineteen percent of respondents said that their firms maintain a presence on Twitter or similar microblog services. That is up from 13 percent last year, 7 percent in 2011 and 5 percent in 2010.

Among lawyers individually, 14 percent say they use Twitter. That is a slight increase from 11 percent in 2012, but more than double the 6 percent who said they used it in 2011. Twitter users are more likely to be in smaller firms, with 18 percent of solos and 19 percent of lawyers in 2-9 member firms saying they use it. Of those in firms of 500 or more, only 9 percent use Twitter. 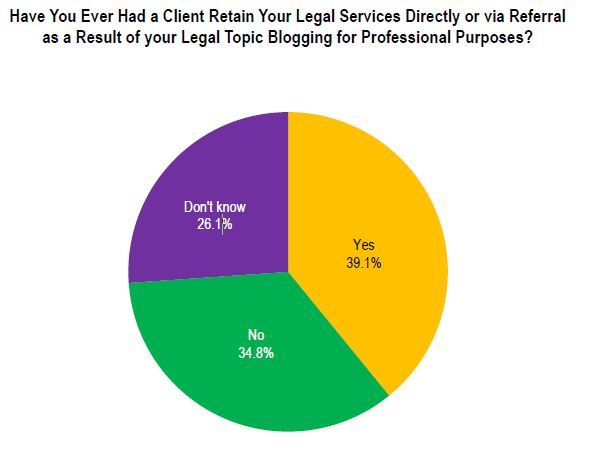 A perennial question for lawyers is whether participation in social media generates new business. The survey asked lawyers whether a client had ever retained them as a result of social media:

The findings discussed above came from the volume on web and communication technology.