The surreptitiously leaked draft of Justice Samuel Alito’s majority opinion overturning Roe v. Wade has been subjected to a firestorm of scrutiny and commentary. For good reason, the focus of the firestorm has been on the opinion’s ultimate ruling and its social and political implications.

But, legal tech nerd that I am, I wondered how the draft would fare if I subjected it to the scrutiny of the legal editing software BriefCatch, which recently rolled out a new-and-improved version 3 of its product.

Designed to help lawyers improve the drafts of their briefs and legal documents, BriefCatch is a Microsoft Word add-in that offers some 11,000 style and editing suggestions, together with explanations and illustrations drawn from the exemplary writing of actual lawyers and judges.

It even counts several Supreme Court justices among its customers, according to founder Ross Guberman.

Read about BriefCatch on the LawNext Legal Technology Directory.

I tested BriefCatch once before, in 2018, when I put it and two other legal editing programs to the test of editing four opinions authored by Supreme Court Justice Neil M. Gorsuch, whom Slate once pronounced a terrible writer.

A feature unique to BriefCatch is its scoring. For each document it reviews, BriefCatch assigns scores based on its analysis of five factors:

For my test, I started by installing the seven-day free trial version of BriefCatch into Word. I then went to Politico, the news site that obtained the leaked opinion, and downloaded the 98-page PDF of the draft in Dobbs v. Jackson Women’s Health Organization.

In order to review the draft in Word, I used Adobe Acrobat DC to convert the PDF to Word. Because the Politico version appears to have been a scan, I had to spend a little time cleaning up the conversion. I also deleted all the footnotes and the draft’s two appendices, which list state laws, leaving just the primary text and citations.

One thing about software is that it is politically neutral. No matter where you stand on abortion, it is difficult for any human to read this draft opinion without feeling emotion. By contrast, BriefCatch simply provides a cold, passionless analysis of its composition and style.

Please note that, by performing this exercise, by no means do I intend to minimize the momentousness of this opinion, should it be adopted by the court, or the enormous significance of its potential impact on our nation. But it could be argued that it is precisely in those toughest cases that lawyers most need the help of a good editing program. 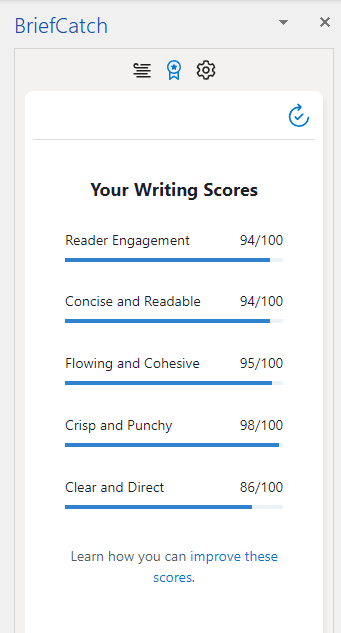 How the Draft Scored

As it turns out, BriefCatch actually scored the draft’s writing high. The image to the right shows that all but one of the scores was above 90, and that the score for “crisp and punchy” was nearly perfect.

The BriefCatch website says that scores above 85 are rare, and that scores average around 70, “but that many solid documents score well below that.”

The site goes on to say: “Take the scores with a grain of salt. Consider context, subject matter, and needs. And remember that quantitative measures can do only so much.”

While the score is a unique feature of BriefCatch, the meat of the product is in its editing suggestions. In its analysis of Alito’s draft, it produced 133 suggestions.

In the second paragraph, punchiness was again an issue for BriefCatch, as it suggested changing “each State was permitted to address” to either “could address” or “had a right to address.” As you can see from the screen cap, BriefCatch offered an example from Justice Scalia. 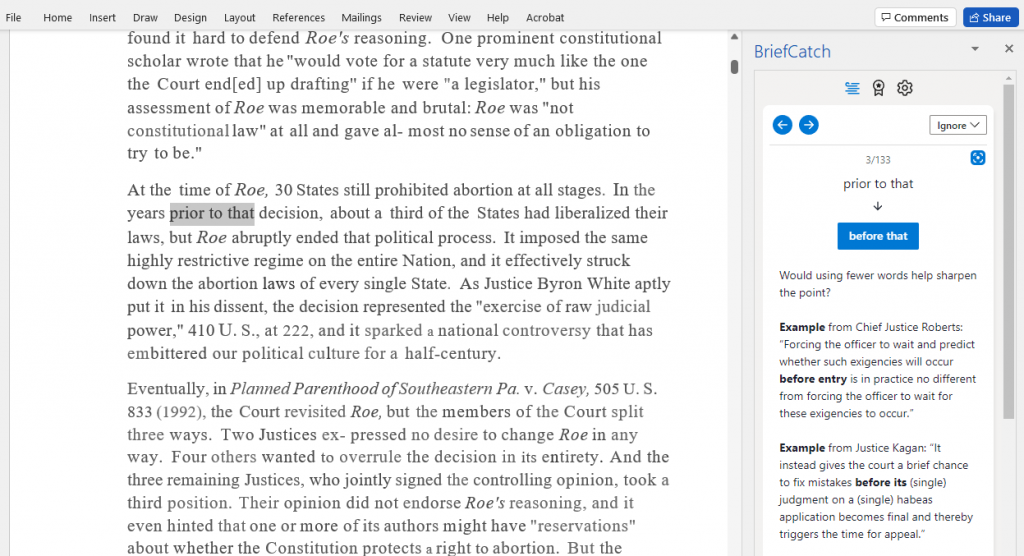 Just a couple more paragraphs into the decision, BriefCatch suggested changing the phrase “prior to that decision” to “before that decision” in order to sharpen the point. This time, it offered examples from Chief Justice Roberts, Justice Kagan, Judge Easterbrook, and Paul Clement. 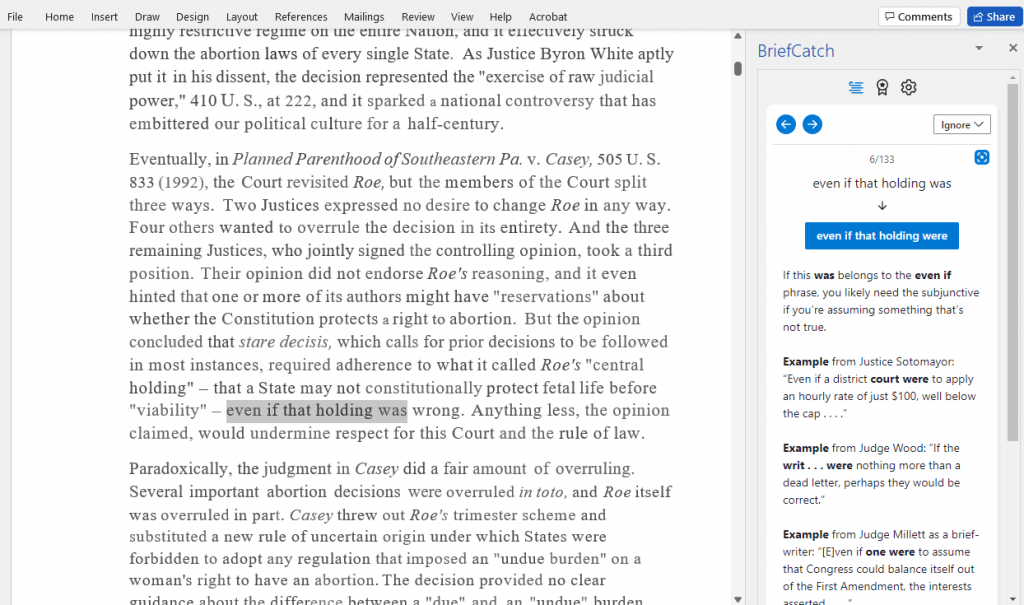 Skipping to the sixth suggestion, BriefCatch recommended that the author to give some thought to whether “was” should be replaced with the subjunctive “were.” I believe Alito’s use of “was” is correct here, in that he is stating that Roe’s holding was wrong as a conclusion, not as a hypothetical. 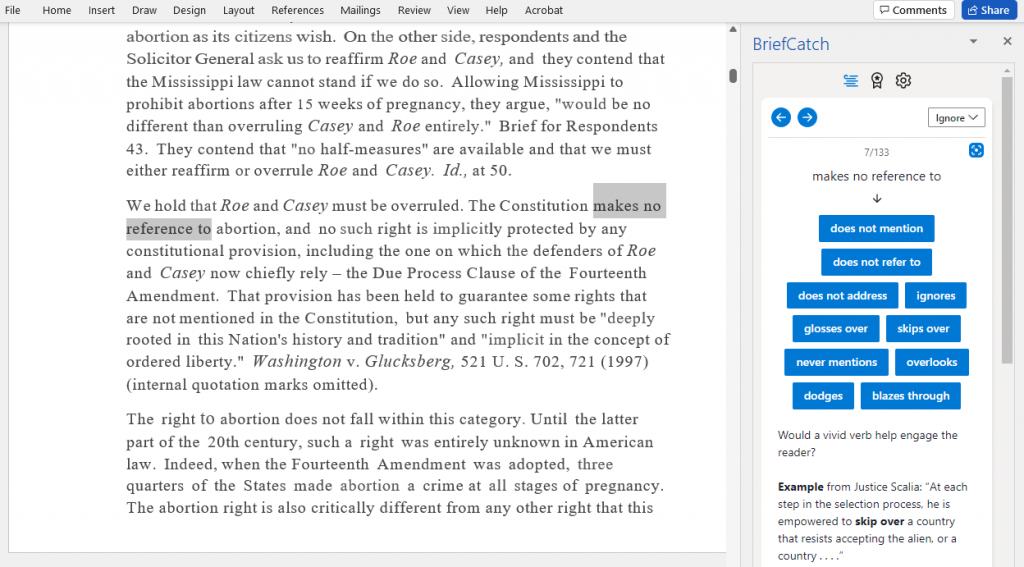 Interestingly, BriefCatch was all over Alito’s statement, “The Constitution makes no reference to abortion,” suggesting — ironically, I would say — that any of several alternatives to “makes no reference to” might better engage the reader. My guess is that few readers had trouble engaging with that phrase, whether for better or worse. 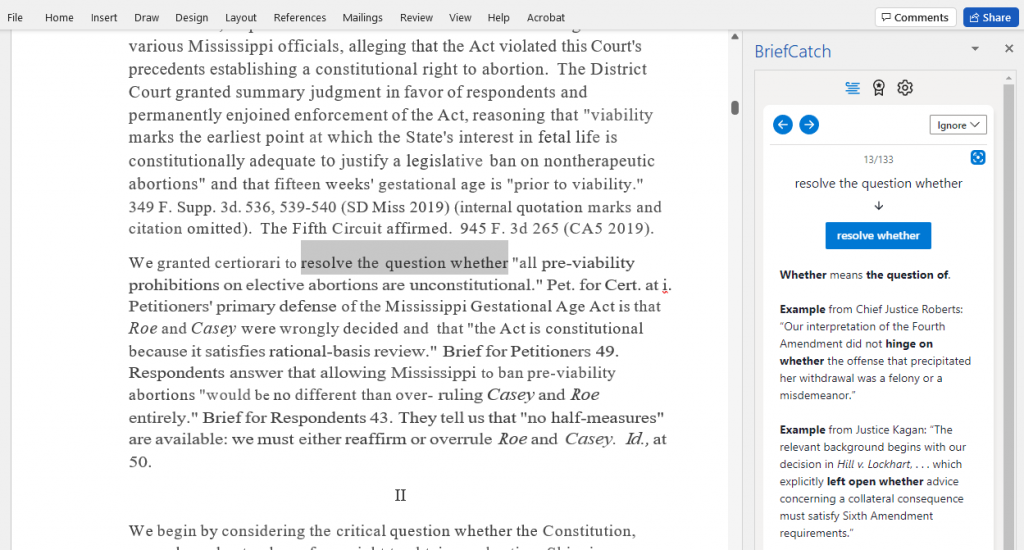 Not much farther into the draft, BriefCatch did not like the phrase, “We granted certiorari to resolve the question whether,” pointing out that “whether means the question of.” It suggested avoiding this redundancy by changing the phrase to “resolve whether.” 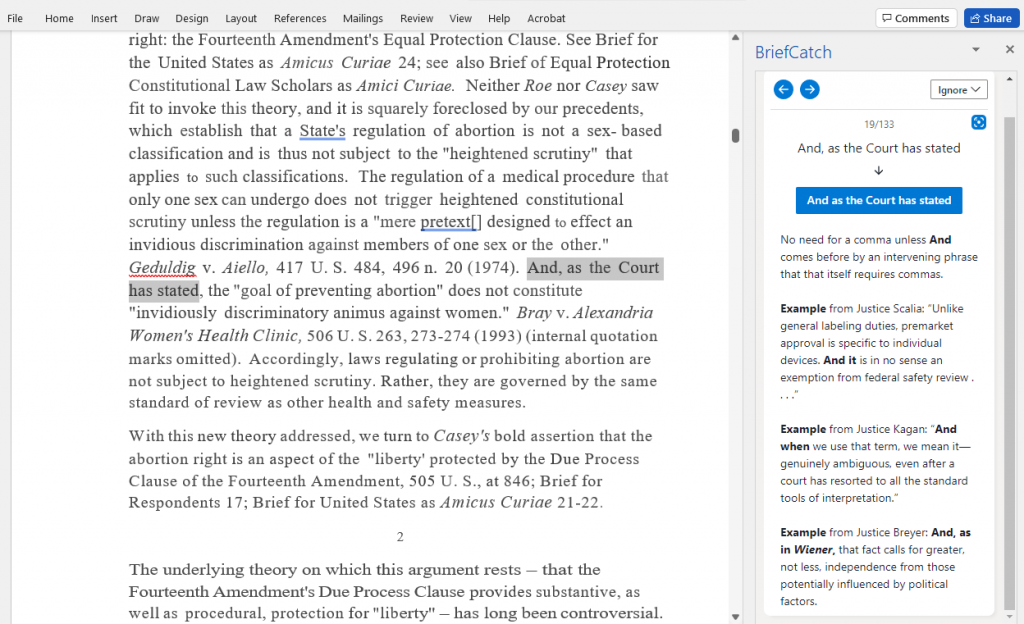 In its 19th suggestion, BriefCatch gets it wrong, suggesting that Alito should not have used a comma after the word “and,” even though its tip indicates a comma should be used if “and” comes before an intervening phrase, which it does. 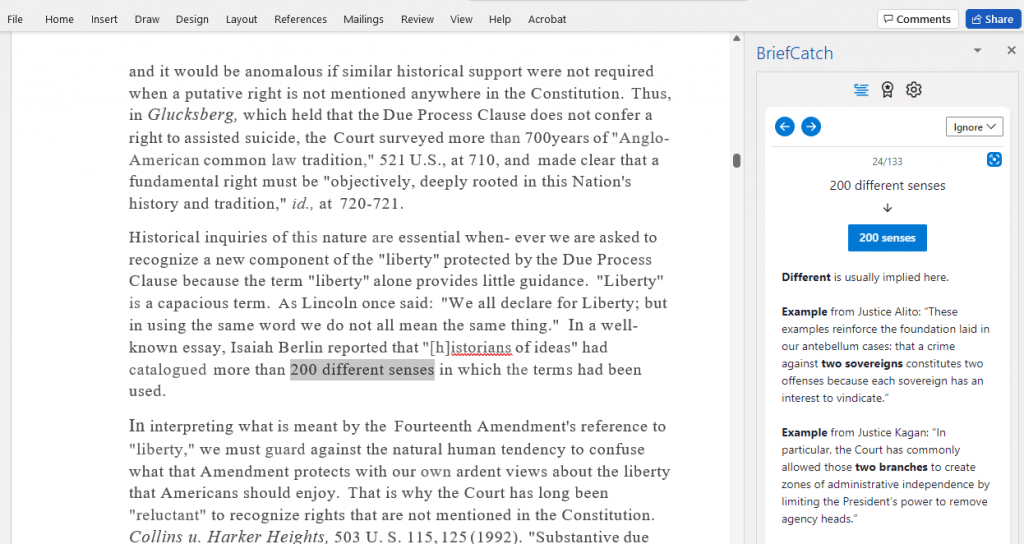 But in this next example, BriefCatch gets it right, pointing out that the phrase, “had catalogued more than 200 different senses,” could be shortened to “200 senses,” since “different” is implied. 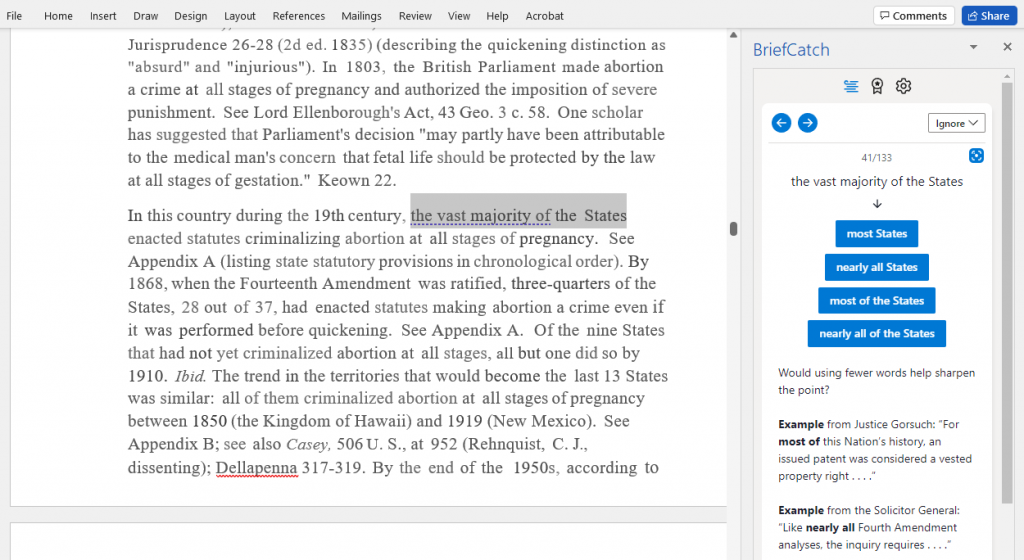 In this paragraph, BriefCatch suggests alternatives to “the vast majority of the States” that it says could help sharpen the point. If I was editing this, I first would not have capitalized states, since it is not used here as a proper noun. But, as I noted, BriefCatch is not a proofreading tool. I might also have suggested that Alito could have strengthened the phrase by replacing “the vast majority of” with the actual number, 28 out of 37, which he provides in the next paragraph.

Here is one where BriefCatch suggested replacing the phrase, “has come to light,” with a more “vivid verb” such as “has surfaced” or “has emerged.” But I questioned the use of the passive voice in this sentence, which BriefCatch did not comment on. “These articles have been discredited” is weak compared to using the active voice and identifying who discredited them — perhaps, “Legal scholars have discredited these arguments.” 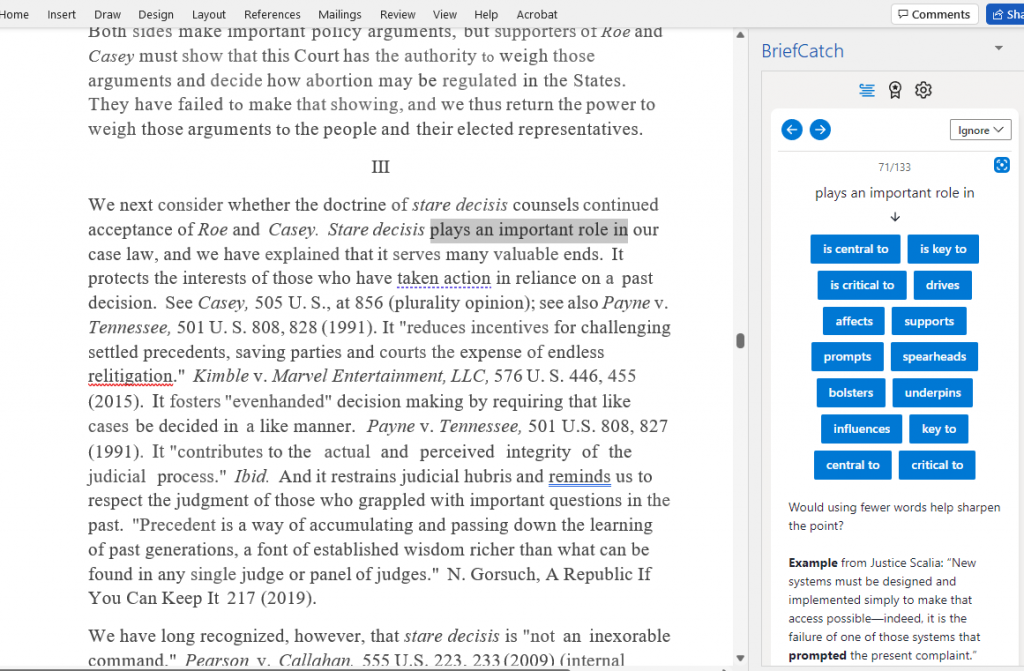 A central issue in the public debate about this draft is that of stare decisis — the principle that courts should adhere to precedent. Given that, this suggestion from BriefCatch seems prescient. Where Alito writes, “Stare decisis plays an important role in our case law,” BriefCatch offers no less than 14 alternative phrasings for “plays an important role.” One must believe that Alito gave careful thought to his words here, and some of the BriefCatch suggestions could subtly skew his intent with this phrase. 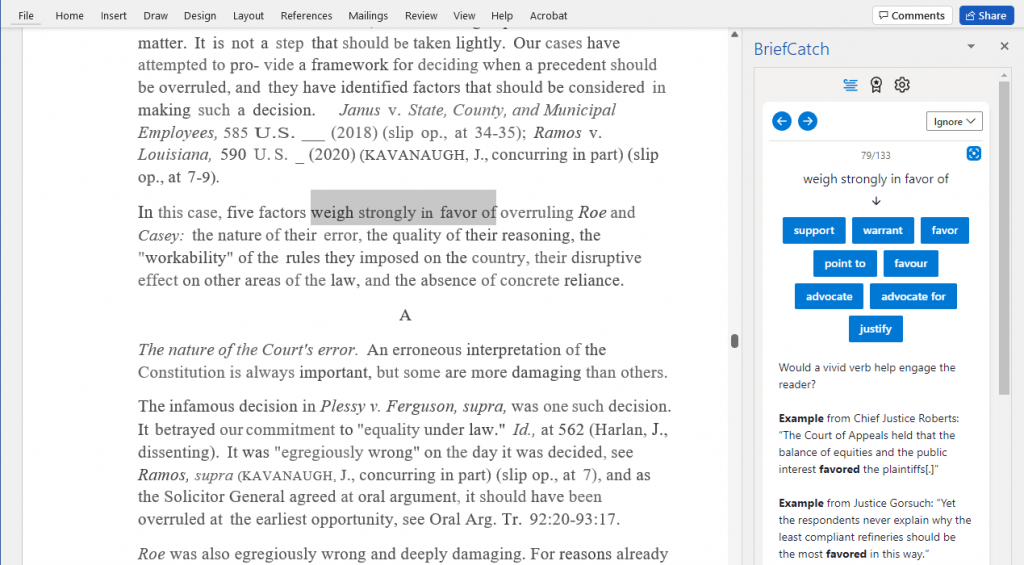 Here is another example of a phrase where one must assume that Alito carefully chose his words. Where he wrote, “weigh strongly in favor of,” would BriefCatch’s suggestions carry the same weight? 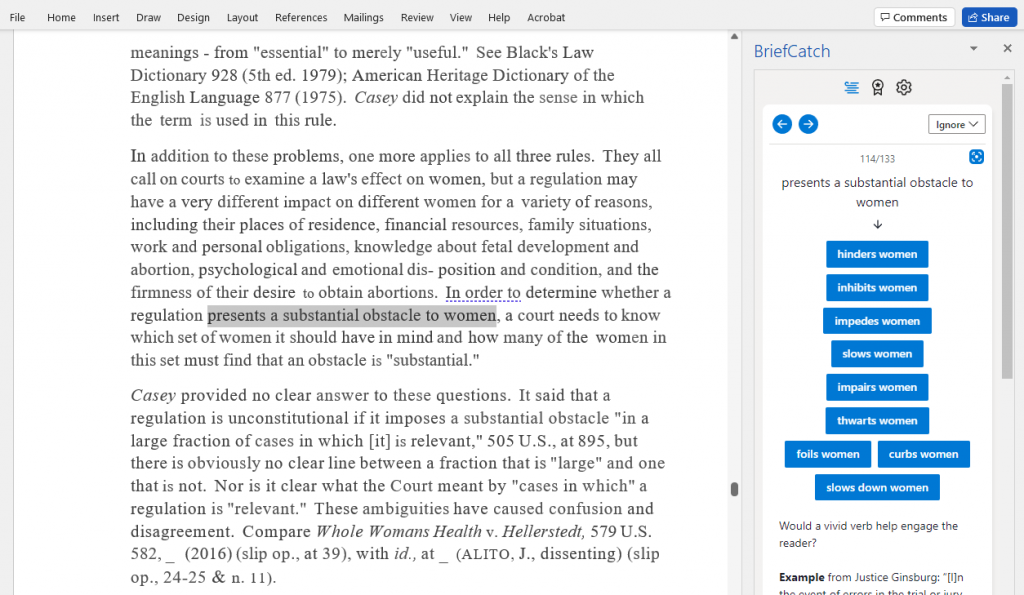 The last example I’ll provide is another where BriefCatch’s suggestion is unwittingly prescient of the public debate around this draft. To Alito’s phrase, “presents a substantial obstacle to women,” BriefCatch suggests “vivid” verbs, including “hinders women,” “inhibits women,” “impedes women,” “impairs women,” “thwarts women,” and “foils women.” While certainly more vivid, those verbs likely would not conjure the image Alito wanted.

Of the 133 edits suggested by BriefCatch, most are in similar veins to the examples I have provided. As I mentioned above, BriefCatch says that several Supreme Court justices use its product. Whether Alito beat me to the punch in using BriefCatch to analyze this draft, we’ll never know.