In April I reported on the release by the Global Legal Tech Report of its report on Australia, the first in a planned series of regional reports on legal tech worldwide, which will culminate in a global report in November.

Now, the GLTR has released reports covering Asia and New Zealand. When considered alongside the Australia report, they provide an overview of the state of legal tech across the Asia-Pacific region.

Taken together, the GLTR’s reports on Asia, Australia and New Zealand show that the majority of legal tech companies in the region are providers of integrated solutions rather than of point solutions.

But while the broad types of products are similar across the region, there was notable variance when companies were asked how they classify their products. In Asia, the largest segment of products are document automation (56%), compliance (41%), practice management (41%), legal operations (38%) and collaboration (38%).

But on a median-employee basis, the differences are less drastic. Asian legal tech companies have a median number of 10 full-time employees, while those in Australia have 7.5 and those in New Zealand have eight. 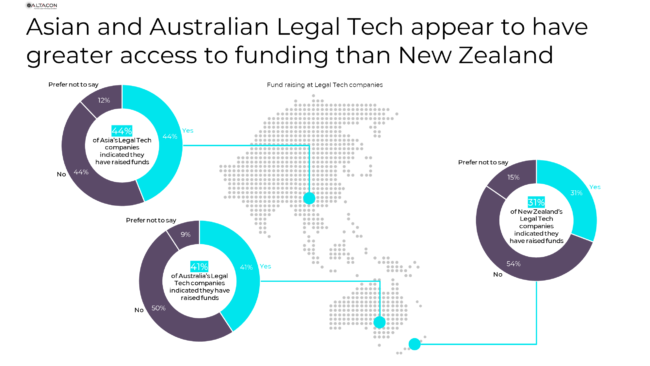 With regard to access to funding, GLTR found that Asian and Australian companies have greater access than New Zealand companies. In Asia, 44% of legal tech companies say they have raised funds. In Australia, that number is 41% and in New Zealand it is 31%.

A particularly interesting section of these three Asia-Pac reports is one that looks at the technologies that underlie legal tech companies’ products. With so much attention given to artificial intelligence in law, the dominant technology is not AI but is database technology, with databases being the underlying technology for 77% of products in Asia, 42% of products in Australia, and 69% of products in New Zealand.

In all three regions, legal tech companies are looking to expand sales of their products overseas. The reports show that this is true for 82% of Asian companies, 72% of Australian companies and 77% of New Zealand companies. 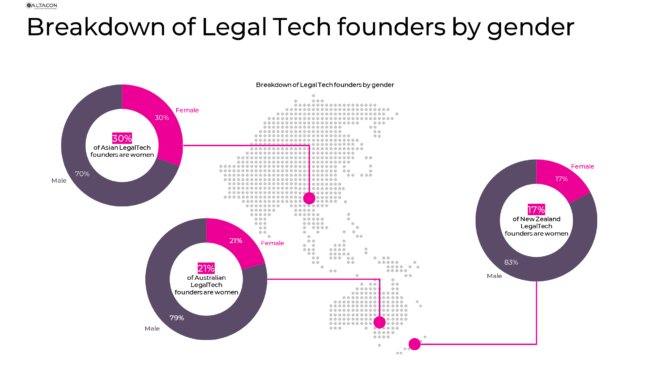 When I reported in April on the Australia report, I noted that one disappointing finding was that women are under-represented as founders or cofounders of legal tech companies, making up just 30%. While I was reporting on a preliminary version of the report, the current version puts the number of female founders in Australia even lower, at 21%.

As for how these companies price their products, the most common models overall are licenses and user-based subscriptions. By region, the top three pricing models are:

The three reports — which cover much more than I’ve discussed here — are available for purchase from the GLTR website at a cost of $399 each.

Due next is the report on Africa, with reports still to come on Europe, North and Central America, South America and the United Kingdom. A global report will be released later this year. All reports can be purchased as a bundle for $1,500.