The first in a new series of planned reports on legal tech globally looks at the market in Australia, where it finds good and bad — a vibrant and kaleidoscopic industry, but one where women are under-represented as founders or cofounders of companies.

“Our inaugural report on Australia’s legal tech companies reveals a vibrant, thriving and kaleidoscopic market, home to a diverse range of companies at many different stages of development,” said Stevie Ghiassi, director of the Global Legal Tech Report, board director of the Australian Legal Technology Association and CEO of Legaler.

This is the first in a planned series of regional reports that will culminate in the release of a global report in November. The reports are being undertaken in collaboration with major legal technology associations from around the world.

The full Australia report will be released during a Webinar on Wednesday, April 8, 12:30 p.m. AEST (which is Tuesday, April 7, 10:30 p.m. EDT). I was provided with a summary of the report’s findings last week.

According to the summary, the Australian research revealed three key themes:

1. Women make up fewer founders and have different focus.

The report found that just 30% of Australian legal tech companies have women as founders or cofounders. It noted that this aligns with the under-representation of women at senior levels in Australian law firms, where 28.5% of partners in the country’s 50 largest firms are women.

It also found that companies founded by women are more likely to focus on a broader market than just law firms are are also more strongly focused on the domestic market, with 44% of companies with women founders interested in international expansion compared to 84% of those without women founders or co-founders.

(This is consistent with a study I reported on in 2018 by Kristen Sonday, cofounder and COO of legaltech startup Paladin, a pro bono management platform, that found that women and people of color are significantly underrepresented among legal tech founders. A more recent study, which I reported on in March, conducted by Dana Denis-Smith, CEO of Obelisk Support in London, found that women-founded “new law” and legal tech companies lagged far behind in outside investment.)

2. Only 30% of companies focus on AI, but they are thriving. 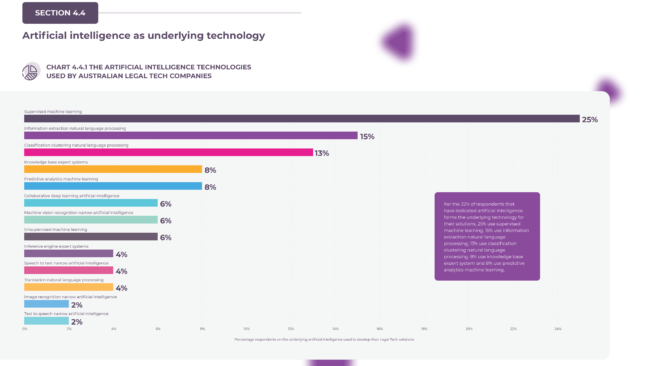 Even as artificial intelligence continues to dominate the headlines, it is not the primary technology behind Australia’s legal tech industry. Just 30% of legal tech companies identified AI as their core technology engine.

Those companies, however, “are bullish on the future,” the summary said, employing twice as many developers, almost universally planning to increase their developer teams, and having more ambitious international growth plans than non-AI companies. 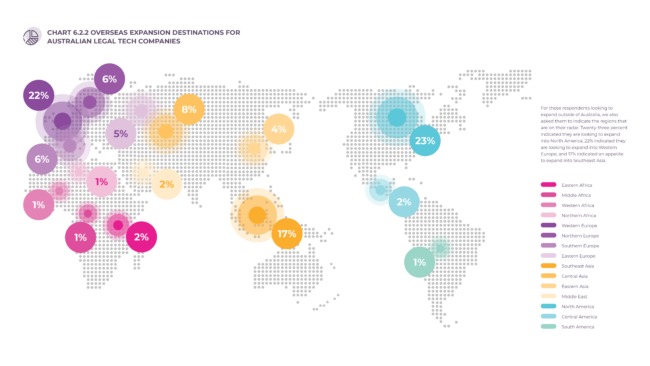 Impact of COVID-19 on Findings

Given the report’s finding of a vibrant legal tech industry in Australia, I asked Ghiasi, the report’s global director, how the current COVID-19 crisis might impact these findings going forward. He provided this statement:

“The full effects of the COVID-19 pandemic are yet to be felt by the global economy, with an impending recession or possibly depression looming as it becomes increasingly apparent that the worst is yet to come. Major professional services firms, especially law firms, have already started cutting jobs, implementing hiring freezes and reducing partner pay, in an effort to survive the fallout from the Coronavirus.

“This downturn will drastically impact the legal technology sector, not only in Australia, but globally, as evidenced by the early job cuts at e-Discovery vendor Disco. Anecdotally, law firms have already been quick to put a pause on many legal technology projects that weren’t considered business critical, having a shuttering effect on many of Australia’s emerging legal tech companies. In the past, the Australian economy has shown great resilience, as one of the only nations to not fall into a recession during the financial crisis, however, the crippling effects of this virus will present an unprecedented challenge for all.

“Despite the doom and gloom, the sudden shift to remote work is seeing many law firms ‘forced’ to adopt cloud-based collaboration tools like video conferencing, e-signature and matter management tools, which will see a handful of legal tech companies emerge as winners. The only positive news for now is that many lawyers and firms that had previously considered legal tech as an afterthought, have now had their first taste, with hopefully lasting effects that will drive greater adoption in the future.”

The Australian report will be available for purchase for $399 (U.S.). According to the summary, the full report provides the following information about Australian legal tech companies:

The next report in the series will cover New Zealand and Asia and will be released May 29 at ALTACON, the virtual 2020 conference of the Australian Legal Technology Association.