Four years ago, I reviewed the proofreading software PerfectIt, an add-in for Microsoft Word, writing that using it was “like having a virtual, eagle-eyed proofreader on your staff.” 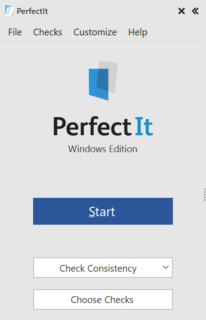 I’ve been testing PerfectIt 4 for several weeks now, using it to check a variety of documents — both legal documents and documents of other types.

While PerfectIt struck me as pretty close to perfect back when I reviewed it in 2016, this latest version is even better. The improvement in speed is noticeable and the changes to the interface make it easier to review and make decisions about PerfectIt’s suggestions.

Most notably for legal professionals, this latest version comes with a major update to PerfectIt’s ability to check legal style, adding more than 12,000 legal-specific corrections for a total of over 25,000.

This legal style sheet, called American Legal Style, is what makes this product ideal for legal professionals and what most distinguishes it from other proofreading software.

Developed by lawyer Ivy B. Grey, an advisor to PerfectIt and vice president of strategy and business development at WordRake, American Legal Style checks spelling, capitalization, hyphenation and italicization in legal terms based on Black’s Law Dictionary and finds errors in case citations based on The Bluebook: A Uniform System of Citation. I

t also suggests style tips from The Red Book: A Manual On Legal Style by Bryan Garner and The Elements of Style by Strunk & White.

Checks for Consistency and Usage

The basics of using PerfectIt have not changed since my 2016 review, so I encourage you to read that if you are interested in learning more about the product.

In a nutshell, when you launch it in Word, it runs more than three-dozen tests to analyze your document, presenting its suggestions in a panel to the left of the document. I won’t list all the tests, but in addition to the legal style, it also looks for consistency and proper usage in:

After you are done checking a document in PerfectIt, you can also use the software to perform various tasks to finalize it, such as updating the table of contents and cross-references, accepting tracked changes, removing comments, and clearing metadata.

It is worth noting that PerfectIt is not an alternative to WordRake, another document-checking program popular among legal professionals. As I noted in another prior post, WordRake is focused on enhancing clarity and concision, whereas PerfectIt is a proofreading tool that makes granular suggestions about punctuation, formatting, citation style, capitalization, and more.

One of the most notable enhancements in PerfectIt 4 is the speed with which the software performs its initial scan and analysis of a document. While it did not really take all that long before, there was a noticeable time lag as it ran through each of its various tests to analyze the document.

The lag has not disappeared, but the analysis is now noticeably faster, to the point where I no longer felt like I was idly waiting for it. It performs the tests in series, presenting the results of one and waiting for you to act on those before moving on to the next. No single test ever took more than seconds on the various documents I tried.

PerfectIt’s own marketing materials say the change in speed is dramatic. The company said that a 75-page medical research report that used to take 33 seconds to scan now takes 13.

Also new in PerfectIt 4 is a redesign of the review panel that makes it easier to review the potential errors and issues it finds and decide how to address them. This redesign makes it easier to see the issue in context from within the panel and individually choose whether to fix each one. There is also the option to “fix all” within a category of tests.

I mentioned that PerfectIt comes preloaded with American Legal Style, but this is just one of a number of the style sheets that you can turn on or off within the product. Each style sheet is a distinct set of rules governing spelling, formatting, punctuation, hyphenation and capitalization.

Select from a variety of style sheets.

I am a strong believer that no important legal document should leave a law office without review by a second set of eyes. But that is not always possible, especially for professionals in solo practices and smaller firms.

You can try PerfectIt for free for 14 days without having to put down a credit card. After that, the cost is $70 per user per year, with discounts for larger organizations. One license covers all a user’s devices, and the program can run on PCs, Macs and iPads.

That is a small price to pay for peace of mind and avoiding embarrassment. You may not accept every fix that PerfectIt suggests — in fact, I find that I reject the majority of them. But at least when you are done checking with PerfectIt, you can feel confident that your document is, at least in style and formatting, close to perfect.