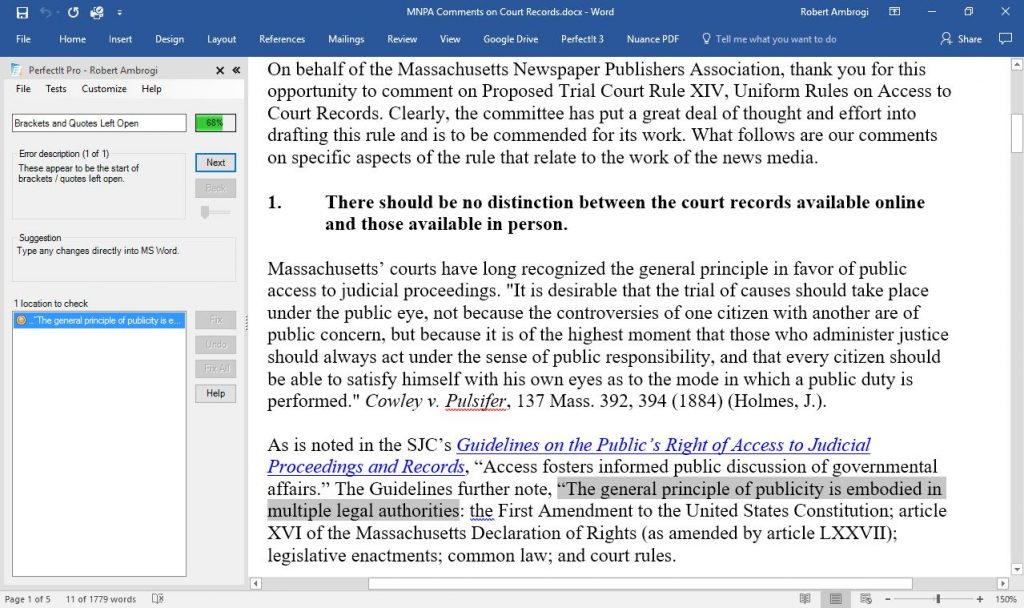 Whoops. PerfectIt caught my failure to use closing quotation marks.

For several months now, I have been meaning to try out PerfectIt, an add-in for Microsoft Word that finds consistency and proofreading mistakes. PerfectIt includes a style sheet specifically designed for lawyers, called American Legal Style, and yesterday that style sheet got a major update. Knowing the update was coming, I was spurred to finally install the software and give it a spin. Now that I have, I may never again send out a document without first running PerfectIt.

PerfectIt is like having a virtual, eagle-eyed proofreader on your staff. It scours your document for inconsistencies in usages and styles and other mistakes. For example, if you have sometimes hyphenated a phrase and sometimes not (“short-term” versus “short term”) it will point this out to you. If you have spelled the same word differently (“color” versus “colour”) it will point this out. It lets you specify your preference for Oxford commas and then ensures you are consistent. (I’m in the non-Oxford camp.) The full list of what it checks is too long to include in this post. 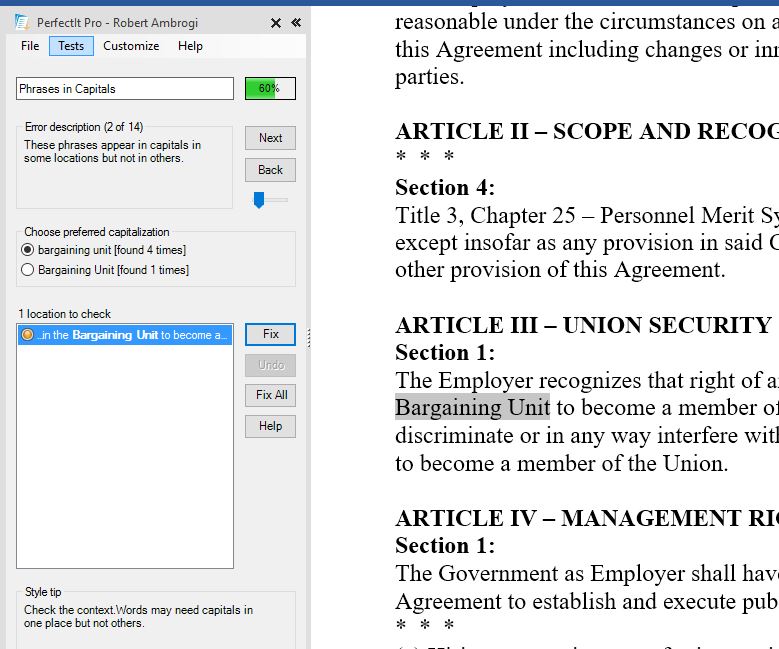 PerfectIt finds that the same phrase appears both capitalized and not.

On top of that, PerfectIt comes loaded with a variety of style sheets, one of which is American Legal Style. When this style is selected, PerfectIt also checks spelling, capitalization, hyphenation and italicization in legal terms based on Black’s Law Dictionary; finds errors in case citations based on The Bluebook: A Uniform System of Citation; and suggests style tips from The Red Book: A Manual On Legal Style by Bryan Garner and The Elements of Style by Strunk & White.

American Legal Style first became available in PerfectIt last October. Yesterday’s update, the first for the legal style sheet, added more than 5,000 corrections. According to Ivy B. Grey, the lawyer who is the author of the legal style sheet, many of these new corrections focus on errors in citations such as misplaced periods, transposed letters in court names and missing or extra spaces.

For example, “E.D.T.X.” will now be corrected to “E.D. Tex.”, Grey said, and incorrect citations to bankruptcy courts as “bank.” will be corrected to “bankr.” Additionally, the style sheet will look for accidental repetition of certain legal phrases that are often missed when merging multiple documents. It will also find legal-specific typos caused by dictation software and autocorrect, such as “statue” rather than “statute.” Plus, embarrassing, yet common, typos in the names of some of the most prolific judges and Supreme Court Justices will also be spotted, such as “Justice Scales” rather than “Justice Scalia.”

Some of you reading this may be familiar with WordRake and be wondering how it compares to PerfectIt. One program is not a substitute for the other. WordRake is an editing program for lawyers that focuses on enhancing clarity and concision. It does not perform the granular proofreading that PerfectIt does. In fact, a PerfectIt white paper on proofreading software describes the two add-ins as complementary and suggests lawyers use both.

(See my evaluations of WordRake and WordRake Version 2.0, in which I tested the software against some of the best writers on the Supreme Court.) 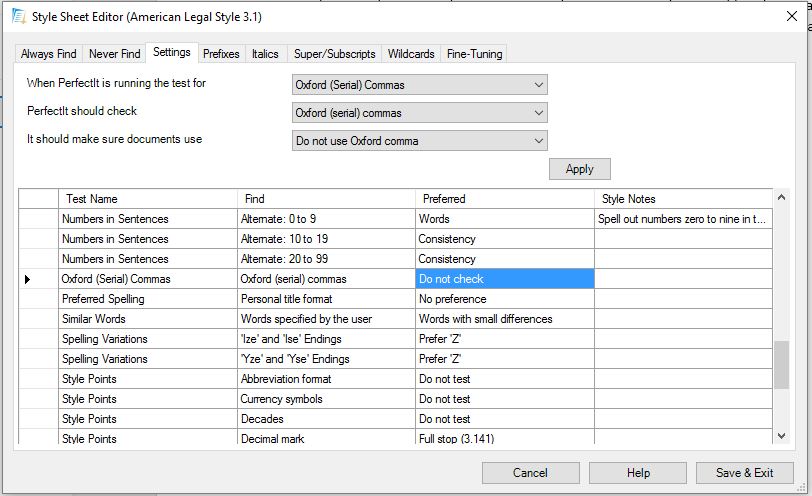 Edit style sheets to suit your preferences or create a custom style sheet.

PerfectIt installs in Word’s toolbar. To use it, select Launch PerfectIt from the toolbar. It opens a panel to the left of your document where it shows the possible errors it finds as its runs its various tests. Similar to using spellcheck in Word, you can fix errors automatically or manually. Where there are options, such as two spellings of the same word, you can pick the one you want.

PerfectIt provides a variety of customization options. Besides choosing from different style sheets, you can also choose which tests to run and set various options for how it runs them. You can also teach it to use your own (or your firm’s) style preferences. For example, if your firm has a style guide that defines preferred spellings for certain words, you can easily add these to PerfectIt. You can also tell it to ignore specific words or phrases.

After PerfectIt is done proofreading your document, it offers additional options for finalizing the document. One I appreciate is to automatically convert all instances of two spaces to one. Others include generating a table of abbreviations, accepting all tracked changes, removing all comment boxes, updating the table of contents, updating cross references, generating a report of all the changes it made, compiling all the text in comments into a separate window, and removing spaces before punctuation such as commas and question marks.

After it completes proofing, PerfectIt offers options for finalizing the document.

PerfectIt runs more than three dozen tests. I won’t list them all here, but they all fall into these groups:

As noted above, the legal style sheet enhances these tests with legal-specific styles, usages and terms. For example:

I have now used PerfectIt with several different types of documents. In one, it found an instance where I failed to close quotation marks. Whoops. Fortunately, that was all it found there. In an arbitration decision, it suggested I hyphenate “collective-bargaining” in the phrase “collective bargaining agreement.” (I declined.) It found instances of both “rehiring” and “re-hiring.” It questioned the use of “pursuant to” as legalese and suggested “under” instead. It found that I had capitalized the phrase “bargaining unit” in some instances and not in others.

The only oddity I encountered was the suggestion that I change “spelled” to “spelt.” While the latter is used in the UK, where PerfectIt originated, the former is correct in the U.S. I also caught one mistake: In the context of a sentence, it suggested using the full word “versus” in place of the abbreviation “vs.” I accepted this, but then I almost missed that PerfectIt failed to remove the period that followed the abbreviation, leaving an inappropriate period in the middle of the sentence.

You can download a free trial of PerfectIt and test it out for 30 days. If you decide to purchase it, the one-time price is $99, with discounts available for bulk purchases. It works with all versions of Word since Word 2000. It is not Mac compatible.

At this price, PerfectIt is a bargain, especially for solo and smaller-firm lawyers who often do not have a second set of eyes around to check their documents before they go out. It only takes a few moments to run this add-in before finalizing a document. It could save you from an embarrassing mistake or worse. When you think your document is done, run this software and, as the name suggests, perfect it.