Last Friday, I wrote here about the launch by Thomson Reuters of Quick Check, its version of a growing array of brief-analysis products that let lawyers upload a brief and discover relevant cases the brief missed. Now comes another such product, as Bloomberg Law gave a preview of its forthcoming brief analyzer during an event last night at the American Association of Law Libraries annual meeting.

The legal research company Casetext introduced the first brief analysis product, CARA, in 2016. It uses artificial intelligence to analyze users’ uploaded briefs and find relevant cases the document missed. Since then, other legal research companies have developed brief-analysis products of their own, including EVA from ROSS Intelligence, Clerk from Judicata, Vincent from vLex, and then Quick Check last week.

Bloomberg is calling its product Brief Analyzer, but says the name is a placeholder for now and may change. Bloomberg will begin beta testing the product with customers in September and then schedule a release date based on the feedback from that testing. The company expects to release the product to general availability before the end of the year.

Yesterday, I was given a demonstration of a working prototype of Brief Analyzer. In its current stage of development, it is designed for a specific use case – speeding up the process through which a litigator (or litigation associate) responds to an opponent’s brief. 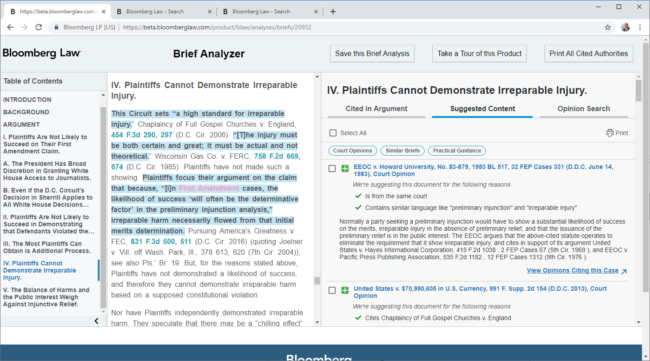 Brief Analyzer suggests opinions relevant to the arguments in the brief.

This differs from the products, which are designed to serve the dual purposes of both betting an opponent’s incoming brief and double-checking your own outgoing brief. Joe Breda, president of Bloomberg Law, said that the final version of Brief Analyzer will address both of these uses.

In this prototype version, a user can upload a brief in PDF format, either image-only or text-recognized. It does not take Microsoft Word documents, but again Breda said it would have that capability in the release version.

In other brief-analysis products, the initial display of results shows cases and authorities that are relevant but not cited in the brief. Brief Analyzer’s initial display defaults to show all of the authorities that are included in that section of the brief. This is in keeping with that use case of responding to a brief. If you receive an opponent’s brief, you would most likely start by checking the authorities it did cite, not the ones it did not.

Within this “Cited in Argument” view, the user can click buttons to see only the opinions or only the statutes, or to see related references from Bloomberg’s Points of Law feature. A user can also, with one click, print all of the cited authorities. As the user clicks on opinion citations in the brief shown in the middle panel, the right panel shows the relevant section of that opinion in the right panel. This is a nice feature, in that it does not simply bring up the case, but it takes you to the point in the case cited or discussed in the brief.

To see Brief Analyzer’s suggestions for relevant authorities missing from the brief, the user selects the “Suggested Content” tab at the top of the results screen. As the user looks at each of the suggested cases and authorities, the top of the case includes a concise explanation of why that authority is being suggested. The examples I saw during the demonstration included explanatory phrases such as “Is from the same court” and “Contains similar language like irreparable injury.”

Here again, this is a nice touch. Other brief analyzers often leave you guessing as to why they are suggesting a particular reference. These explanatory notes are straightforward time savers. 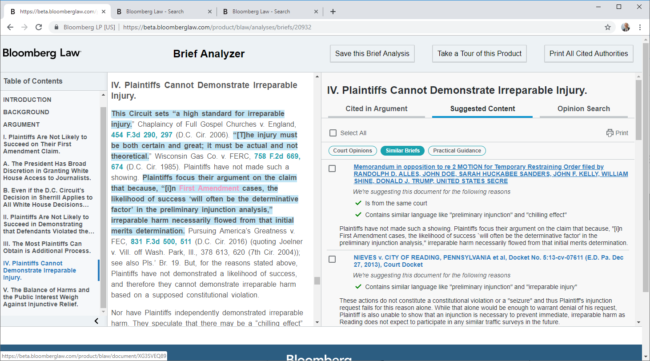 Brief Analyzer also suggests briefs that may be relevant to the argument.

Included within Brief Analyzer’s suggested content are other briefs, meaning it suggests not only relevant authorities, but allows you to access other briefs that are on point to the section of the brief you are analyzing.

Also includes with suggested content are links to Bloomberg Law’s Practical Guidance suites, which are collections of practice tools designed to help lawyers get quickly up to speed on a topic. Within Brief Analyzer, these could be useful for an associate who does not have deep familiarity with a topic addressed in the brief. Later versions of Brief Analyzer will also include references to books and treatises within Bloomberg Law. 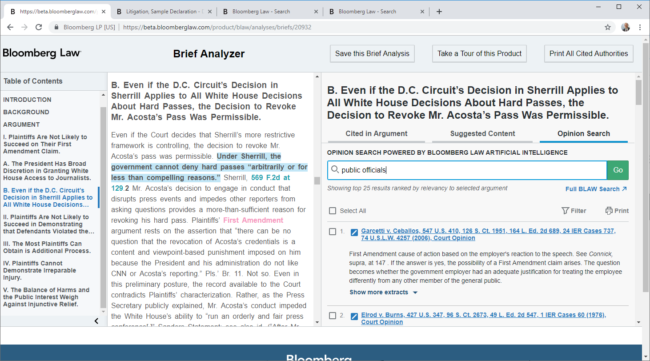 Conducting a search within Brief Analyzer returns results relevant to the section of the brief.

A third tab in the results screen – besides Cited in Argument and Suggested Content – is Opinion Search. The thinking here is that a lawyer reviewing a brief may not want to stop with the results suggested by Brief Analyzer, but may want to perform further research. By performing a search from within Brief Analyzer, the lawyer will get results tailored to the section of the brief currently displayed. This is a nice feature, and not one that other products have exactly.

A concern with brief-analyzer tools is what happens to your brief after you upload it. Breda said that Brief Analyzer will give users a choice. If they want, it will store the document within their account. If they do not want it stored, the information will be deleted at the end of the search session. Either way, the document will be encrypted at all times and, if saved, stored in a highly secure data center.

As with other Bloomberg Law products, Brief Analyzer will be available to all subscribers as part of their subscription cost.

Breda said that Bloomberg Law will be putting a lot of work into developing Brief Analyzer over the coming months and getting it ready to launch. Given the other products already on the market, I suspect the company will be trying to have it ready as soon as can practically be done.

That said, the working prototype I saw demonstrated suggested that Brief Analyzer will be a strong competitor to the other products. As I described above, it has several nice features that the others do not. The jury will be out until we see the final product, but it looks like Bloomberg Law is on the right track.