A majority of e-discovery professionals now use cloud e-discovery software, with cloud software providing clear advantages for easing workflows, lowering costs and reducing common challenges, according to a survey released today by the cloud-based e-discovery company Everlaw in partnership with the Association of Certified E-Discovery Specialists (ACEDS).

The survey, 2022 Ediscovery Innovation Report: Leaders and Laggards, found that, of the 195 e-discovery professionals who responded, 43% used a cloud platform as their primary e-discovery solution and 14% used a hybrid cloud platform, as opposed to 38% using an on-premises platform.

Perhaps even more telling, the number who use a cloud-based platform managed in-house doubled in a year, from 10% in 2021 to 24% this year. 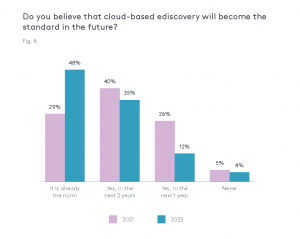 “Once an outlier, cloud-based ediscovery has moved increasingly into the mainstream of legal practice,” the survey says.

Read more about Everlaw in the LawNext Legal Technology Directory.

As its title suggests, the survey draws a clear distinction between the “leaders” who have moved to the cloud and the “laggards” who have not.

Those using cloud software were less likely to report having encountered challenges in several key aspects of e-discovery, the survey found. Here are how the results broke down for several common issues:

But the survey said this issue of cost predictability should not be confused with that of overall cost. The survey found that more than half of cloud users ranked cost savings as a main advantage of moving to the cloud.

In fact, the survey found that users of on-prem software reported paying more at every step of the e-discovery process from translation services (84% of laggards report paying extra, compared to 29% of leaders), to security features (40% vs. 21%), and advanced analytics (40% vs. 19%). For data processing, laggards report paying nearly four times the rate of leaders, 22% compared to cloud leaders’ 6%. 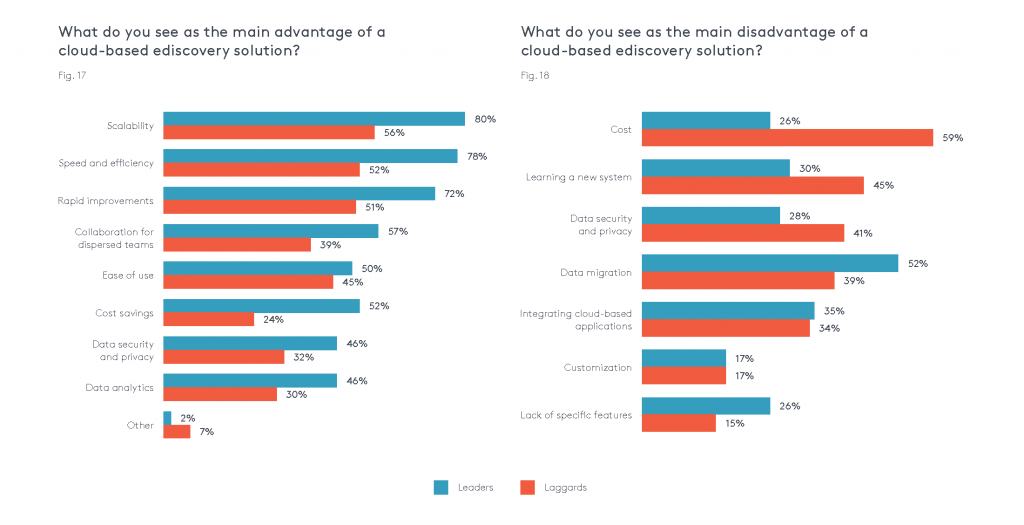 An interesting finding of the survey is the extent to which cloud users and on-prem users differ in their perceptions of the cloud. Those using on-prem software perceive the cloud as hard to learn and expensive, while those already in the cloud disagree:

“When it comes to e-discovery,” the survey concludes, “the legal industry’s transformation to the cloud is well on its way.”

And those who are “leaders” in moving to the cloud, the survey says, see significant benefits across the board.

“Leaders do not just see reduced challenges and greater technological utilization — advantages enough on their own — but they are more likely to improve internal processes, leverage staff more efficiently, adopt innovative cost-savings measures, and move faster and
more effectively.”

Download the full 21-page survey report at this link.