Home now from ILTACON, the annual conference of the International Legal Technology Association. It is five frenetic days of seminars, exhibitors and networking by legal technologists and vendors from all over the world. Here are some of my somewhat-random thoughts about the event.

Let’s start with what many were thinking: Orlando in August? I mean, WTF? But, guess what – the weather gods cooperated and kept any significantly stifling heat at bay. The threat of thunder showers was persistent, forcing the opening night reception to move indoors, but even the rain mostly held off.

I heard some griping about the hotel, the Walt Disney World Swan and Dolphin – mostly about the outdated rooms and the walking distances. The Swan and Dolphin are separate hotels connected by an outdoor walkway. It takes no more than five minutes to walk from one to the other, but with programs in each, the back-and-forth-and-back-again trek ensured attendees easily got in their daily 10,000 steps. For those uninclined to walk, golf carts sponsored by Litera and Traveling Coaches provided rides between the buildings. 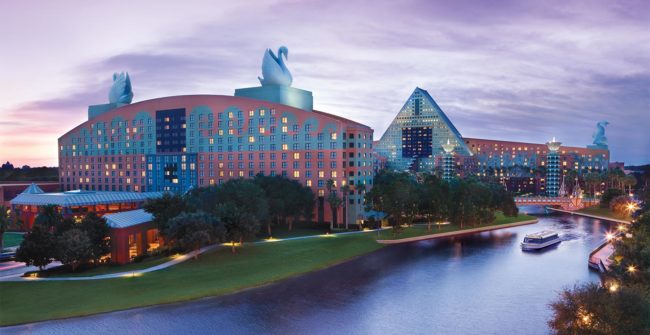 The Swan and Dolphin resort.

Personally, I liked the hotel as a conference venue. The registration area, exhibit hall, and most meeting rooms were easily accessible. And the main hotel, the Dolphin, had a large lobby bar that served as the always-buzzing center of networking, well into the late evening. Both hotels had a variety of restaurants and fast-food offerings, so pretty much anything one might need to survive the week could be found on premises.

Attendance made it the largest ILTACON ever. Advance, full-week registration was 1,785, and ILTA expected that to meet or surpass 1,800 by final count. Adding in single-day registrations, ILTA said the full attendance would be 1,850. Last year’s total was 1,715. Eight hundred of this year’s attendees were first-timers.

On top of that, there were another 1,700 registrations by “business partners,” a category that includes vendors, members of the press, and others who are not ILTA members. Two-hundred companies had booths in the exhibit hall.

In an effort to make the conference greener, ILTA banned plastic water bottles and provided each registrant with a stainless-steel cup and plenty of places to refill it. As far as I could see, ILTA did not embrace #gagtheswag, as the exhibit hall’s 200 vendors offered plenty of swag to bag.

Speaking of the exhibit hall, for the second year it included a Startup Hub highlighting eight legal tech startups. I was glad to see two companies there that had also participated earlier this year in the Startup Alley I help organize for ABA TECHSHOW – Connective Counsel, whose client-facing app ConnectIVITY I wrote about earlier this week, and DocStyle, which automatically converts PDF files and styles word documents.

Others in the Hub were: AcuityKM, which provides AI-powered tools to enhance applications law firms already use; Canopy, which offers data mining for incident response; Infinnium, which uses AI to help organizations better manage their data; Lunar, which offers sales and marketing technology; MeasuredIn, which offers automated tools for managing M&A transactions; and Scissero, which says its AI technology can review, analyze and draft contracts.

A highlight for me was participating on a panel of legal tech journalists to discuss trends in the industry. If you’ve got 90 minutes to kill, the audio of that panel has been posted by ILTA. The panel was moderated by Gina Passarella, editor-in-chief, ALM Media, and also included Caroline Hill, editor-in-chief, Legal IT Insider; Zach Warren, editor-in-chief, Legaltech News; and Roy Strom, reporter, Bloomberg Law.

When the journalists were not prognosticating on stage, they could be found in the press room that ILTA provided. The room was much appreciated, as it gave us a place to meet with company executives for briefings and demonstrations. And the fact that ILTA kept it stocked with snacks made it all the better. But next year, ILTA, give us coffee!

Also on my wish list for next year: A podcast booth. I recorded one interview there for my LawNext podcast, but lacking a quiet place, I was forced to record it in the press room, among a hubbub of background conversations and the decision by hotel staff to at that moment disassemble tables and chairs. 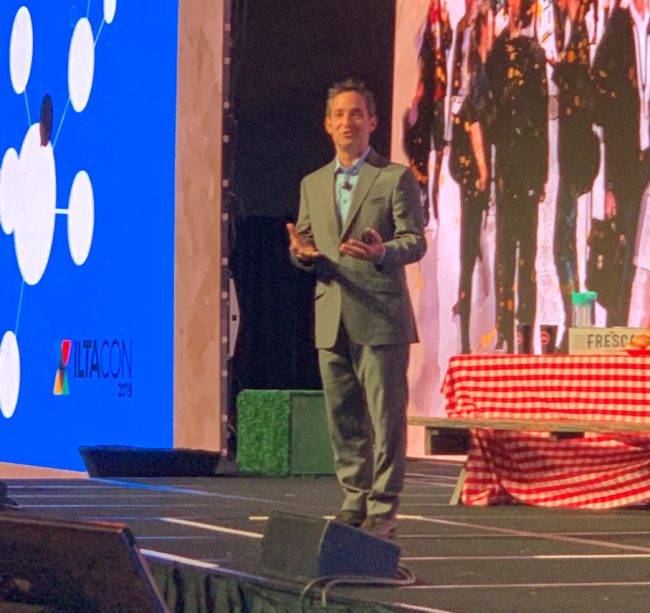 Apart from that, I regret to say, my schedule was so full of meetings that I made it to only one other session, the opening keynote by author and entrepreneur Josh Linkner, who spoke on harnessing innovation. There should be a special place in heaven for keynoters at large conferences, because it can be a thankless task – except of course for the large speaking fees some of these folks command.

Judging by the twitter stream and people I spoke with, Linkner won over the audience with his entertaining style and engaging stories of innovation across industries, including the crowd-pleasing tale of how a social media hoax about a public book burning saved the public library in Troy, Mich.

But Linkner suffered the fate of so many generic innovation speakers at legal conferences – he never connected the dots to the legal industry (even though his mother and stepfather were both lawyers). Instead, he offered platitudes, such as, “Those who say it cannot be done should not interrupt those doing it,” and then closed with two “action items,” one of which was to subscribe to his daily email and the other to “discover one fresh idea” every day for a week.

In terms of the technology on display, probably the most talked about company was Reynen Court, which is often described as creating an app store for legal. Its mission is to make it easy for law firms and legal departments to adopt and manage cloud-based software without having to trust firm or client content to the cloud. During the conference, I interviewed founder Andrew Klein for my LawNext podcast, and we will be posting that episode soon.

This reflect the continuing interest in a trend I wrote about in my 2018 wrap-up, The 20 Most Important Legal Technology Developments of 2018, and that is the platformization of legal tech – an extension of the model that made Salesforce so successful, turning itself from an application to a platform. As I noted then, this is a big part of the going-forward strategy for both iManage and NetDocuments, and is behind such recent acquisitions as Thomson Reuters of HighQ and Intapp of OnePlace. 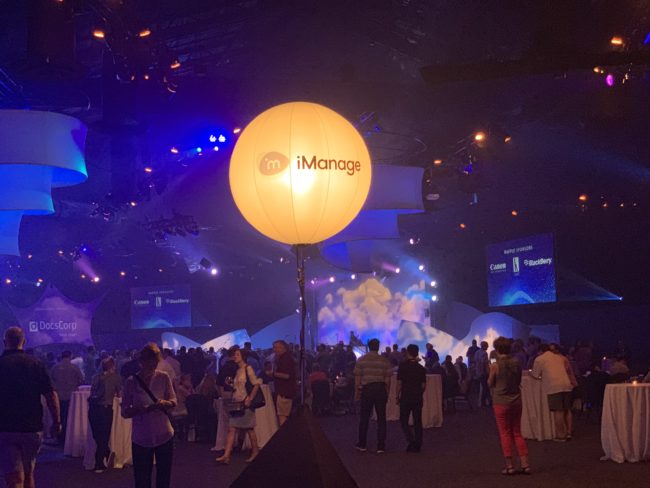 Of course there were over-the-top parties.

For me, perhaps the most memorable aspect of the conference was not a product or an event or an exhibitor. Rather, it was the palpable sense of an organization reinvigorated.

The fact is, it had been a tough three years for ILTA, and the bad news always seemed to drop just as the conference was about to start.

To recount: In 2016, just a month before the conference, ILTA was rocked by news that its long-time executive director Randi Mayes would retire. Then, in 2017, just days before the conference, ILTA reshuffled its top management, replacing several veteran executives. In 2018, it was déjà vu all over again, as ILTA announced – again just days ahead of the conference – that the CEO who had replaced Mayes would be leaving. Dissatisfaction over the 2017 reshuffling led some longtime ILTA members to break off and form an alternative group, the Association of Legal Technologists.

So this conference was the first in three years that did not kick off with last-minute news of executive reshufflings. In fact, quite the opposite occurred. Last October, ILTA brought on Joy Heath Rush, a former Litera vice president, as interim CEO, and then in February, it named her permanent CEO. Rush is widely respected and liked in the industry, and she and ILTA’s leadership have been working hard to restore a sense of spirit and camaraderie that some felt had been diminished or lost. 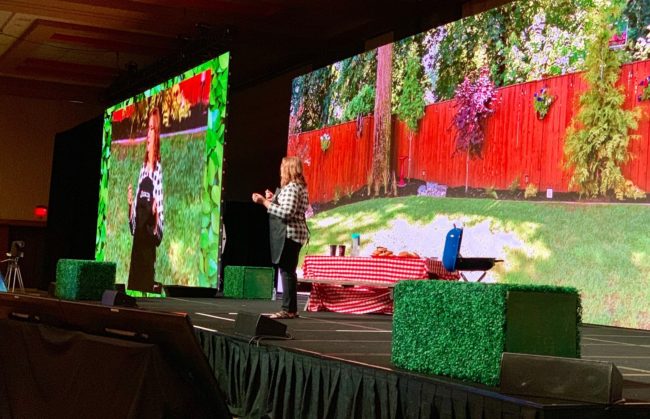 Rather than a staff shake-up, this year’s conference started with an opening session that had Rush on stage, standing in an apron at a barbecue grill and framed by a background screen that depicted a backyard, and enthusiastically greeting the crowd, “Welcome ILTA to our annual family reunion!”

In place of formal opening comments, Rush welcomed a variety of “old friends” to her faux barbecue – such as the VP in charge of ILTACON Dawn Hudgins and conference co-chairs David Hobbie, KM director at Goodwin Procter, and Julie Brown, director of practice technology at Vorys – each coming one by one on stage and offering brief remarks in the form of a conversation at a friendly backyard barbecue.

It was an opening that set the tone for the entire conference. In the end, ILTACON is all about networking. And even with 800 first-time attendees and a total crowd of some 3,500 people, it somehow managed to feel like that family reunion Rush alluded to. For a family that had been through a few squabbles in recent years, it was good to get back to enjoying the barbecue.