This appears to be only the second court in the United States to offer ODR for all small-claims cases. A November 2017 survey by the National Center for State Courts found only three U.S. courts using ODR in any capacity. Just one of those three, the Franklin County Municipal Court in Columbus, Ohio, is using it for all small-claims cases. The other two are using it for review of traffic tickets or warrant issuances.

The ODR programs of the three courts cited by the NCSC all use an ODR platform, Matterhorn, from a company called Court Innovations. The company’s website lists a total of 36 U.S. courts (28 in Michigan) using its platform. Again, however, all but Franklin County appear to be using it only for limited purposes — mostly traffic, warrant or tax cases — not across all small-claims cases.

In Utah, the court system sees the use of ODR as an opportunity to increase access to justice by bringing tools for dispute resolution directly to participants and to increase engagement with the courts by making them more convenient and accessible, according to a document prepared by the court and provided to me by Catherine J. Dupont, appellate court administrator.

The pilot program begins tomorrow in the West Valley City Justice Court. All small claims cases in that court will be required to participate in ODR, except for a few that meet strict exemption criteria (such as a lack of Internet access).

The ODR program can be accessed from both computer desktops and mobile devices. Parties will be able to communicate via chat, upload documents and prepare settlement agreements.

A plaintiff’s filing of a small claims affidavit and summons begins the ODR process. The plaintiff must log into the account within seven days or the case is dismissed without prejudice. The summons served on the defendant provides directions on logging in to the ODR site.

Once logged in, the defendant is asked a series of generic questions designed to determine the extent to which the defendant agrees or disagrees with the claim and willingness to enter into a payment plan as part of a settlement. If the defendant fails to log in within 14 days, a default judgment may be entered. However, a defendant may ask to bypass ODR if the defendant needs ADA assistance, does not speak English, or does not have Internet access. 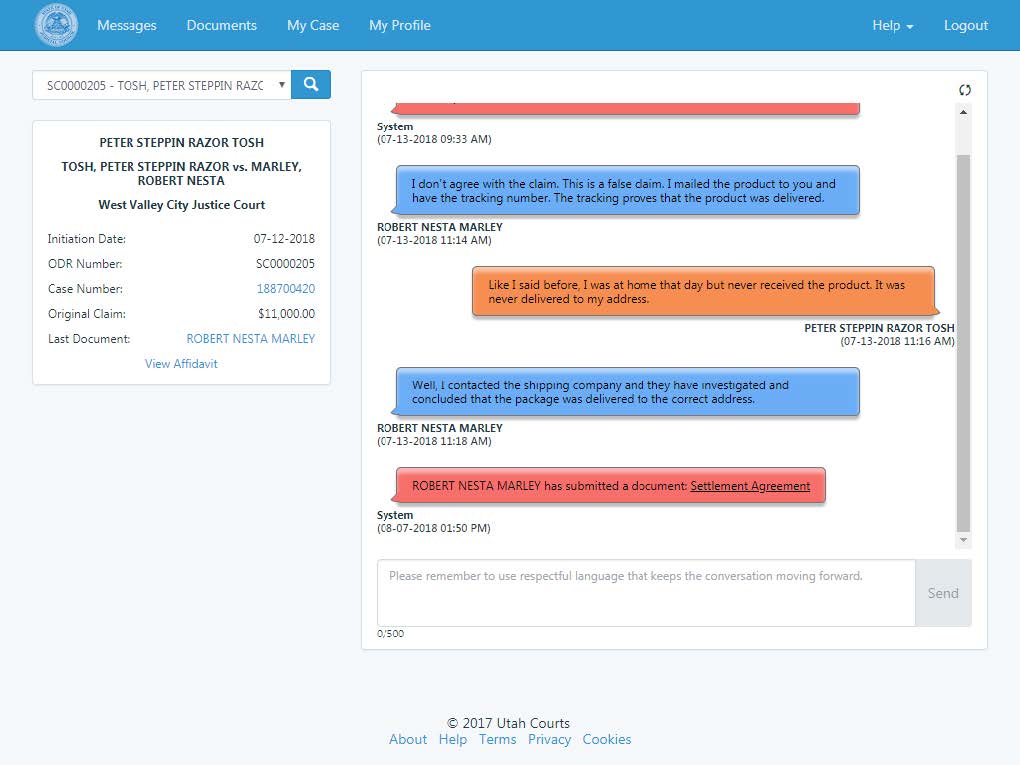 After both parties have logged in, a facilitator is assigned to the case. The facilitator guides the parties through a discussion of the issues in the case and the possibility of reaching an agreement. The facilitator also can assist in finalizing documentation for a settlement or trial preparation. All of the parties can see all of the chat messaging and uploaded documents. 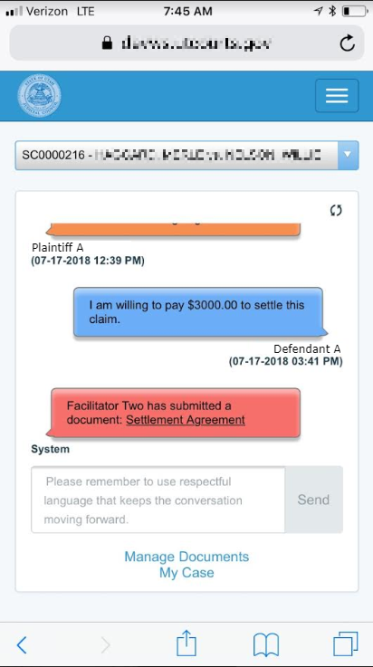 Mobile view of the ODR chat.

If the parties are unable to reach agreement within two weeks, the facilitator prepares a trial preparation document summarizing both parties’ positions. Both parties are expected to sign this (it is not clear what happens if either does not), and it is then submitted to the court and the case returns to the normal small claims docket and is scheduled for trial. Documents submitted during ODR do not automatically become part of the court record and would have to be submitted at trial.

This is one of those smallish steps that is suggestive of something bigger. In a talk I gave earlier this year to the Legal Services Corporation on The Innovation Gap, one of the key points I made was that courts need to rethink how they deliver justice — and what it even means to deliver justice.

Just as the Utah Courts said in explaining the thinking behind this pilot, ODR is an effective way of bringing the courthouse to the litigants, making it easier for them to engage with the system and therefore more likely that they will engage with the system. It also reduces the strain on court budgets, staffs and dockets caused by the explosion of pro se litigants. We’ll be watching this pilot to see how it turns out.