Daniel Lewis was just in his second year at Stanford Law School when he had an idea for a different way to do legal research, as I recounted in this 2014 ABA Journal article. His idea was to display search results visually, along a cluster map that shows the relationships among cases and their relative importance to each other. Shortly after he graduated in 2012, he and classmate Nicholas Reed had launched the legal research platform derived from his idea, Ravel Law. Last June, five years after its founding, Ravel was acquired by legal research giant LexisNexis.

By that time, Ravel had also developed a suite of analytics that included court analytics, judge analytics and case analytics. At the time of the acquisition, Jeff Pfeifer, VP of product management for LexisNexis, told me that the acquisition — which followed the acquisition of another legal analytics company, Lex Machina — was part of the company’s broader vision “to create the data-driven lawyer of the future.”

From the outset, the plan was to integrate Ravel’s data visualization technology and data analytics into Lexis Advance and other Lexis products, and to bring those integrations to market starting within the first quarter of 2018.

They are, it seems, right on schedule. At Legalweek in New York this week, I met with Pfeifer and Lewis and saw a preview of the integration of Ravel’s visualization technology into Lexis Advance. The integration is scheduled to be released early in March, said Pfeifer, who reaffirmed the company’s commitment to enabling “data-driven law.”

The two images that follow are a preview of this integration.

In the first image, you see what will be the default view after a user conducts a search. This looks much like it would look today, but with one notable change. The circle to the right of each result is what Pfeifer jokingly called the “Shepard’s donut.” It uses the colors of Shepard’s signal indicators to give the user a quick visual overview of how the case has been treated in subsequent citations. 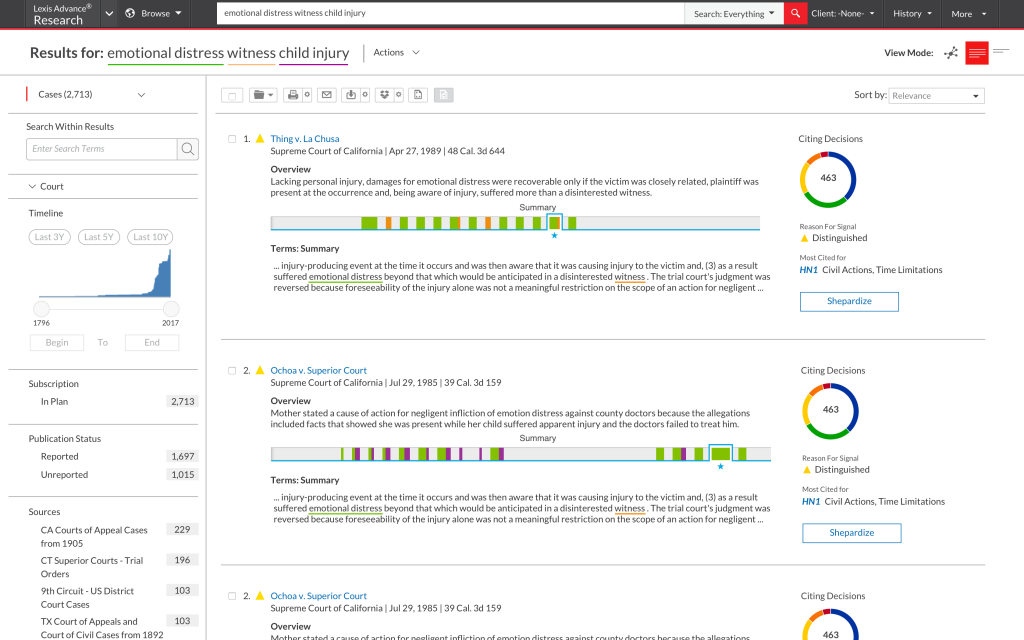 By clicking View Mode in the upper right corner of the screen, the user can switch over to the search visualization mode based on the Ravel integration. This will look familiar to anyone who has ever seen Ravel. It uses the same cluster map of larger and smaller bubbles showing connections among cases and relative importance of cases, all arranged along a timeline. 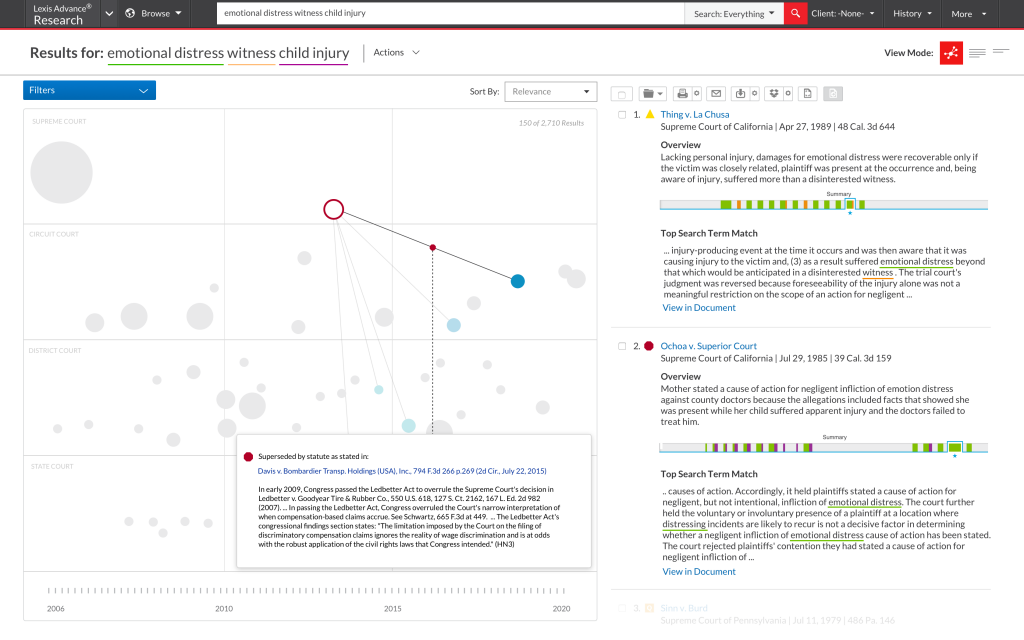 One notable addition to the visualization is Shepard’s citation data. Now, the lines connecting cases include a colored dot, with the dot reflecting the Shepard’s signal indicator. Click on the dot to bring up a selection of text from the citing case that shows the basis for the Shepard’s treatment.

As I said, the visualization will become available in Lexis Advance in March. In a second phase, scheduled for May, Ravel’s analytics tools will be incorporated into Lexis Advance. This will allow Ravel’s court, judge and case analytics to be used within Advance, and will extend the reach of those analytics to a broader selection of state, as well as federal, trial courts.

The May release will also use Ravel’s analytics to provide a greater depth of information about expert witnesses.  expand the analytics to include expert witnesses. A current product, LexisNexis Litigation Profile Suite, will be replaced by an updated product with a new name — as yet to be decided — that marries Ravel’s analytics with the existing profiles to provide more information on experts, such as how often they have been challenged, how often they testify, and more. The new Profile Suite product will also have more in-depth analytics on parties, judges and neutrals.

(Profile Suite will continue to be available for current customers who prefer not to move to the new product, Pfeifer said.)

Before its acquisition by LexisNexis, Ravel had embarked on a project with Harvard Law School to digitize all U.S. case law. As I reported at the time of the acquisition, both Harvard and LexisNexis committed to completing that project, carried out under the auspices of the Harvard Library Innovation Lab.

The scanning of all those cases wrapped up nearly a year ago, but the final clean-up and digitization was just completed, Pfeifer and Lewis told me. Those cases have now been added to the Lexis Advance database. The total collection from Harvard was 5-7 million documents, and a “few hundred thousand” of them were cases not previously included in Lexis, Pfeifer said. That brought the number of case documents in Lexis Advance from 13.5 million to nearly 14 million.

In addition, later this year, Lexis Advance will be adding PDFs of all the cases from the Harvard collection. These include cases from before the American Revolution up to 2016.

Part of the agreement between Ravel and Harvard was that access to these cases would remain free to everyone. After the acquisition, LexisNexis and Harvard confirmed that commitment. Pfeifer and Lewis said this week that the Ravel website will be maintained as the primary site for the public to access those cases.