After 11 years as managing editor of Above the Law, the blog he founded and helped develop into a successful and influential legal publishing enterprise, David Lat is stepping down from his leadership role to spend more time writing, reporting, and parenting his new baby boy. Longtime Above the Law writer and editor Elie Mystal will take over the editorial reins as executive editor.

Lat announced the changing of the guard in a post yesterday, writing that the site is thriving in both traffic and revenue and that “times of success, as opposed to crisis, are the best times for transition.”

Elie and my other wonderful co-editors — Staci Zaretsky, Joe Patrice, and Kathryn Rubino — will preserve the special qualities that have made Above the Law one of the most widely read and influential legal websites in the world, while at the same time taking the site in new and exciting directions.

Lat will take on the role of editor at large at Above the Law. He will work on long-form pieces, features, profiles and other stories, building on the knowledge and connections he has developed within the legal community. He will also work on business-side projects, including pitches and custom content. 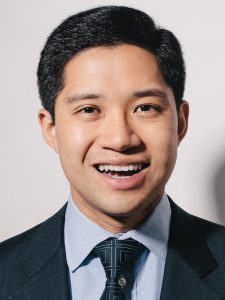 The announcement follows the birth last week of Lat’s and his husband’s first child, a birth he wrote about in Esquire magazine. His first order of business will be a break for parenting leave, and then ease into a more relaxed schedule that will allow him more time with his family.

For someone who made his name blogging, Lat’s career started out on as traditional a track as possible. A graduate of Harvard College and Yale Law School — where he was vice president of the Federalist Society and a member of the Yale Law Journal — Lat did a clerkship for 9th U.S. Circuit Court of Appeals Judge Diarmuid O’Scannlain and then worked at the Manhattan firm Wachtell Lipton Rosen & Katz for a time before leaving to become an assistant U.S. attorney in New Jersey under then U.S. Attorney Chris Christie.

While there, Lat in 2004 anonymously started a gossipy blog about the federal judiciary, Underneath Their Robes, that quickly grew immensely popular. A year later, he revealed his identity in an interview with Jeffrey Toobin for The New Yorker magazine. Not long afterwards, in August 2006, he founded Above the Law.

Lat’s successor Mystal has written full-time for the blog since 2008, when he won a reader-judged contest to select a new editor. A graduate of Harvard University and Harvard Law School, he was formerly a litigator at Debevoise & Plimpton. He also serves as legal editor for the podcast, Radiolab Presents: More Perfect.

[Disclosure: I am a contributor to Above the Law and the blog’s parent company, Breaking Media, sells advertising on this blog.]