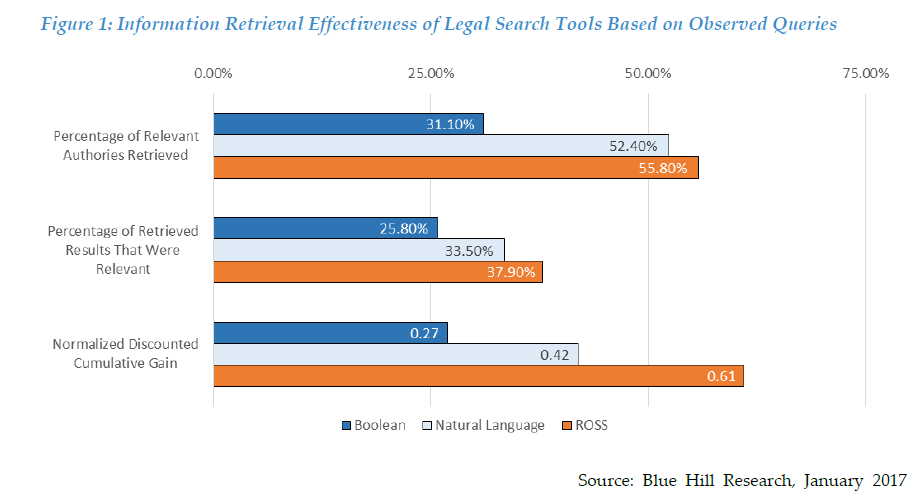 ROSS Intelligence, the artificial intelligence legal research platform, outperforms Westlaw and LexisNexis in finding relevant authorities, in user satisfaction and confidence, and in research efficiency, and is virtually certain to deliver a positive return on investment.

These are among the findings of benchmark report being released today by the technology research and advisory company Blue Hill Research pitting ROSS against the two dominant legal research services. The full report will be available for download at the ROSS Intelligence website.

The study, which ROSS commissioned, assigned a panel of 16 experienced legal research professionals to research seven questions modeling real-world issues in federal bankruptcy law. Researchers were divided into four groups, with each group constrained to perform the research using a particular method:

Of the Boolean and natural language search tools, researchers were assigned a mixture of Westlaw and LexisNexis tools. In addition, members of each research group were limited to individuals with no prior experience with the assigned tool and relatively minimal experience with bankruptcy law.

The study concluded that ROSS generated better search results across all three benchmarks. “These findings indicate clear advantages resulting from the addition of the ROSS tool to electronic legal research involving traditional tools,” the report concludes.

To benchmark the quality of information retrieval using the different research methods, Blue Hill compared their performance in three categories:

The chart at the top of this post shows the results. “On every measure, ROSS outperformed the traditional tools evaluated,” the report says.

When they completed their assignments, the researchers took a user satisfaction survey. This chart shows their responses.

The report summarizes it this way:

[T]he survey results summarized in Table 2 reveal strong indicators of user satisfaction of the participants using a ROSS-supported toolset with respect to the usability, presentation of search results, and inclusion of relevant authorities within the search results. Participants within these groups also indicated high levels of confidence in the ability of the tool to identify all authorities relevant to the matter. In nearly all cases, the responses indicated by participants using ROSS and another tool often exceeded those of organizations using only Boolean search or only Natural Language search by at least a full point.

The report further finds that there is a correlation between the effectiveness of the research tool and user perceptions. “Anecdotal responses … suggest that the ROSS tool’s higher concentration of relevant authorities among initial search result positions played a role with the higher satisfaction with the ease of use and confidence,” the report says.

Based on these findings, Blue Hill went on to quantify how the research efficiency it found using ROSS would impact the bottom line for law firms and legal organizations. To do this, it compared the net gain that ROSS provides against the cost of acquiring it.

That translates to a return on investment of anywhere from a low of 10.5 percent to a high of nearly 2,500 percent, again depending on the extent of the conversion. From the report:

Notably, using Blue Hill’s estimated billable rate of $320, a positive ROI is obtained at a 10% conversion rate, meaning that the investment drives a net gain to the firm with a minimal recovery of written-off hours. Similarly, a 176.4% to 544.5% ROI becomes possible with at least 25% conversion. Where exactly an organization will fall within these ranges will depend on a variety of factors related to its business, investment costs, and the scope of use adopted. In all cases, however, Blue Hill’s model strongly suggests positive business gain is available from the investment in ROSS.

Takeaways from Blue Hill and Me

The benchmarking report provides this conclusion:

Blue Hill finds that the ROSS tool provides significant, additive contributions to the effectiveness of legal researchers. … These results have the potential to unlock new gains in the efficient and profitable operation of legal organizations, as well as create opportunities for new revenue gain.

It also provides this caveat:

It should be noted that none of these findings indicate that AI-assisted legal research constitutes a dramatic transformation in the use of technology by legal organizations. Rather, the use cases and impact reviewed indicate that tools like ROSS Intelligence more closely represent a significant iteration in the continuing evolution of legal research tools that began with the launch of digital databases of authorities and have continued through developments in search technologies.

I would add some caveats of my own about this study:

All of that said, the significance of this report is major. Even as AI tools continue to make inroads in various segments of the legal profession, there remain many who question their real effectiveness and value and there has been a lack of evidence to assuage those questioners.

No doubt there will be other studies and other benchmarking reports of AI in the legal profession. But this study provides tangible evidence that AI not only works but, when used in conjunction with established research tools, can deliver measurably better results and measurable ROI.