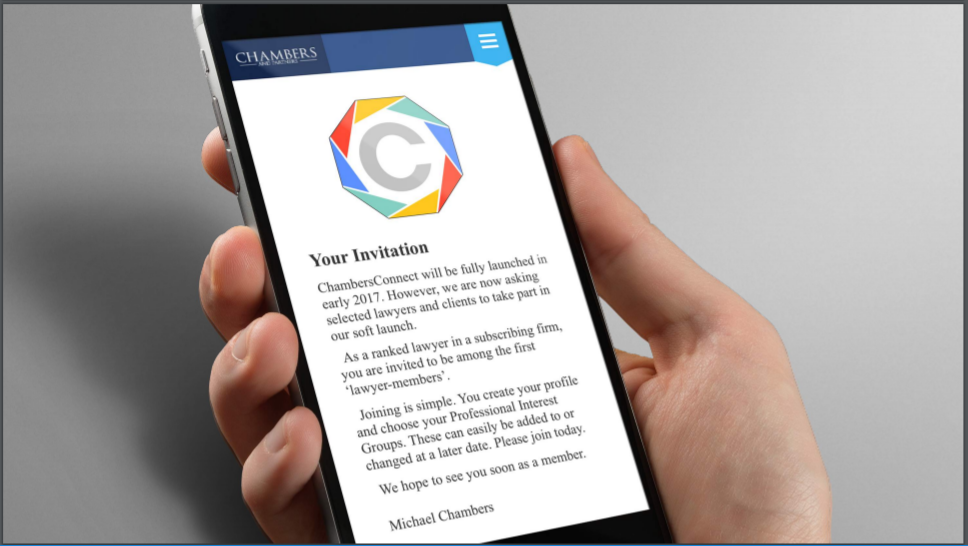 The company whose directories rank lawyers and law firms internationally is now launching its own social network, where membership will be by invitation only and restricted to lawyers ranked in its directories and their clients.

Chambers and Partners will formally launch its ChambersConnect in early 2017, but selected lawyers and clients are about to be invited to take part in the network’s soft launch. A brochure advertising the new network says:

For over 25 years we’ve researched the world’s leading lawyers and ranked them in the Chambers guides.

Now you get to know these lawyers, talk to them, put questions to them, read their posts and legal articles.

The network will provide client members with personalized lists of ranked lawyers based on the professional interest groups that they select.

No more searching through all the Chambers Guides to find the lists that relate to your interests. They’re all here in one place.

Members will be able to subscribe to news feeds based on areas of law, industry sectors and locations. Feeds will also include all activities from a member’s contacts.

All members will have profiles in the style of LinkedIn and will be able to send each other connection requests and private messages.

Lloyd Pearson, a UK-based legal directories consultant, notes on his blog that Chambers will have a tough task in making this a success. “The social network for lawyers space is littered with corpses,” he writes, citing back to my 2014 blog post, one of many in which I’ve discussed the difficulty of launching a lawyers network.

At the same time, Pearson cautions against dismissing this effort. “Chambers has a tremendous brand and has spent nearly 30 years building connections between in-house and out-house lawyers.”

Other networks, of course, have tried to create “walled gardens” for connecting in-house lawyers and their outside firms. The most recent is In The House, which I wrote about last May, and one of the first was Legal OnRamp, which launched in 2007 but eventually evolved into a technology company and was acquired earlier this year by Elevate Services.

There is a lot we do not yet know about ChambersConnect, including whether membership will require a fee. We will watch with interest as it evolves.