Reflective of the bone-chilling outdoor temperatures in New York last week, the air inside the annual LegalTech conference seemed a bit cooler than in years past. I say that with reference to products, not to the conference itself. Whereas LegalTech some years is characterized by a bevy of new product launches or major upgrades, many companies this year had no major announcements. Of those that did make announcements, they were generally of more-minor upgrades to existing products or of upgrades to come later this year.

Let me be clear that the conference, itself, was as energy filled and program packed as ever. Henry Dicker, the ALM executive in charge of LegalTech, has been running it since 1999. It is an understatement to say that he knows how to put on a conference. From the keynotes to the programs to the exhibit hall, LegalTech 2015 was a superb technology conference.

This year, Dicker and his crew did a couple of things out of the ordinary that particularly deserve mention. In a first this year, LegalTech partnered with CodeX, The Stanford Center for Legal Informatics, to provide free exhibit hall space to legal-tech start-ups that have come about with assistance from CodeX. A special section of the exhibit hall was set aside for this purpose and seven start-ups were on display there. In addition, the companies were given opportunities to makes presentations in special CodeX sessions.

For more on this, see Jean O’Grady’s post, A Walk Down the CodeX Stanford “Innovators Aisle” at ALM Legal Tech. 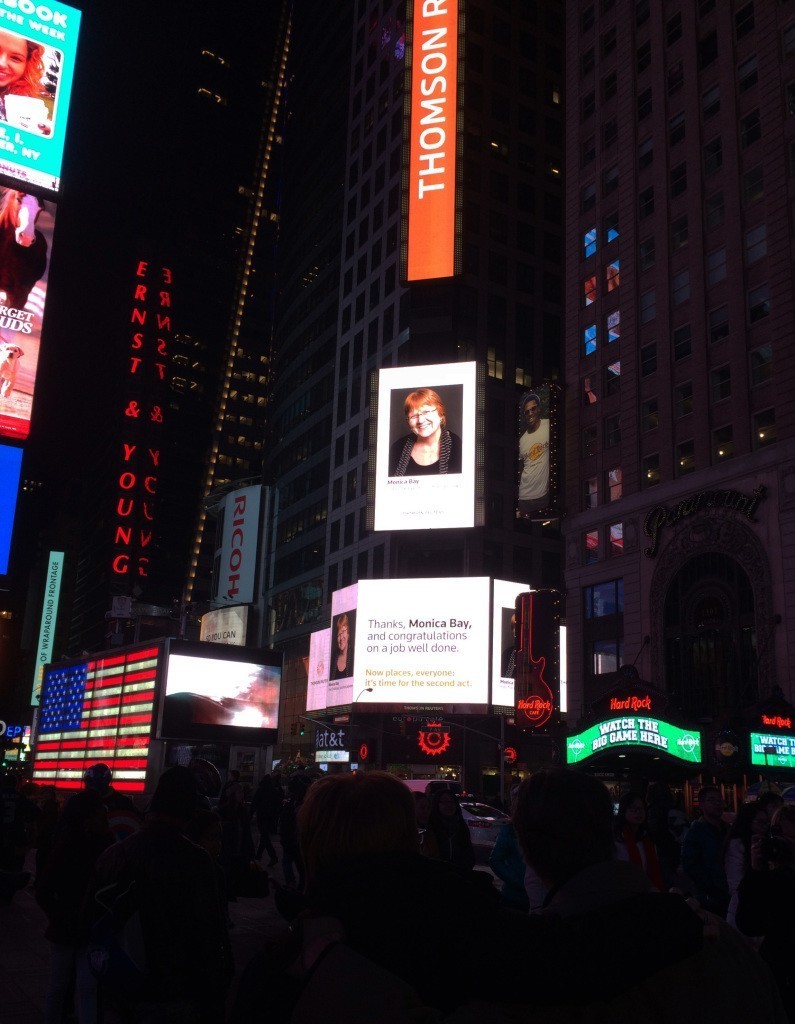 Thomson Reuters honored Monica Bay with her name in lights in Times Square.

The second out-of-the-ordinary event was the first-ever LegalTech rock concert. The concert was sponsored by Catalyst (for which I am a paid consultant), along with co-sponsors ALM, Brainspace, Ricoh, DSicovery and MarkLogic. But Dicker and the LegalTech staff were instrumental in enabling it to take place on premises at the Hilton, the conference venue, and in helping to promote and manage it.

More importantly, this concert became the main event honoring Monica Bay, who officially retires today after 17 years as editor-in-chief of Law Technology News and 30 years with ALM. (See my earlier post about Monica’s retirement.) A line-up of speakers rose to pay tribute to Monica (myself included), after which Judith Flournoy, CIO at Kelley Drye & Warren, and Donna Payne, founder and CEO of the Payne Group, rose to announce the establishment of an annual ILTA award in Monica’s name. In keeping with Monica’s love of the Yankees, a contribution was made to the Derek Jeter Foundation, and in keeping with Monica’s strict editing rules, she was given a bracelet bearing a reminder of her most-frequently repeated admonition, “no solutions.”

Other events honored Monica as well. ALM hosted a reception where it both bid farewell to Monica and announced her successor. With Monica’s departure, Law Technology News is being rebranded with the name Legaltech news (and for both the conference and the publication, the “t” in Legaltech is being changed to lowercase). Named editor of the new publication is Erin Harrison, who was formerly associate publisher and editor-in-chief of InsideCounsel, which ALM acquired last month.

In the most spectacular tribute to Monica, the folks at Thomson Reuters arranged for her name in lights along the outside of the company’s 32-story headquarters at 3 Times Square. I was fortunate enough to be present as Monica was led to Times Square last Sunday evening for the grand surprise.

Back over at LegalTech, curmudgeonly blogger Scott Greenfield was channeling Geraldo Rivera, playing investigate reporter sniffing out the best swag, followed by producer Lee Pacchia and his video crew from Mimesis Law TV. I’ve embedded his video below. Watch carefully while Scott gets his shoes shined and you may notice me in the background. Also in the background on a number of the shots is Andrea Cannavina of LegalTypist.

Glaringly omitted from this LegalTech recap so far is any discussion of specific products or announcements. I will get to them — at least some of them — in the days to come. Meanwhile, it’s already time to start thinking ahead to the next big legal tech conference, ABA Techshow, April 16-18 in Chicago. Hope to see you there.