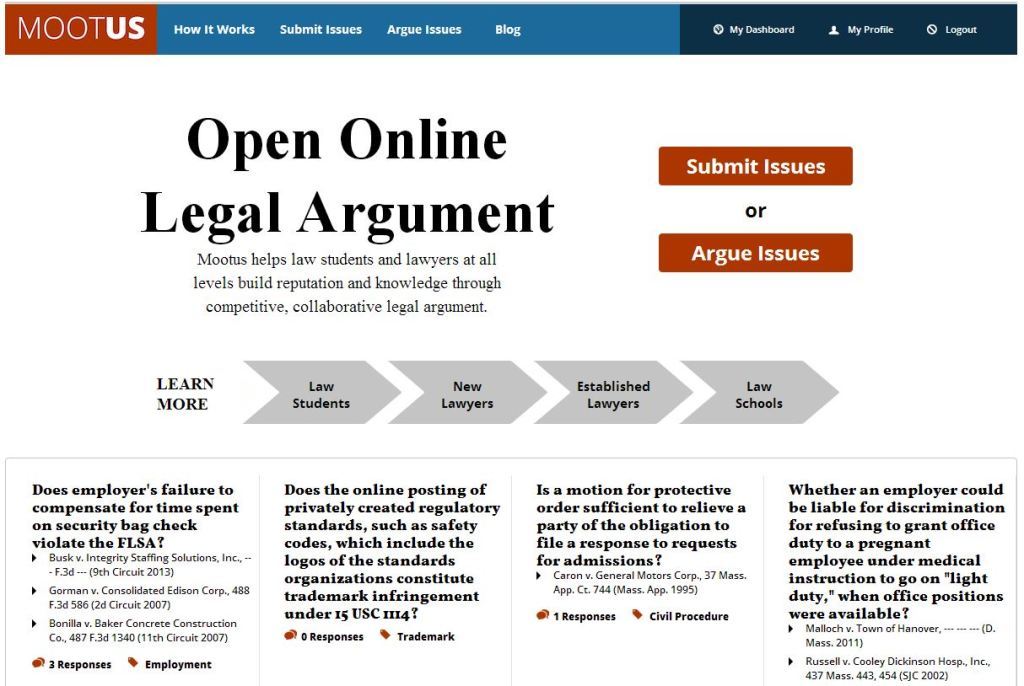 Legal research is often a solitary pursuit, with lawyers hunched over their computers or law books in absolute silence, sometimes with looks of panic or confusion on their faces. But in an age of infinite connectivity, why can’t it be more collaborative, even for lawyers who are on their own as solos or in small firms?

Increasingly, legal research sites are seeking to do exactly this — to promote a more collaborative, crowdsourced approach to legal research. Recently, for example, I wrote about the caselaw site Casetext, which provides access to court opinions together with a platform for crowdsourcing references and annotations.

Mootus is another site that uses crowdsourcing for legal research, but it takes a much different approach. It describes itself not as a legal research site, but as a platform for “open online legal argument” designed for both law students and practicing lawyers.

The idea of Mootus is simple. A user posts a legal issue to be “argued.” Other users respond by posting cases they they believe are relevant to to the issue, together with their arguments for why a case applies. Still other users can then comment on a posted case and vote on whether a case is “On Point” or “Off Base.”

For example, one recent issue asks, “Do mobile phone users have a reasonable expectation of privacy in the geolocation data transmitted by their phones?” Eleven cases have been posted in response, with the most highly rated being In re Application, 849 F.Supp.2d 526 (D.Md. 2011), which the poster described this way: “Rejecting search warrant application and holding that an individual has a reasonable expectation of privacy in his/her location and movements and thus in geolocation data.”

Make a Game of It

Of course, all work an no play makes lawyers a dull group, so Mootus includes a “game” aspect, perhaps as an incentive to encourage greater participation. Users can earn points based on the frequency, speed and quality of their answers.  By earning points, users gain “status and influence” within Mootus.

That’s a good thing, I suppose, if you happen to be a law student positioning yourself for future opportunities, or even a lawyer looking to enhance your own reputation.

By default, everything you post in Mootus is anonymous. When you first sign up, you are asked to create a profile, but your profile and stats remains private unless you set them to public. All the issues you follow or post to are added to your personal “portfolio” that you can also keep private or opt to share.

Mootus is a Boston-based company founded last year by Adam Ziegler and Jeff Schneller. Schneller is the computer geek behind the site, while Ziegler is a lawyer who formerly worked as a partner with a litigation boutique and as an associate at Covington & Burling and Goodwin Procter.

“The ideas for Mootus grew directly out of his obsession with doing high quality legal work as efficiently as possible and his frustration with the outdated tools and conventional methods that lawyers have long been forced to use,” Ziegler’s bio says.

How it Makes Money

The inevitable question is, “So how does Mootus make money?” Pretty much everything I have described so far is free. However, there are two ways Mootus charges fees.

The first pertains to submitting an issue to be argued. For no cost, users can “suggest” an issue and Mootus will decide whether to post it. If you want to be certain that your issue will be posted, then you can pay $100 to have it appear.

The second is to purchase a “premium” subscription for $10 a month. This gives you access to the full archive of Mootus issues, allows you build a more advanced personal library of issues and posts, and enables you to monitor issues that matter to you.