Which law firm was first to have a website? I asked this in my recent Legal Internet Trivia Challenge. Congratulations to Edward Granger of Marketing on Trial for providing the correct answer.

So which firm was it? (Drum roll.) The first law firm to have a website was Venable, or, as it was then known, Venable, Baetjer, Howard & Civiletti. It launched its site in March 1994.

With respect to Venable, my first source of evidence is myself. In an article I wrote in August 1995, I said, “The first law firm to establish a Web page, in 1994, was Venable, Baetjer, Howard & Civiletti. This page set the standard for others to follow.” I was following this stuff pretty closely back then and the world of lawyers on the Internet was still tiny. 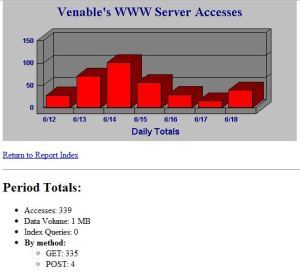 The second piece of evidence is that Venable registered its domain name on March 5, 1994, and a search of the Internet Archive was able to find Venable’s traffic logs back to June 12, 1994. (See image right.)

The best evidence, however, is an April 2, 1994, news article in The Baltimore Sun, Lawyers in Cyberspace, about how Venable “recently hung out an electronic shingle as a publisher on the Internet — making articles by its lawyers available worldwide to users of the far-flung network of computer networks.” The article said that the site went online in mid-March 1994 — a week or so after it registered the domain name.

The article goes on to indicate that Venable was the first firm to have such a site:

Venable has long been influential, but now it might just be the best “wired” law firm in the country. Mr. Bass said that as far as he can determine, Venable is the first law firm with direct access to the Internet and the first to publish there under its own name.

Matthew Bromberg, marketing manager of the Lexis Counsel Connect on-line service, said one law firm in San Francisco had posted resumes of its lawyers on the Internet, but not a full-scale publication.

“It’s not nearly as professional or impressive as what Venable has done,” Mr. Bromberg said. “They’ve certainly taken that to an extent I’ve never seen before.”

The “Mr. Bass” the article refers to is Ken Bass, the trailblazing Venable partner who spearheaded the firm’s entry into cyberspace. To illustrate how uncharted was this territory, you need only read on in the article:

Venable’s electronic periodicals, carried on the World Wide Web segment of the Internet, are sophisticated works of programming. They incorporate graphics and headlines as well as plain text. If you click on a highlighted reference, the program takes you to a related article or document, which could either be in the Venable file or some other data base, through a “hypertext” link.

For instance, when you contact the World Wide Web through the Cello program, you can click on a highlighted reference to Harris vs. Forklift Systems and the program will take you into a data base of Supreme Court decisions at Case Western Reserve University in Cleveland. When you finish reading the justices’ opinions, a click on a return button will take you back to the Venable newsletter.

When HTML mark-up is considered “sophisticated” programming, you know you’ve traveled back in time. As context, consider that the concept of the Web as an Internet service had just been introduced in 1991 and the first photo on the Web was uploaded in 1992. When Venable launched its site in 1994, no one knew quite what to make of the Web or could anticipate what it would become.

One other note of trivia in that Baltimore Sun article is its reference to the “Cello program.” Cello was the first Web browser for Microsoft Windows. Before Cello, browsers were available only for Unix operating systems. Notably, Cello was created specifically with lawyers in mind. It was developed by Tom Bruce of Cornell’s Legal Information Institute so that lawyers — who even then primarily used Windows — could access the Web.

So, unless someone can prove me wrong, I give the title of first law firm to have a website to Venable.