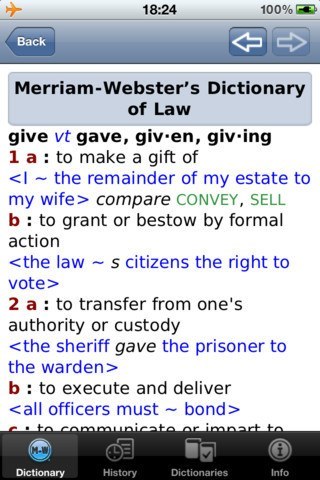 The dictionary on an iPhone.

Mobile versions of Merriam-Webster’s Dictionary of Law were released this week, compatible with either iOS or Android devices. Both include more than 10,000 legal words and phrases, along with information on cases, laws and the legal system. The iOS version can be used with either an iPhone or an iPad.

The apps were developed by Paragon Software Group for Merriam-Webster. Paragon is also developer of the PenReader handwriting recognition software for Android devices, and the Android app comes with a built-in version of PenReader that lets you search for terms by writing them on your screen with your finger or a stylus.

In both versions, you can scroll through a list of words or search for a specific word. Both allow the option of using wildcard search if you are unsure of the word’s spelling. Both also have the option of searching for similar words. As noted above, only the Android version allows you to enter a search using the PenReader feature. The Android version also lets you enter a search by voice or take a picture of text and search using Google Goggles.

Both versions include definitions that are fully hyperlinked. In fact, you can put your finger on any word within a definition and it will jump to the definition of that word or, if it does not have it, a list of suggested words. Both versions also include a search history of your last 100 entries, which you can clear at any time.

In addition to the differences in search described above, the Android version has a couple of other features that the iPhone version does not. For one, it includes audio pronunciations of most (but not all) words. For another, it allows you to change the background color and font sizes.

Neither app requires an Internet connection in order to use it. Once you’ve downloaded the dictionary, you can use it whether or not you are online.

Both apps also come loaded with brief descriptions of historically important cases and important laws, as well as a guide to the judicial system. These may be of interest to non-lawyers but are of no practical use to legal professionals.

I tested both the iOS version on an iPhone and the Android version on a tablet. Overall, both versions are largely comparable, except for the differences I’ve already noted. I noticed that the iPhone version had a larger dictionary. I’m not sure why, but I believe it is because I also have the general Merriam-Webster dictionary installed on my iPhone, and it may be drawing from that dictionary in addition to the legal one.

Merriam-Webster’s Dictionary of Law is available from iTunes for $24.99 and from Google Play for $24.95. That is about half the price of the Black’s Law Dictionary app, which is $54.99 for the iPhone.

Tip: The Kindle version of this same dictionary sells for $9.99. That means that if you have the free Kindle app on your device, you can get the same dictionary for less money, albeit with a different set of features.