For an update on this post, see: Update on iPleading: It’s Been Fixed.

iPleading is billed as an iPhone and iPad app that lets lawyers create “impressive pleadings with astounding ease.” The problem is, it doesn’t work. The developers say a fix is in the works and will be available within the next week or two. For now, however, hold off on buying this app. 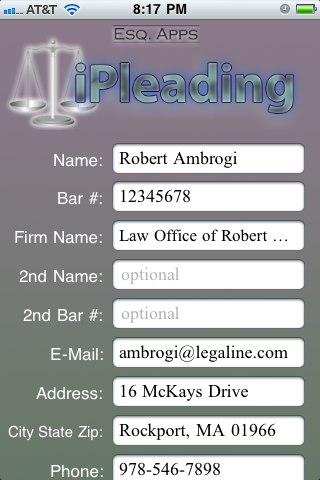 Filling out the iPleading form on my iPhone.

What is supposed to happen is this: Using the app on your iPhone or iPad, you enter your name, bar number, address, phone and fax. You can also enter a second attorney’s name and address. If you like, you can enter the name, county and state of the court in which you’ll file the pleading.

Once you’ve filled out the information, click “Create and Send.” You should then receive an e-mail with two attached documents. The first document is the first page of your pleading, in a fillable PDF format that lets you complete the pleading caption and other introductory information.

The second attachment is a Microsoft Word document formatted in proper pleading form and ready for the attorney to use to draft the remainder of the pleading.

Even if this all worked correctly, I’m not sure that the app — which costs $3.99 — is all that useful. Its developer, a lawyer in Santa Cruz, Calif., sees it as a shortcut for a busy lawyer. iPleading lets a lawyer get a document started from a mobile phone and then, when back in the office, sit down and immediately start to work on its substance. 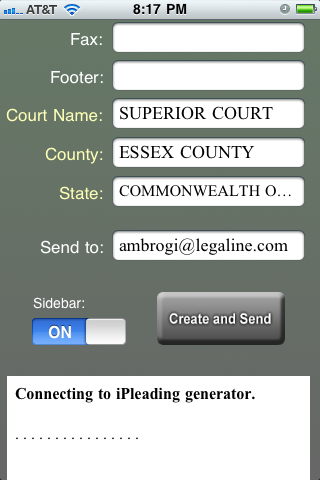 Waiting to connect to the iPleading generator.

But if all iPleading does is set up a template with your name and address, this is something most of us have done already. I’m not sure why I would want to buy an app that does something I can easily do on my own. The developer’s answer is, in part, that Word is not very good at configuring documents in legal format. That may be so, but once you’ve got one document set up, you’re good to go.

Everything I’ve said so far assumes that the app works. The problem is, it doesn’t. I am told that a fix is in the works and will be ready to go soon.

Here is what happened when I installed the app on my iPhone. I filled out the information with my name, address, court, etc., and clicked “Create and Send.” A message appeared saying, “Connecting to iPleading generator.” And then I waited. And waited. The connection was never made and the app appeared to hang. I closed the app, filled out the form again and clicked “Create” again. Same thing happened. I rebooted my iPhone and tried again. Same result.

I e-mailed the app’s developer, who — to his credit — responded within minutes. He looked into at his end and could find nothing. He then sent me an e-mail showing me the attachments I should have received (although done in his name). Strangely, I could not open the PDF file. Adobe told me that I needed a Japanese language addition in order to open it.

This morning, I received an e-mail from a programmer for iPleading. Here is what he said:

We have just discovered thanks to your email that the version on the app store has stopped working. This was a surprise after months of solid performance.

We have a working version ready to upload, BUT We are also right in the midst of a name change with Apple, and may not be able to upload the fix for up to 5 days!

Additionally, since Apple must approve the update after we upload it, we anticipate a few more days delay after the update is in Apple’s hands. We are sorry for the inconvenience. Let us know if you have any questions in the mean time.

Thus, the bottom line is that this app is not presently working. Based on the programmer’s e-mail, it appears it will be at least a week, maybe longer, before it is fixed.

I will try it again then. In the meantime, if you were considering a purchase of this app, you should hold off until it is fixed.