The chief justice of the California Supreme Court, Tani Gorre Cantil-Sakauye, said that the state legislature is to blame for stalling efforts to bring about regulatory reforms to address the state’s gap in access to justice.

Cantil-Sakauye was the keynote speaker last week at the annual meeting of the American Association of Law Libraries. During a question-and-answer session following her speech, I asked her about the stalled efforts to bring about reform in California and what the Supreme Court could do to move the issue forward, particularly in light of the leading roles taken by the supreme courts of Arizona and Utah to bring about reforms in those states.

Two working groups in California have been studying potential reforms, with one examining creation of a regulatory sandbox program similar to Utah’s, and the other having recommended that specially trained paraprofessionals be allowed to provide limited legal services.

But the California Senate has effectively shut down those working groups with a bill (AB-2958), which is still pending, that would prevent any California State Bar committee from recommending any changes to the rules that only lawyers can own legal practices or deliver legal services. 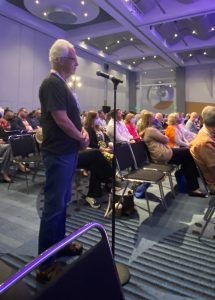 Listening as the chief justice answers my question.

Cantil-Sakauye (pictured above, right, with AALL immediate Past President Diane Rodriguez) said that the Supreme Court is blocked from independently taking action on these reforms by two factors unique to California. One is that the state bar is an independent corporation with its own board of trustees. The other is that the state legislature is empowered to set the dues each year that attorneys must pay to maintain their admission to the bar, and, in so doing, to attach riders and conditions to what the bar can and cannot do.

In addition, she said, every year lawyers lobby the legislature for items to be included in or excluded from the dues bill, as was the case with the restrictions the Senate added this year.

“We, the Supreme Court, had already authorized the state bar to study the sandbox and the paraprofessional group,” Cantil-Sakauye  said. “We pointed to Arizona, we pointed to Utah, we pointed to Washington, and we pointed to Michigan and its efforts, and we have a program to offer.

“But the legislature has just now, at least written in statute, the inability to proceed with that. And that bill was lobbied by the lawyer groups in California, who went to the legislature and want this to slow down because of their concern.”

Cantil-Sakauye added that she does not believe the reform efforts will be completely blocked, but that many want to wait and see how the reforms in Arizona and Utah turn out. Reform efforts in California will eventually succeed, she believes, “because there are so many benefits to fill the justice gap using paraprofessionals and the sandbox.”

“But right now in California, with our legislature, they have put — they’ve slowed it down, and because it’s a corporation, we, as the Supreme Court, do not even get proposals from the state bar until their board of trustees votes to send it to the Supreme Court.

“So we’re in a different administrative structure that has caused a dismay. It’s also been helpful in some respects, but it’s caused dismay and concern over these two programs that could eliminate the justice gap.”