Aiming to raise awareness and understanding of the legal and regulatory issues related to blockchain, several legal professionals, legal service providers, academics, technologists and business executives have come together to form the Blockchain + Legal Industry Group, and today the group is releasing the first in a planned series of white papers produced to share the group’s knowledge and insights. 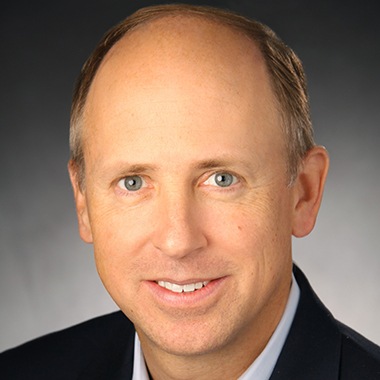 “When a new technology presents itself, we work with corporate legal departments to help them be sure that when the technology gets implemented, they do it in a way that meets their legal requirements, whether it’s discovery, preservation or information governance,” Roger Pilc, president and general manager, Global Legal Solutions, at Epiq, told me during a recent interview.

Read more about Epiq in the LawNext Legal Technology Directory.

As it had done with previous emerging technologies, and as blockchain gained greater adoption, Epiq wanted to help ensure that corporate counsel, law firms, and others it works with fully understood the legal implications.

The group soon began to expand, Pilc said, as more law firms started to join, because their clients were asking about cryptocurrency and blockchain, and then more technology companies joined, because their customers were asking questions about the legal and regulatory issues.

Now the group is going public, both in order to broaden the reach of its educational efforts around blockchain and cryptocurrencies, and to broaden the organization’s membership in order to incorporate a greater depth of experience and perspectives.

“We don’t view the knowledge that’s getting created here as proprietary,” Pilc said. “We’re trying to create a body of knowledge that’s useful for each of us in serving our clients and useful for corporations or legal departments that want to better understand the legal and the regulatory and compliance issues that they’ll need to understand, and that their boards will ask them about as they implement the technology.”

Although the group originally approached blockchain from the standpoint of helping corporate legal departments play defense by managing this new technology and mitigating risks, Pilc said, it has expanded its scope to also consider how blockchain technology could be used by corporate legal and compliance departments to do their jobs better and transform how they operate.

“It’s been fascinating to see that there are legal departments and compliance departments that are using blockchain to help implement their regulatory compliance requirements within their supply chains,” Pilc said.

The white paper released this week, Blockchain and Mitigating Corporate Risk, represents at least part of the work product of the group to date, addressing issues of governance, data privacy, and e-discovery related to blockchain and corporate legal departments. Written by Alison Wisniewski, chief legal officer at Epiq, it incorporates both the input of and review by the other members of the group. 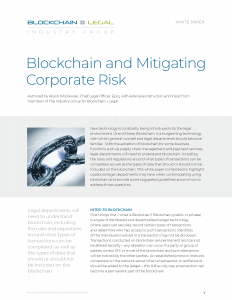 One of the issues Wisniewski addresses in the white paper, she said, is that of blockchain’s implications for e-discovery.

Going forward, the group plans to publish a series of white papers, all intended to encapsulate and share its knowledge on legal and regulatory issues pertaining to blockchain.

The group will also present a series of forums to discuss critical topics around blockchain, with speakers from both within and without the group’s membership. The first will focus on smart contracts and questions around what they are, how they work, and why they are needed.

“We’re trying to give people very real-world knowledge about, okay, here is how you would tackle that,” said Diana Dowling, innovation and strategy consultant at Epiq, who is organizing the forums.

In 2017, a group of legal industry leaders formed the Global Legal Blockchain Consortium – a group that appears to have since disbanded. As I wrote about it at the time, one of its goals was to drive standardization around blockchain within the legal industry.

Establishing standards is not a focus of this new group, Wisniewski said.

“This group was formed more to think through blockchain – what the risks were, what we can use blockchain for in the future – and to be an advisory group to the market as to blockchain,” she said. “The purpose wasn’t really to sit back and develop certain rules and regulations around that, because I think it’s still ever-changing.”

Focusing on sharing knowledge, rather than setting rules, should make the group having more staying power, Wisniewski said.

“I think that’s why this group will be more successful moving forward and have more longevity, because we’re not thinking about creating rules and regulations around the use and governance of blockchain. It’s more, ‘This is what we’ve seen, and this is the advice that we’re giving, because this is our experience.”

With today’s public launch and release of its first whitepaper, the group is welcoming applications from new members. In bringing on new members, Pilc said, he hopes to further build on the 360-degree view the group already has.

“The eclectness of the group – which includes technology vendors, service providers, law firm professionals, financial advisors and others – gives it a 360-degree view of the problem,” he said. “It’s a big benefit to the group to navigate these unchartered waters together before those more formal standards and operating procedures come along.”

“One of the key elements of the group that’s emerged is the fact that everybody comes with a different point of view and a different perspective,” she said. “By getting that landscape, it’s been invaluable. So I think that’s going to be a primary goal is to continue to fill out that landscape, whether we look at different industry verticals or we add on to some of the existing perspectives.”

One recent addition to the group is Stephen Aschettino, who leads the U.S. fintech practice at Norton Rose Fulbright, and who has been following the development of cryptocurrencies since their earliest days.

He sees part of the mission of this organization as helping legal professionals understand how blockchain applies to their practices.

“Chronologically, we’re not in the early stages of blockchain. I think we are in the early stages, though, in terms of educating lawyers and legal departments on its potential uses,” Aschettino said. “Many get distracted by seeing what happens in the crypto world, and they hear about certain use cases in blockchain, but they don’t necessarily see how it applies to them.”

In addition to helping legal professionals understand blockchain, he believes the group’s work is also likely to encompass identifying and addressing the potential risks of blockchain.

“No question that’s going to be part of the process, right, helping to identify what those risks are, developing a solution to them, and then educating to take away whatever hesitation there may be to actually employ blockchain technology, whether it because of the lack of knowledge, because of the knowledge of the risks, or perhaps lack of information about how they can actually leverage that technology,” Aschettino said.

In 2017, when the Global Legal Blockchain Consortium announced its formation, one of the organizers predicted that blockchain, more than any other technology, would drive the next wave of legal innovation and transform the business of law.

Although that did not come to pass, Pilc believes we have now reached a tipping point with regard to blockchain in legal.

“It feels that the degree of adoption in the last 12 months has perhaps hit that tipping point where it’s kind of the exact moment in time to be addressing these legal and compliance and regulatory issues,” he said.

Aschettino of Norton Rose similarly suggests we are on the cusp of wider adoption.

“There are lots of test cases out there, and some will be successful,” he said. “Once that’s exposed, once people see that the blockchain solutions can work, once they see law firms partnering with clients in a way that not only promotes efficiency, but promotes better client service and arguably embeds those law firms with those clients, then I think you might see a big shift.”

With every emerging technology, there is much hype and there are many false starts, leading some to dismiss them as fluff, Aschettino said.

“I don’t think that’s the case here. I think that right now we’re bringing together a group of very serious educated stakeholders to really help the industry as a whole move forward. And I’m optimistic it’s going to be successful.”

That means focusing on the real issues around blockchain, and not the hype, he said.

“I expect that we’re going to take on the hard issues, the challenges, the regulatory struggles that maybe have been holding back some innovation here, and perform some thoughtful analysis, make some recommendations, and perhaps even be involved in some pilot projects.”