It is fitting that Thomson Reuters’ annual survey report on the state of small U.S. law firms, which is being released today, opens with the French phrase, “Plus ça change, plus c’est la même chose” — the more things change, the more they stay the same.

This is the fourth time TR has produced its report on the state of small law firms in the United States, and each has been remarkably consistent in finding that small firms face significant challenges, particularly in acquiring new business, but that relatively few have taken action to address their challenges.

(See below for links to posts on prior years’ surveys.)

But the silver lining is that small firms’ general inaction breeds opportunity for those that make the first move, the report says.

“While it is undoubtedly true that some small law firms have already taken a leading role to innovate their service delivery models,” the report says, “there remains ample fertile ground for other firms to implement similar changes, whether by improving business development acumen, creating optimal internal efficiencies for managing their law firms, or adopting technology to streamline their practice.”

The report is based on a survey conducted during the early days of the coronavirus crisis, March and April 2020. It surveyed 400 respondents at law firms ranging from solo practices to 29 lawyers.

Acknowledging that much has changed from the time the survey was conducted to today’s publication of its findings, the report suggests that it is nonetheless pertinent because “one cannot fully understand where they are today without first understanding where they’ve been.”

In that sense, the authors say, the report provides a foundation for small firms looking to implement strategic and tactical changes to improve their business outlook through the current crisis and beyond.

“COVID is a disruptor and an equalizer at the same time,” said Mark Haddad, general manager, Small Law Firm Segment, at Thomson Reuters, during an interview yesterday. “There will be winners and losers in all aspects of business and law.”

“It is not too late for your firm to be a first mover, we truly believe that,” Haddad said. “This is the time to take advantage of the positive side of that disruption that’s afoot.”

But there is also a very good chance that little has actually changed for small firms from April to now. As already noted, and as I reported here last year of this survey, its findings have remained alarmingly consistent year after year.

If anything, the pandemic is likely to have exacerbated the challenges small firms face. This year, as in prior years, there has been no change in what they cite as their top two challenges: acquiring new client business and spending too much time on administrative tasks to the exclusion of practicing law. 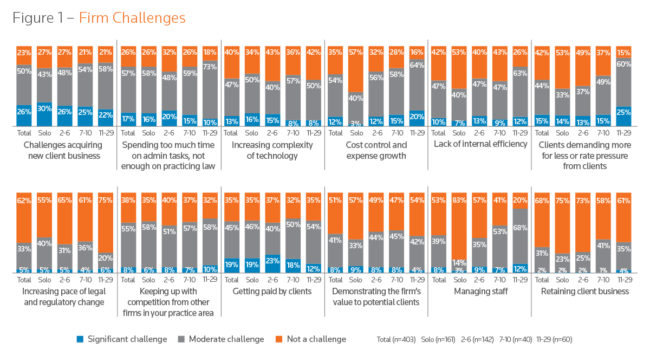 One challenge that is greater this year than in prior years is getting paid by clients. This is particularly true for firms of 10 lawyers or fewer. The report speculates that this could be a reflection of the pandemic’s impact on the legal market, but that it could also be due to firms’ difficulty in demonstrating their value to their clients. 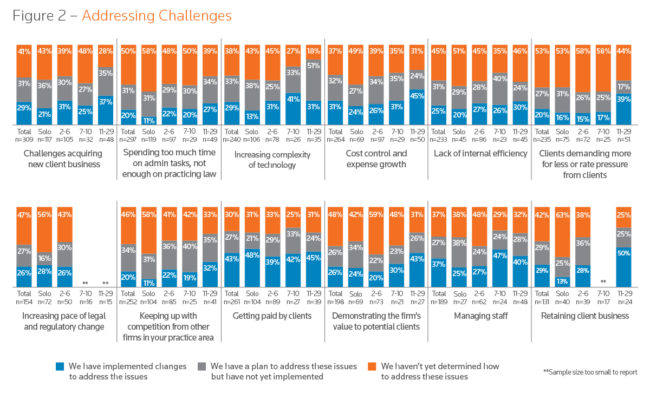 Year after year, the surprising finding of this survey is not that small firms face challenges, but that they do so little to address them. Of firms that cite acquiring new business as a challenge, just 29% have implemented changes to address this challenge. Of firms that say they spend too much time on administrative tasks, just 20% have tried to do anything about it.

Generally speaking, solo lawyers are the least likely to have taken action to address the challenges they face, while firms with larger numbers of lawyers are more likely to have acted. This makes sense, Haddad says, since the smaller the firm, the fewer resources available to it. 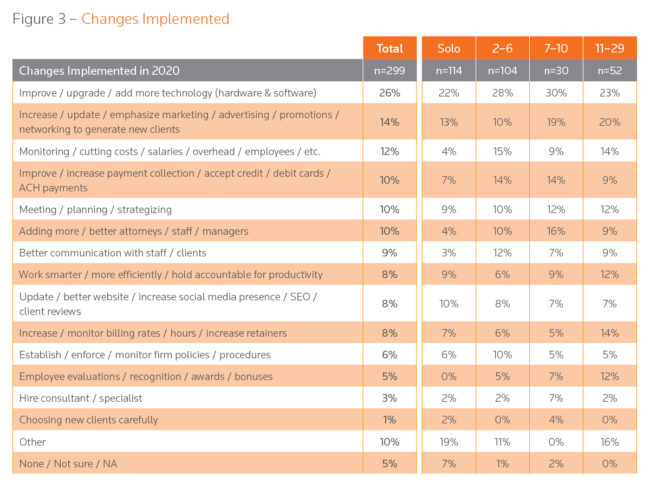 Of the firms that either have taken action or that have plans to, the most-common change they have implemented is to improve or add their technology. Other measures taken by firms to address their challenges include: 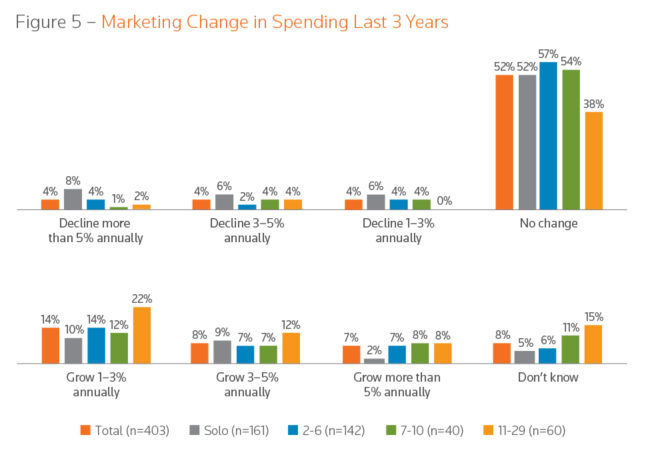 Another surprising finding is that, despite the challenges firms face in acquiring new clients, more than half say they’ve made no change in their marketing spend over the past three years. The one exception is in firms of 11-29 lawyers, where just 38% said they’d not changed their spend and 22% said they had increased their spend.

The numbers were virtually the same when respondents were asked if they plan to increase their marketing spend over the next three years, with half planning no change.

“In the time of the pandemic, consumers will be even more discerning about their spending,” said William Josten, strategic content manager at TR’s Legal Executive Institute. “So focusing on business development is really going to be critical.”

However, that does not have to mean spending more, Josten said. “It’s possible to actually spend less on marketing and do more if you’re doing the right things,” such as a targeted digital strategy. 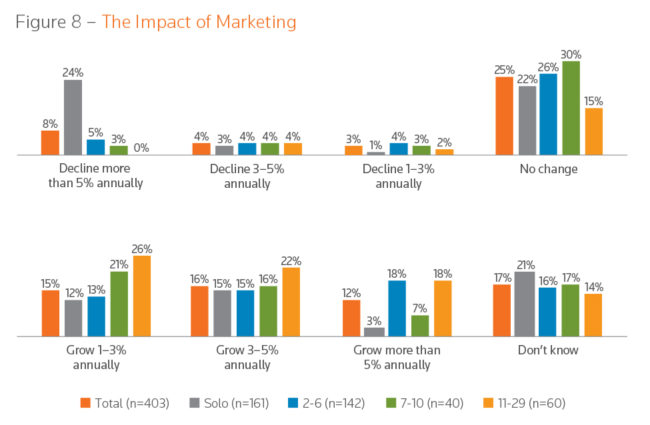 In what may be a troubling portent for solo lawyers, the survey asked firms about changes over the last three years to their client base — the number of clients served by the firm — which the report characterizes as the impact of marketing. While many firms saw increases, solos did not fare as well.

Among solos, 28% saw their client base decline — 24% by more than 5% a year. Another 22% of solos saw no change and — possibly worst of all — 21% did not know whether there had been a change in their client base. 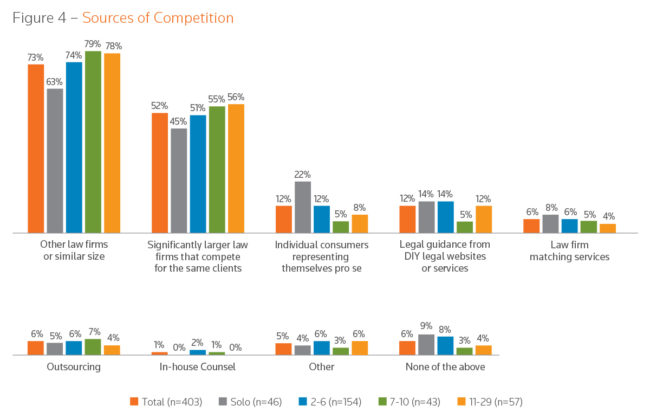 Lawyers spend roughly 60% of their work time practicing law, the survey found, with little variation by size of firm. The rest of their time is spent managing the firm, marketing, meeting or speaking with clients, or dealing with administrative tasks. 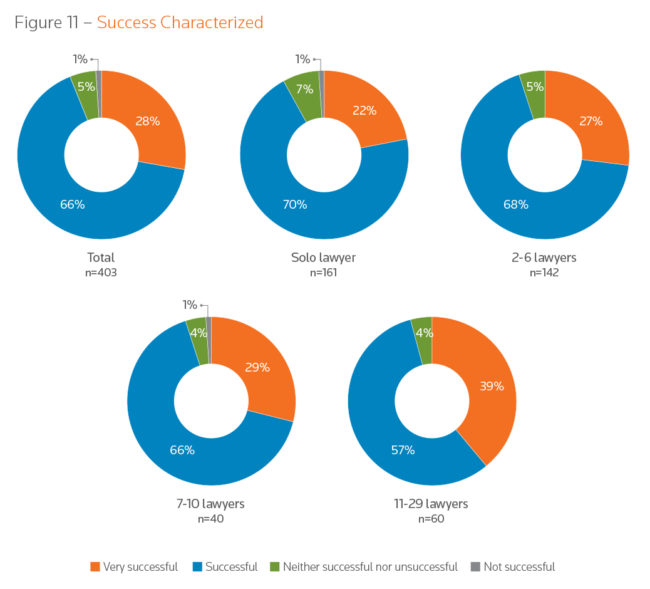 Overall, 94% of respondents characterized their firms as successful or very successful, with little variation among firms of different sizes. 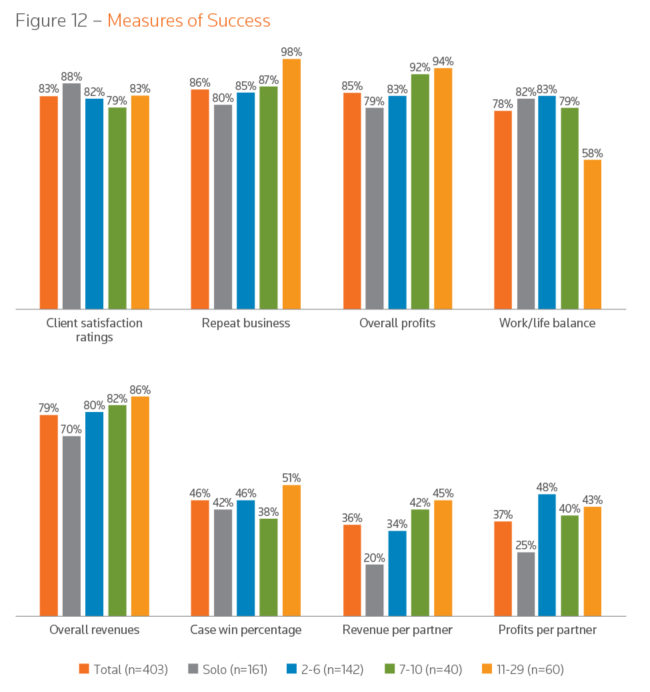 The survey also asked lawyers what they consider to be the measures of success. The most common answers they gave are overall profits, repeat business and client satisfaction rankings. 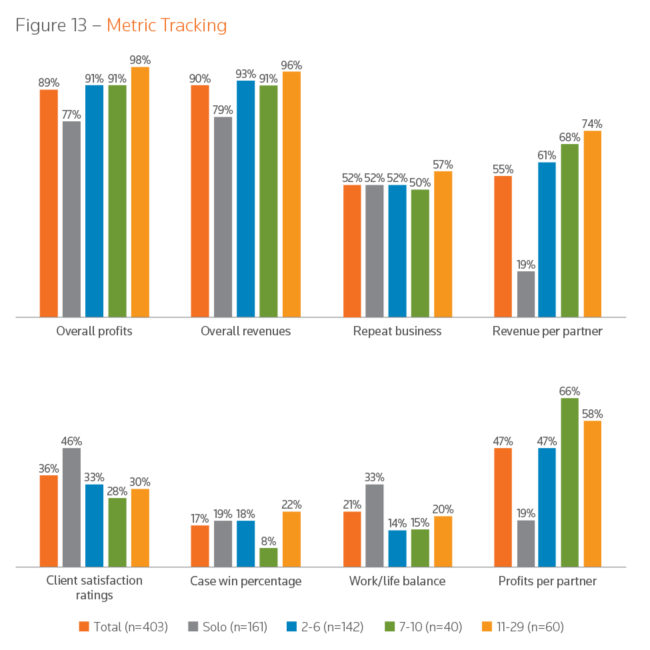 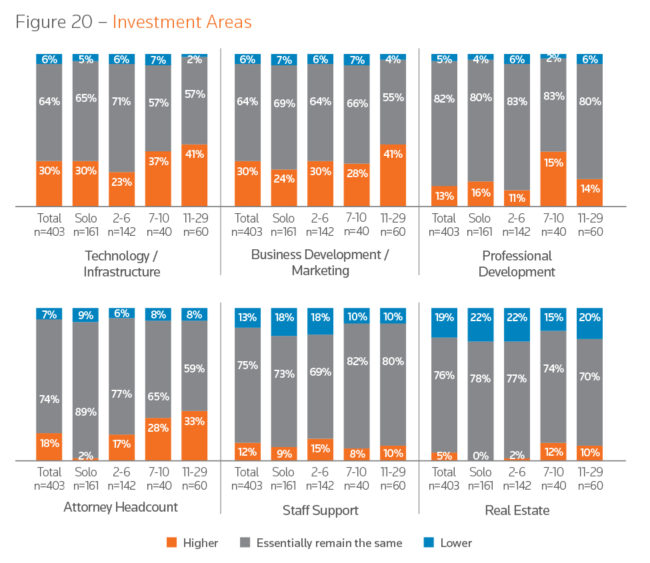 Asked about future investments, 30% of firms said technology and infrastructure was a high priority. roughly the same percentage cited business development and marketing as an investment priority.

Asked what technology systems they plan to implement going forward, 72% said none.

You can download the survey from Thomson Reuters: 2020 State of U.S. Small Law Firms.

This is the fourth year TR conducted this survey of small law firms. To read more about the prior years’ surveys, see: