Editor’s note: When courthouses in Jefferson Parish, La., shut down on March 15 due to the COVID-19 emergency, it presented a unique challenge for drug court probationers who are required to regularly check in on their status and well-being.

A call for help on Twitter, posted by Gabriel Teninbaum, director of Suffolk Law School’s Institute on Law Practice Technology & Innovation, led to an introduction between Tom Martin, founder and CEO of chatbot company LawDroid, and Judge Scott U. Schlegel, chair of the specialty courts in Jefferson Parish. Within weeks, Martin, Schlegel and their teams had developed a text-based chatbot that provided the solution the probationers’ needed. By the way, Martin and his team did this pro bono.

Here is the story of how that happened, as told by Martin (and written April 15). Meanwhile, watch for next Monday’s episode of my LawNext podcast, which will feature an in-depth interview with Judge Schlegel, who has introduced a number of innovations in his courts using commonly available technology products.

So, it all started when Gabriel Teninbaum reached out on Twitter about help with chatbots back on March 22. Naturally, the topic interested me so I responded to Gabe and we DM’ed.

Gabriel defined the challenge like this: “This is a pro bono thing for Jefferson Parish, Louisiana. I’m friendly with a judge there who oversees re-entry and probation. They have roughly 400 high risk folks on probation who can’t easily be seen by probation officers [due to COVID-19]. They want to be able to check in on them — see if they’re doing ok, see if they need services, etc.”

The Specialty Treatment Courts (which include drug offenses, DWI and the like) of Jefferson Parish, Louisiana, are different than most substance abuse courts in the United States, favoring treatment over solely punishment. “The goal of the team is to work cooperatively to ensure offenders the opportunity to become productive members of the community through sober and responsible living: thereby, avoiding incarceration, enhancing public safety and reducing recidivism.”

Gabriel introduced me to Judge Scott Schlegel, Melissa Carter and his team on an introductory Zoom call the next day (March 23) and we were off to the races.

Within 24 hours, I produced an proof of concept that looked like this:

Rather than use a web-based chatbot, the proof of concept reflected automation that was solely SMS/text-based to ensure universal coverage, accessibility and, hopefully, compliance.

Between March 24 and April 5 and over the course of several threads, over a hundred emails, shared spreadsheets, Zoom calls, etc., I communicated with Judge Schlegel and his team.

We defined the scope of the project:

To be honest, the project grew very quickly in terms of technical complexity and the emotional weight/investment of knowing that what I was working on could be critical in helping probationers get through a difficult time.

On Monday, April 6, the campaign launched and texts triggered to all 580 probationers. There were some snags. Not all phone numbers were valid so that through an error that prevented all probationers from receiving the check-in text. The SMS gateway I used also experienced some errors (on the launch date) due to increased overall traffic/usage due to coronavirus communications. This also caused some texts to go out more than once. The spreadsheet we used to track the campaign activity also needed to be updated to include additional data points. Worse, it appeared that “Not Okay” responses were not triggering responses as intended. 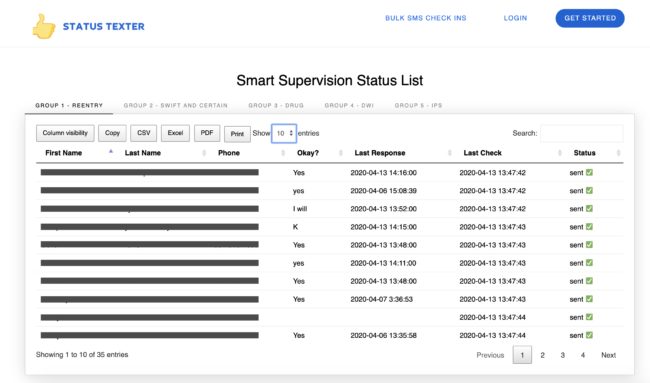 Needless to say, I was frustrated, but chose instead to view myself as a scientist, the launch as an experiment, and the results as opportunities to iterate and improve. Fortunately, I had a supportive partner in Judge Schlegel and his team. Scott provided me with his team’s feedback and his commitment to work with me to get it right.

The next week, I worked with my developer steadily through the issues: error handling (so invalid phone numbers wouldn’t break the system), a kill switch to avoid duplicates, a timer to automate the process, as well as checking and double-checking the syntax to ensure responses were routed correctly.

On Monday, April 13, the campaign launched again and went out to all 580 probationers without a hitch. The spreadsheet updated accurately. “OK” and “Not OK” responses got routed correctly. An invalid number cropped up, but it did not stop the campaign from completing and the invalid number was flagged for correction.

In parallel with these efforts, I put together a website and brand to capture this concept: Status Texter. It is now available for individuals and businesses who want to automate checking in. 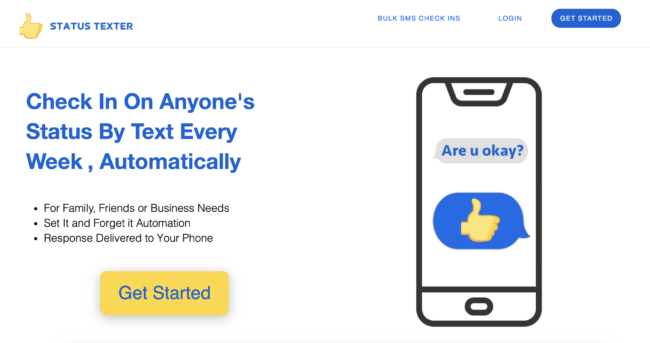 Today, April 15, I just jumped off a Zoom call with Judge Schlegel and Melissa Carter. Melissa reported that the feedback she received was good and that the office was able to follow up with probationers who reported that they were not okay. Mission accomplished.

Judge Schlegel and I will continue the conversation about improving the features, further segmenting the groups, and tailoring the message and timing.

So a total of:

…led to rapid innovation, resulting in a new, digital way for probation officers to check in with their probationers and make sure they’re doing okay.