Thomson Reuters is releasing a new Legislative Insights tool today on Westlaw Edge that uses artificial intelligence to track legislation, predict the likelihood of its passage, and identify the industries it will likely impact.

The tool uses machine learning and natural language processing technology developed by Skopos Labs, a New York-based AI company in which Thomson Reuters is a major investor. The company has developed what it calls Automated Predictive Intelligence that predicts the impacts of policy-making on companies and markets.

The tool combines that technology with the legislative content available in Westlaw Edge with the goal of providing lawyers a better understanding of how proposed legislative changes may affect a client, company, agency or industry. 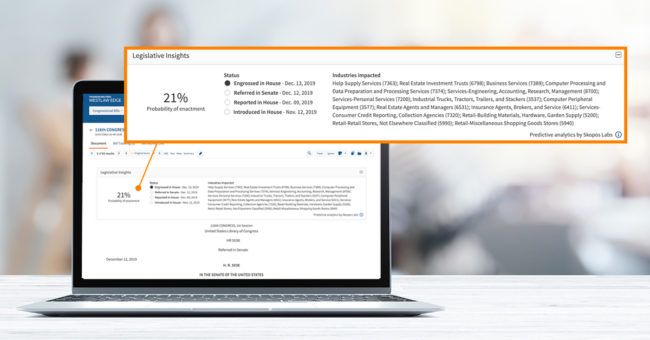 I have not seen a preview of Legislative Insights, but according to Thomson Reuters, it applies more than 250 factors to assign each bill a Probability of Enactment score. In addition, it tags industries that will likely be impacted by the bill if passed. The algorithm weighs multiple factors, including the text of a bill as well as political and external variables.

As an example, Thomson Reuters said, the tool could show that an environmental bill would be more or less likely to pass with the terms “climate change” included compared to a bill where “global warming” is used. Political variables the tool would weigh could range from the composition of Congress to the assigned committee. External factors it incorporates could be related to gross domestic product or natural disasters.

This new Westlaw Edge tool appears to have some similarity to the State Net legislative tracking service owned by LexisNexis. Like Westlaw’s Legislative Insights, State Net includes the Forecast tool, which purports to use AI to forecast the outcome for a bill as it moves through each stage of the legislative process.

State Net also recently added Momentum Analytics, which identifies bills that are moving rapidly or slowly through the legislative process, as I wrote about in December.

To my knowledge, State Net’s Forecast tool does not predict industries affected, as does Legislative Insights.

Thomson Reuters was an early investor in Skopos Labs through Thomson Reuters Ventures, its venture capital group that focuses on growing and mentoring early stage startups.

“Thomson Reuters has been employing AI and machine learning for more than 25 years,” Khalid Al-Kofahi, vice president of research and development for Thomson Reuters and head of its Center for Artificial Intelligence and Cognitive Computing, said in a statement issued by the company.

“We continue to build and enhance AI applications in-house but also partner with companies that can complement our offerings. The capabilities of Skopos Labs are impressive, and we’re excited to bring more AI and machine learning to Westlaw Edge through Legislative Insights.”