The legislative tracking service State Net, which is owned by LexisNexis, is marking its 50th year in business by rolling out upgrades to its infrastructure and search and new analytics.

Founded 50 years ago in Sacramento, Calif., State Net was acquired by LexisNexis in 2010. Two years ago, LexisNexis put Daniel Lewis, vice president of product, in charge of the product. Lewis is the cofounder and CEO of Ravel Law, a legal research service known for its visualization and analytics tools, which LexisNexis acquired in 2017.

During a preview of the new features on Monday, Lewis acknowledged that legislative research differs from legal research in many respects. Nonetheless, he and his team have endeavored to bring to State Net similar visualization and analytics tools as he helped develop at Ravel Law.

Changes to State Net being announced today include:

During the preview, Lewis demonstrated the new “one-stop” overview page for legislation. (See the image at the top of this post.) It provides an overview of the bill’s sponsors and status as well as a view of State Net’s proprietary Forecast feature that predicts the likely outcome at the next stage of the legislative process. 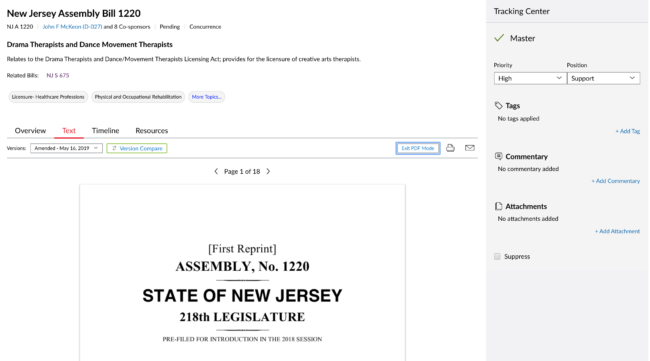 From the overview, a user can click on the Text tab to view the text of the bill. This view now includes a link to the affected section of the statutory code, so that a user can easily see the statute that the bill would revise. 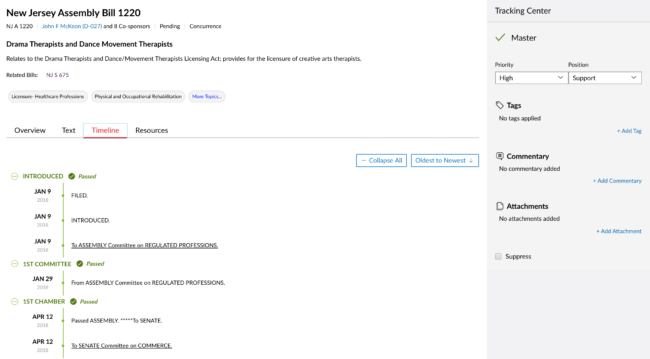 A new feature is the Timeline tab that shows a visual timeline for the bill. The Timeline shows the steps in the legislative process through which the bill must progress and where it stands in that process.

A final tab, Resources, collects information about the bill, such as statements related to its filing, fiscal estimates, and the like. State Net does not collect or provide testimony submitted for or against bills.

The new Momentum Meter is designed to tell users how fast or slow a bill is moving compared to the historic average. One benefit of this to lobbyists would be to flag fast-moving bills so that they can keep an eye on them.

As a registered lobbyist myself here in Massachusetts where I’m based, I was curious about the accuracy of the Forecast tool, which purports to forecast the outcome for a bill as it moves through each stage of the legislative process.

The tool uses machine learning to identify factors that correlate with a bill’s passage at each stage. According to an explainer, these models are customized for Congress and each state legislature, as well as for each legislative chamber.

To forecast a bill’s fate, the tool looks at more than 40 factors, including the partisan composition of the chamber, the relevant legislative committees and past passage rates, the author’s leadership position and committee assignments, the author’s past success rate, and the bill’s current stage in the process. (A yet-to-be-published State Net white paper says the analytics use 72 data points.)

According to Lewis, this tool is accurate more than 80% of the time. To the extent it is wrong, the company says, it is sometimes because of factors that an algorithm could not predict, such as that a sponsor is not motivated to advance a bill.

These same factors are also used in the Momentum analytics.

“Government affairs and compliance work has never been more complex,” says the forthcoming white paper, “yet we believe data science and analytics can help professionals quickly make sense of massive amounts of information with confidence.”