In 2017, a group of longtime and prominent members of the International Legal Technology Association, unhappy with the association’s direction, broke off and formed an alternative, the Association of Legal Technologists.

At the time, nQueue CEO Rick Hellers, who spearheaded the split, wrote on LinkedIn that he and others were concerned about ILTA’s overall direction and the “widening gap between the organization’s core values and the actions of its leadership.”

In February 2018, ALT held its first conference, called “ctrl ALT del,” a three-day program billed as a “design think forum for a new organization – one that aims to live up to the ideals and standards set by ILTA.” In particular, it aimed to foster collaboration among three core groups within the legal technology ecosystem: vendors, consultants and law firm IT and KM professionals.

By all accounts, that first conference was a success. The three target groups showed up in roughly equal proportions, for an attendance of around 140. News reports, blog posts and social media praised the conference’s design-thinking format, led by Margaret Hagan, director of the Legal Design Lab at Stanford Institute of Design. Both during and afterwards, the conference generated significant buzz.

One ALT founding member described that first conference to me as a “love fest.” If so, then ALT’s second conference, held last week in Scottsdale, Ariz., was the morning after. It was the moment when ALT’s membership woke up, looked around the room, and collectively asked themselves whether this had been a brief fling or would be a lasting relationship.

A Reckoning for ALT

This second ctrl ALT del felt like something bigger than simply a conference. It felt as if it was a reckoning point for the viability and future of ALT as an organization.

That tone was set from the opening moments, when David Umlah, who directs business development for ALT, standing in for an ailing Hellers, now ALT’s executive director, said that the conference organizers were disappointed by this year’s attendance. Although ALT had hoped to increase attendance from last year’s 140 or so, the number dropped to just below 100. 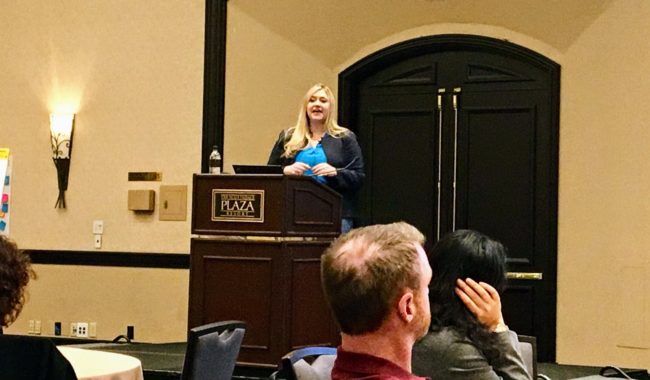 The number was only part of the attendance story. Conspicuously absent from the conference were several of ALT’s founding members. Time and again, in casual conversations and cocktail banter, the question of their whereabouts came up. Meanwhile, Hellers, who lives in Phoenix, remained sick and never attended any of the daytime programming. (I was told that he did attend one of the evening events.)

Also largely absent from the conference were law firm participants. Just 23 attendees were from law firms. Roughly half of the attendees were vendors from sponsoring companies, and the remainder of the roster consisted mostly of consultants. Several vendors told me that they were disappointed by the low turnout from law firms, since they were they audience that the vendors paid to be in front of.

Why this disappointing turnout? Speculation varied among those in attendance in Scottsdale. One common theory was simply that the timing was bad. The conference was sandwiched between two major legal technology conferences – Legalweek in New York two weeks earlier and ABA TECHSHOW two weeks later. Given this, budgets and schedules may have kept some away.

But speculation also focused on the very circumstances that gave rise to ALT in the first place. ALT was borne out of dissatisfaction with ILTA. But in the intervening period, ILTA has taken a number of steps to address its members’ concerns. Most notably, it recently named as its CEO Joy Heath Rush. Rush is well respected throughout ILTA’s ranks and is equally well respected, from what I heard, among ALT’s leadership and membership.

Thus, the anger and dissatisfaction with ILTA that fueled ALT’s formation and energized last year’s conference has largely waned, if not disappeared. Nothing underscored this more than the fact that Rush attended last week’s conference, where she was warmly welcomed and was invited to share remarks – an opportunity she seized to thank and praise ALT’s leaders and organizers.

Within this subplot of disappointment over attendance, the irony is that the conference felt like just about the right size. For me as a first-time attendee, the conference’s size was one of its strong points. It created an intimate atmosphere that encouraged introductions and conversations. A top reason to attend any conference is networking, and networking was in abundance here.

Driving that was the format, which, like the prior year, was organized around a theme of design thinking. For the first two days, each morning and afternoon started with a keynote speech on a specific topic. Each keynote was followed by a panel that further explored the topic from different perspectives. 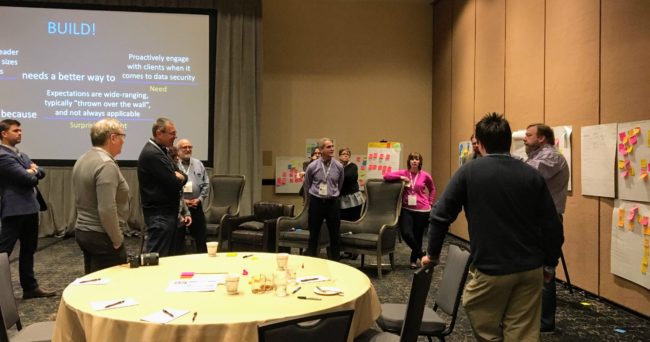 Participants in a design thinking breakout session present their prototype.

After the keynotes and panels came design thinking sessions led by Andy Peterson, cofounder of the consulting firm Design Build Legal. Peterson’s programming included both training in design thinking principles and small group exercises to put that training to work. The small-group breakouts were highlights of the conference, bringing together participants from diverse backgrounds to collaborate on ideation and prototyping.

The third day wrapped up the conference with a two-hour open discussion in which attendees shared their thoughts. Here again, the comments focused largely on the reduced attendance and lower participation by law firms.

One attendee mirrored the speculation I’d already heard. “Last year, we were brought together by a problem, and that problem was ILTA,” he said. “Now we don’t have that problem, so we need to identify the problem that is bringing us together.”

But others said there is good reason to have both conferences – ILTA’s and ALT’s. “ILTA is too big,” one said. “We need a conference of this scale and size.” Another, a law firm IT professional, echoed that he likes the conference’s smaller size, particularly because of the concentration of vendors with whom he can have one-to-one discussions.

Feedback from A Founder

When I spoke with Flournoy, she said that, although she got a lot out of last year’s conference, she did not attend this year because she decided that it would be more important to spend her budgeted conference allotment to attend the CLOC conference. 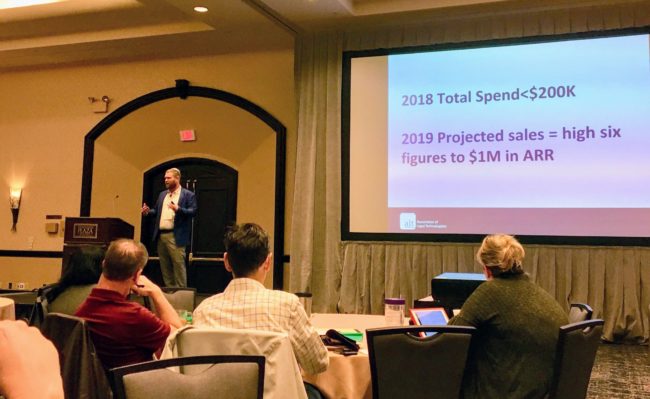 Zach Abramowitz, CEO of ReplyAll and columnist at Above the Law, speaks on new legal service delivery.

“It is unfortunate that the momentum didn’t carry forward from last year,” Flournoy said, “but part of the reason was because the people who were deeply involved initially, for a variety of reasons didn’t continue to be involved at the same level.”

The original purpose of ALT, she believed, was to focus on firms that may not have the depth of resources that a larger firm might have. If that is where ALT wants to maintain its focus, that would make sense, she said.

“What they won’t ever do is, I think, replace or compete with ILTA,” Flournoy said.

Flournoy believes the conference can continue in future years as a forum that brings firms and vendors together. But vendors have limited dollars to spend, so organizers will need to put in the effort to get firms there and make it worthwhile for the vendors.

The Future for ALT

So what does this all mean for ALT and its conference?

Umlah, in his remarks opening the conference, said that the organization has an aggressive plan to build its membership in 2019, with a goal of 500 members by the end of the year.

Toward that end, ALT has formed a young leaders committee, chaired by Anna McGrane, COO of PacerPro, and Aikta Wahi, director of customer relations at PacerPro, and composed of a cross section of practicing attorneys, legal professionals, and technologists. Part of its mission will be to raise awareness of ALT among younger professionals and recruit more of them as members.

ALT is also looking at possible changes for its conference. It is considering holding it later in the spring, to avoid conflicts with other legal technology conferences. It is also considering holding smaller one-day programs in regional locations around the country to make it easier to attend.

During that open-discussion session on the last day of the conference, two comments particularly stood out to me. One, by Debbie Foster, partner in Affinity Consulting Group, was the simple observation that no organization can be everything to every group in legal, and therefore should not try to be. The other was by Brad Blickstein, principal of Blickstein Group, who said, “There is an energy here that feels like something that’s worth being part of.”

Given ALT’s success with its first conference, it was inevitable that this year’s conference would be weighed down by comparisons. But for this first-time attendee, the irony of all this hand-wringing was that this conference stood firmly on its own two feet. Its keynote speakers could have been keynotes at any legal technology conference of any size. Its varied format of speakers, panels and exercises was both educational and energizing. Its scale encouraged networking and collaboration.

Blickstein was right. There was an energy at the conference that was worth being part of. The challenge for ALT – both as an organization and a conference – is to better define the purpose behind that energy and then use that to build membership and attendance.

No organization can be everything to everyone, as Foster said. Now that the dissatisfaction with ILTA that fueled its formation has subsided, ALT needs to figure out exactly what it is and who it serves. Last week’s formula of an intimate conference that strove to bring together vendors and firms was close to the mark.

[Disclosure: ALT covered the cost of my registration and hotel room to attend the Scottsdale conference.]