Kicking off his company’s Clio Cloud Conference in New Orleans this morning, cofounder and CEO Jack Newton announced that Clio has acquired Lexicata, the cloud-based client-intake and client relationship management platform. This month marks Clio’s 10th anniversary since its launch and its first acquisition.

Clio and Lexicata have been long-time integration partner and the two companies say half of Lexicata’s existing customers already use Clio.

Clio describes the acquisition as a “defining moment for the legal industry” and says the acquisition marks the first step towards Clio’s vision to provide the first entirely client-centered and firm-focused product suite that will include practice management, CRM, and client intake. 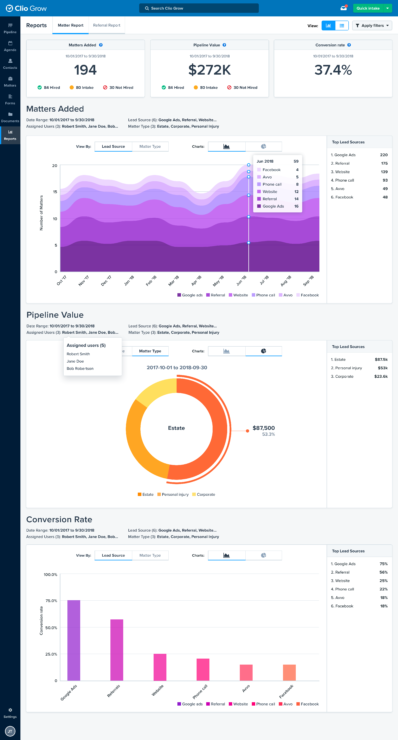 A preview of Clio Grow

Clio says it will develop Lexicata into a more advanced client engagement platform called Clio Grow, to be launched to the public early in 2019.

An early version of it is being launched today and made available to conference attendees for free for three months. This early version is essentially a reskinning of the Lexicata product.

“The founders of Lexicata and I have always shared a passion for creating transformative technologies that will move the industry of law forward,” Newton said in a statement released this morning. “To that end, we are excited to welcome Lexicata into the Clio family as we build the next frontier of legal technology.”

Michael Chasin, cofounder and CEO of Lexicata, said he is excited to become part of Clio. “Clio has always been the leader in practice management, while we’ve focused on client intake. We have long shared Clio’s core vision for improving the legal industry, as well as Clio’s innovation-embracing values. This is a tremendous natural progression of everything we’ve built so far.”

All of Lexicata’s employees will remain with the company and they will remain in their Los Angeles office.

I first wrote about Lexicata soon after its launch in 2015. Although others have come along since, it was the first cloud-based CRM and client intake system designed exclusively for law firms.

Newton said that the decision to acquire Lexicata was influenced by this year’s Legal Trends Report, also being released today. It finds that 57 percent of consumers have faced a legal problem they didn’t pursue with the help of the law. Additionally, of consumers who faced a legal issue in the past two years, 68 percent communicated with a lawyer they did not hire, and 58 percent had a formal consultation with a lawyer they didn’t hire.

“The research put into the Legal Trends Report and our acquisition of Lexicata are just the first steps in our commitment to bridging the lawyer-client gap, and we have so much more planned for 2019,” Newton said.

Clio says its new Clio Grow, which will be sold as a separate product but fully integrated with Clio, will help firms better understand where leads come from and what actions are required to convert them to clients. By streamlining the client acquisition process and measuring the ROI on firm marketing, Clio Grow will help firms increase their total business revenue, Clio says.

Clio also says that its acquisition of Lexicata marks its shift to becoming a multi-product service provider that is focused on creating a more client-centered approach to managing the end-to-end experience of working with a law firm. Clio’s ongoing vision sees technology playing a crucial role in helping lawyers to be hyper-focused on delivering the type of responsive, informed service that today’s clients already expect.