The vast majority of process servers are honest, hard-working people. But the sewer service story raises an important question for lawyers: How can you ever really know what’s going on with the papers you entrust to a process server and how can you later validate service should it come into question?

Part of the answer, one company believes, lies with blockchain technology.

Unless you’ve been living in a cave for the last year, you’ve no doubt heard about blockchain. It is the technology that underlies cryptocurrencies such as Bitcoin and Ethereum. Using peer-to-peer networks to chain together blocks of records, blockchain creates an immutable ledger of transactions that is extremely difficult if not impossible to modify.

In the legal industry, blockchain is the latest buzzword. Law firms and industry groups are rallying around its potential applications in law. But even with all the buzz, it is sometimes difficult to visualize how blockchain might be used in our day-to-day practices.

Which brings us back to service of process.

Two companies — ServeManager, which markets a software platform for process servers, and Integra Ledger, which is developing a blockchain for law — recently worked together to develop a proof of concept (POC) for the use of blockchain as a means of verification of service of process. Yesterday, I was given a demonstration of the POC by Trent Carlyle, cofounder and chief technology officer of ServeManager’s parent company Lawgical, and Chad Jolly, senior software developer at Lawgical.

The idea behind the POC is to use blockchain technology in order to provide courts, lawyers and others connected to a case with access to verifiable, untampered data on service of process, Carlyle told me.

This POC does this by storing service-of-process data from ServeManager’s mobile application on Integra’s blockchain ledger. When a process server makes or attempts service, the app sends the metadata to Integra. On Integra, a record is created that includes the GPS coordinates, the GPS timestamp, the mobile device used, and other information. That record is given a unique blockchain ID that can subsequently be viewed by anyone to verify the service attempt.

That ID could be included on the affidavit of service so that anyone looking at it subsequently could simply plug in the ID on Integra, bring up the record, and confirm that it matches with the information on the affidavit.

You can see this in action here: Service of Process Blockchain Verification. (Just click Search; an ID is already entered in the search bar.) Read more about it in this article.

The ID could also be used as part of an accountability report within ServeManager that would use GPS activity data to confirm not only the server’s whereabouts at the time of service, but also in the hours surrounding it. 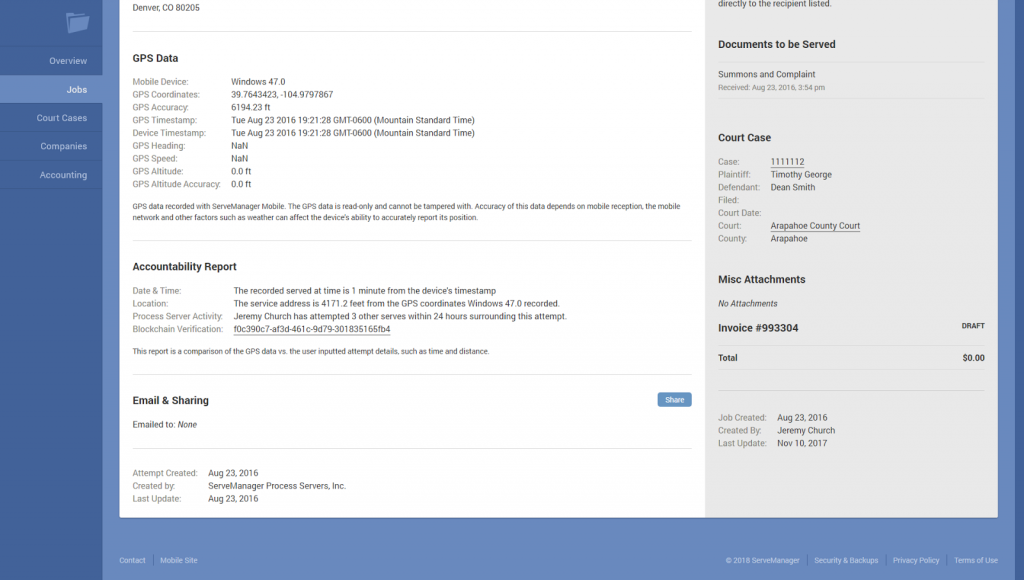 ServeManager was already collecting this data on its own servers. But by posting it to the blockchain, a record is created that cannot be changed or tampered with, providing a higher level of verification, Carlyle and Jolly said.

This POC stores a record of only the successful service, but it could be easily expanded to store a full record of all service attempts and to include more information about each of those attempts.

Ultimately, blockchain technology could preclude the need for hard-copy proofs of service, they believe.

“Do we still need to produce the piece of paper?” Carlyle said. “The blockchain is essentially the affidavit. It can tell you everything digitally and provide more valid proof than what is on an affidavit.”

Although ServeManager developed this as a proof of concept, the POC is ready to implement once the Integra Ledger formally launches. In the meantime, ServeManager will be exploring whether its customers — process servers and law firms — have interest in using this technology.

“The idea is more powerful and interesting than anything else right now,” said Jolly. “There is nothing all that interesting about the technology — this is just a single API call. But one of the big questions going forward is how you explain this to a judge.”

[Disclosure: ServeManager’s parent company Lawgical also owns the Legal Talk Network, which produces two podcasts I cohost, Lawyer 2 Lawyer and Law Technology Now. I earn no money from these podcasts and have no direct financial relationship with the company.]