As an associate at Sidley Austin who often provided pro bono legal help to low-income people, Dorna Moini came to believe that much of legal technology is designed to benefit corporations and higher-income individuals, while not a lot of technology is designed to help those with low and moderate incomes. So earlier this year, she left her job at Sidley to start a company that would design technology for the clients she came to know through her pro bono work.

That company, HelpSelf Legal, is launching today with its first product, an automated platform that will help users file to obtain domestic violence restraining orders. “With the legal system stacked against women in the first instance, we think this will be crucial in bridging the justice gap,” Moini told me.

Eventually, Moini plans to add other areas of legal need, including civil harassment, evictions, child support, guardianship and conservatorship. The platform serves only California matters for now, but Moini hopes later to expand into other states.

A user who logs in to the system is taken to a dashboard where she sees all of the documents they have already filed or started. To start a new document, they select the type of document they want to create — which, as I said, so far is only a domestic violence restraining orders but which will later include other options. 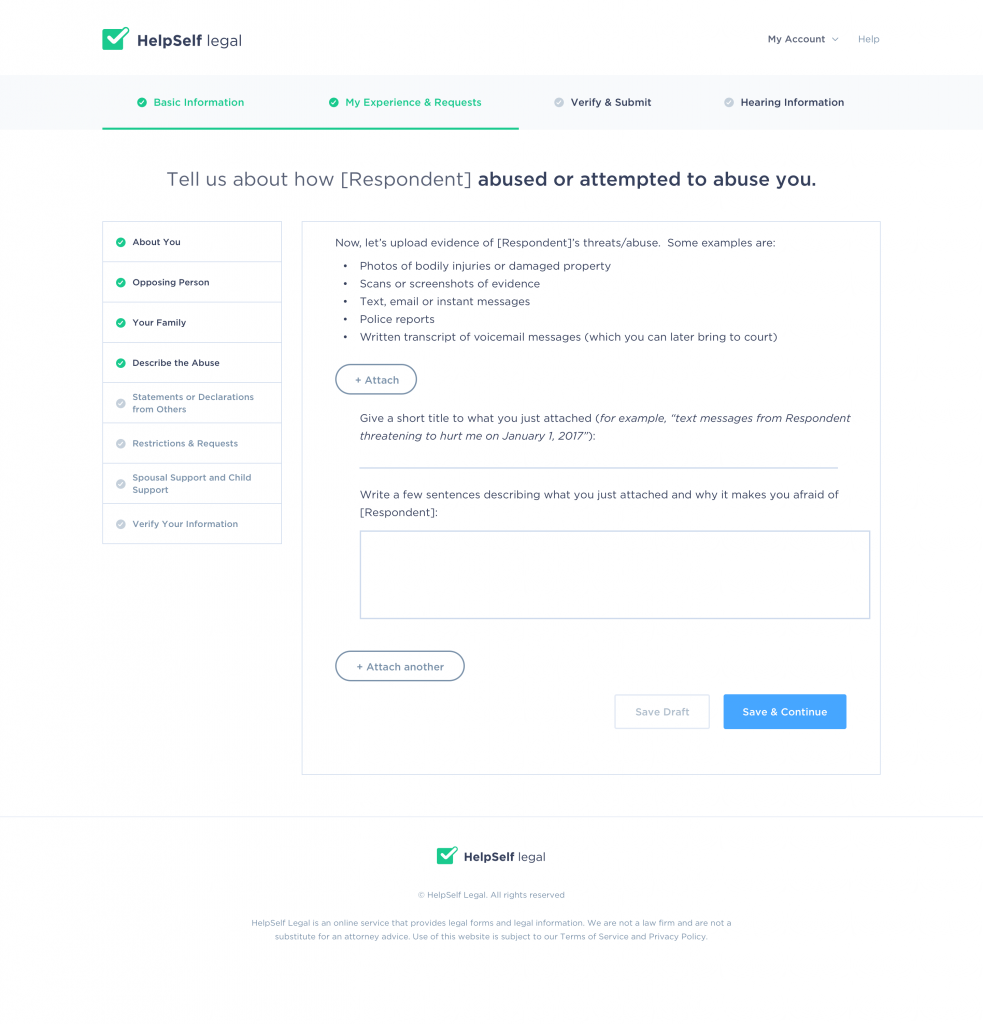 A step in the questionnaire asks the user to describe the abuse.

The platform then walks the user through a series of questions, beginning with choosing the court in which the document will be filed. (The system provides information to help the user choose the correct court.) Once the user chooses the court, the system asks a series of interview questions about the user, the person against whom the restraining order is sought, the nature of the abuse, whether the user wants to request support, and more. A guide on the left shows the user the categories of questions and where the user is in the process of answering them.

Once all the information is provided, the platform prepares all the pertinent documents. The user can preview and verify each document and then, when they are ready, either download the documents to file on their own or choose to have HelpSelf file the document with the court electronically.

The e-filing option is available only in counties that allow it and some counties charge for e-filing. For individual users, the e-filing charge will be added to the $15 charged by HelpSelf.

The forms are mostly based on California Judicial Council forms and local court forms. Filing for a restraining order also requires a declaration, which HelpSelf creates based on the user’s answers to the questionnaire.

Moini said that an important consideration in designing the platform was to focus on the user experience and make it as friendly as possible. She also wanted to ensure that the platform would be optimized for mobile users, who she believes will be the greatest percentage of HelpSelf’s users.

“In the U.S., three women are killed each day by a current or former partner, and intimate partner violence affects over 38 million women in their lifetimes,” Moini said. “Domestic violence restraining orders provide distance, financial support orders, and court guidance on child custody/visitation. But the legal process is inaccessible and hard to navigate, particularly in rural areas. That’s where we come in.”