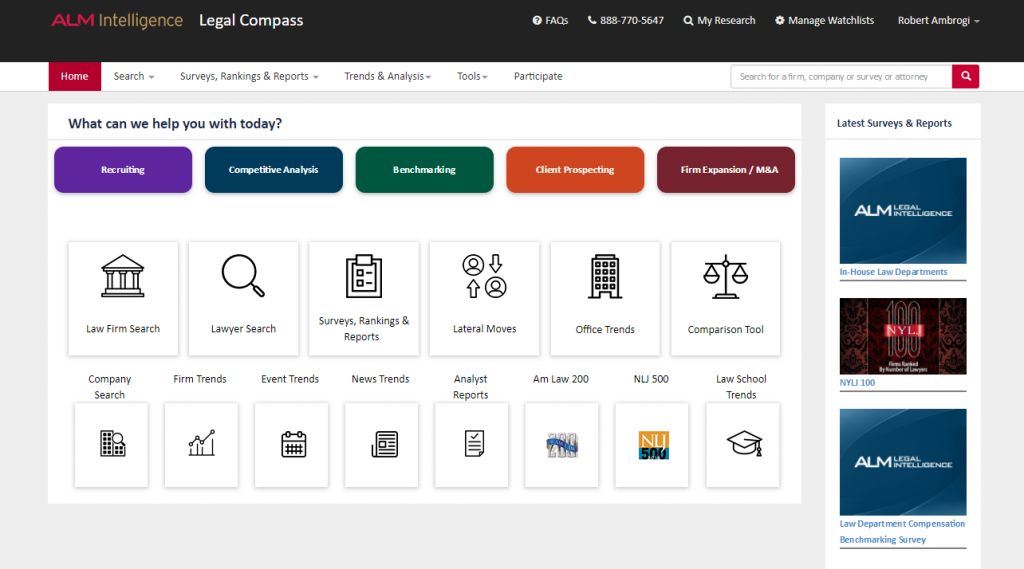 ALM is known for surveys and rankings that profile the legal profession such as the Am Law 100, NLJ 500, Global 100 and Diversity Scorecard. What you may not know is that ALM has nearly 150 such surveys, rankings and reports, tracking everything from law firm revenue to lateral moves to workplace diversity to pro bono service, and that some of this research data goes back 30 years.

Now ALM has launched a tool called Legal Compass that provides access to not only all of its data, but that is also pulling in data from external sources such as lawyers’ LinkedIn profiles and law firm Twitter accounts and mashing it all together in a variety of useful charts, graphics and visualizations. The tool currently tracks information on some 16,000 law firms, 300,000 lawyers and 4,000 companies, with more being added on a continuing basis.

“The idea is that if you can combine all this information about lawyers, law firms and clients in one place, then the whole will be better than the sum of its parts,” Eric Ryles, vice president, customer solutions, ALM Intelligence, told me during a recent conversation.

Legal Compass provides access to this data through a variety of search, visualization and comparison tools that allow users to drill down into specific firms, benchmark firms against other firms, and see comparative trends across several parameters, including location and practice areas.

Ryles recently gave me a demonstration of Legal Compass and provided me with a temporary password to try it for myself.

Legal Compass will primarily be of interest to those involved in law firm marketing, business development, and competitive intelligence. It would also be of interest to corporate counsel seeking to benchmark or evaluate outside law firms. 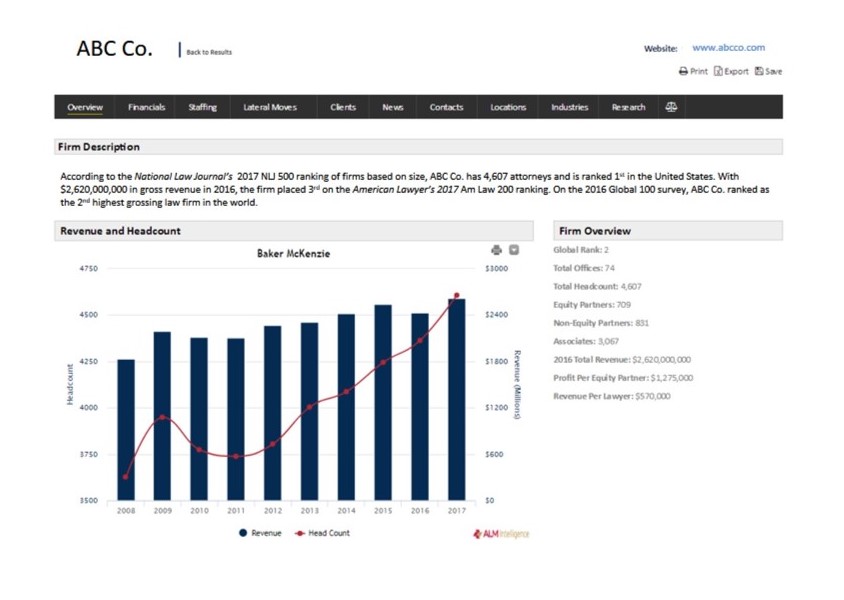 Extensive data is provided on each law firm.

Legal Compass includes data on law firm financials, headcounts, diversity, lateral moves, office trends, practice area changes, news coverage, events and more. For the firms it includes, it has at least five years of data, Ryles told me, and for some, it goes back much further. Some of the key ways to use this data are:

In addition, subscribers get access to the entire database of ALM Intelligence reports and analysis, including the Am Law 100, NLJ 500, A-List, Diversity Scorecard, and all the others. 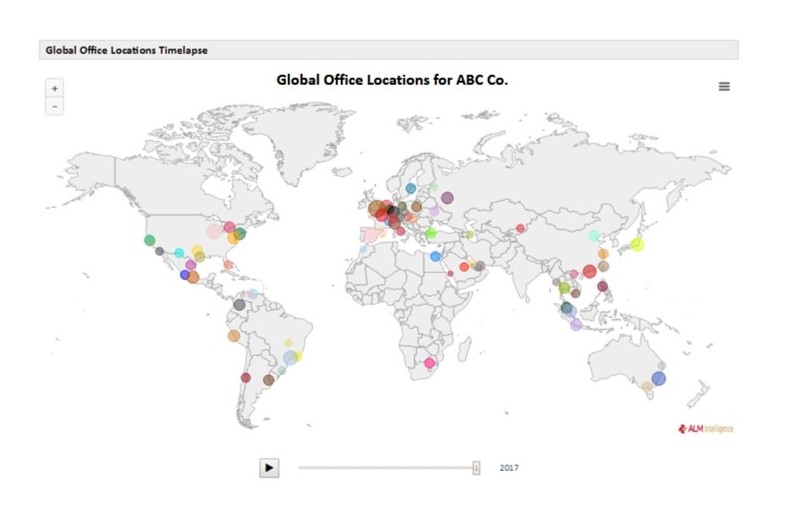 This time-lapse maps a firm’s office growth over 10 years.

ALM has done a good job building the search and visualization tools. Legal Compass has any number of the kinds of charts and graphs you’d expect to find in a tool such as this. But there are also some particularly clever ones. For example, a time-lapse world map shows the growth or contraction of a law firm’s offices around the world over the last decade. Lateral moves to and from a firm can be viewed as a list, by a geographic map, or via a nodal map. 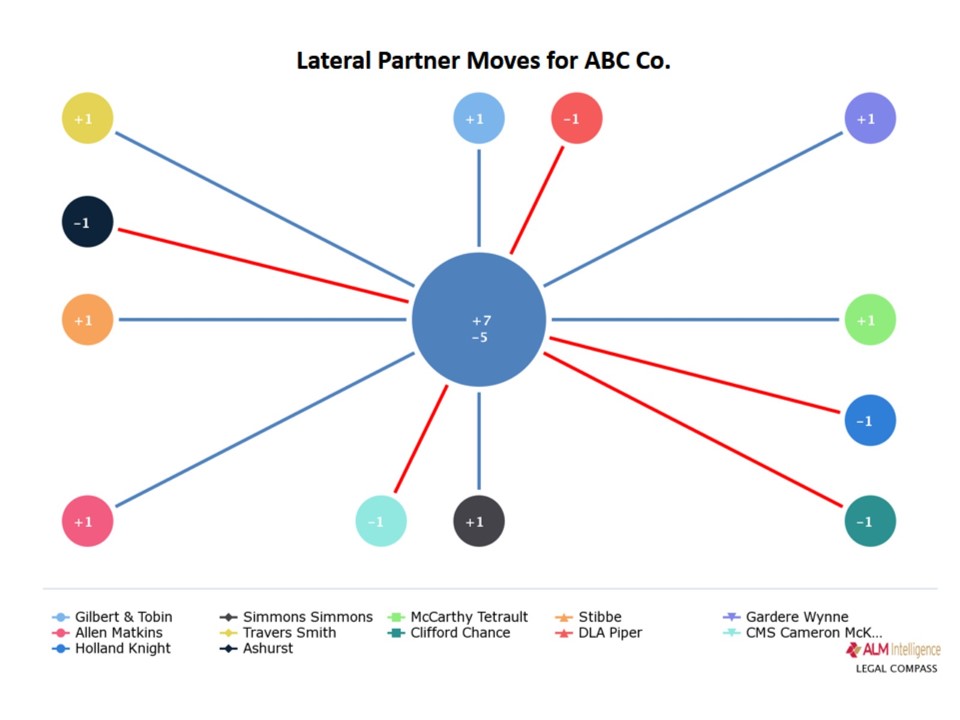 Lateral moves can be viewed using a nodal map.

When he shows Legal Compass to law firms, Ryles said, the feature they like most is the benchmarking tool. Benchmarking of a law firm can be done by selecting up to eight firms to compare it against, or by selecting a specific list, such as the Am Law 100. Benchmarks can be viewed in a “scorecard” form, via charts, or in a scatter-plot graph. The graphs and visualizations can be saved as image files to use elsewhere and charts can be exported as spreadsheet files. 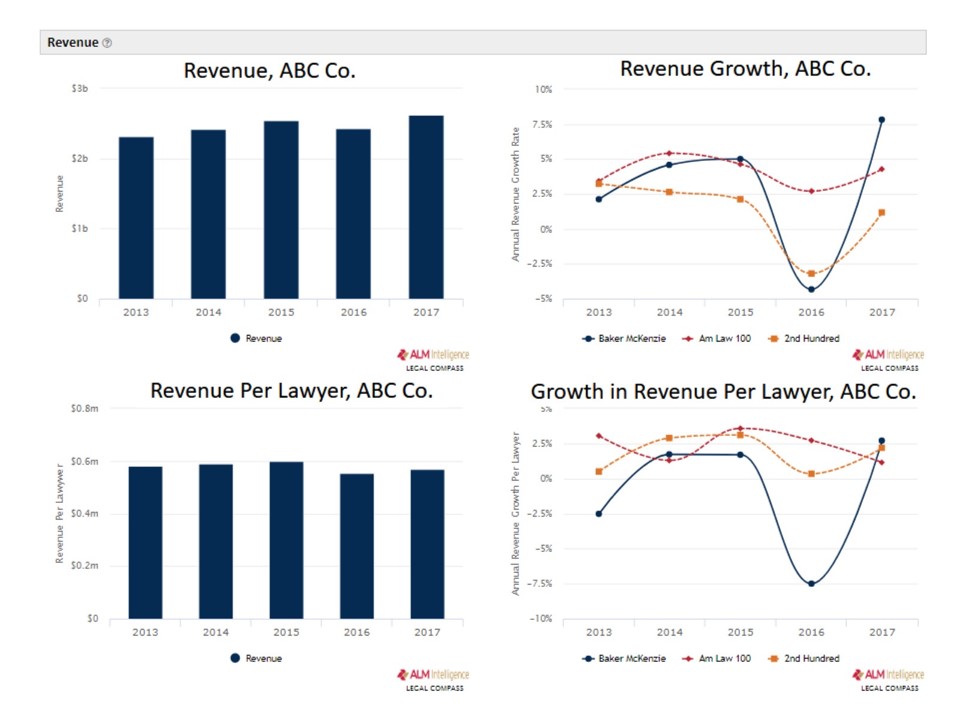 A variety of revenue and profit information is shown for each firm.

For law firms, a key feature is revenue and profitability tracking. Among the kinds of financials you can track are:

In addition to data on law firms, Legal Compass is tracking information and building profiles on approximately 300,000 attorneys, including regularly spidering law firm and attorney websites for changes. 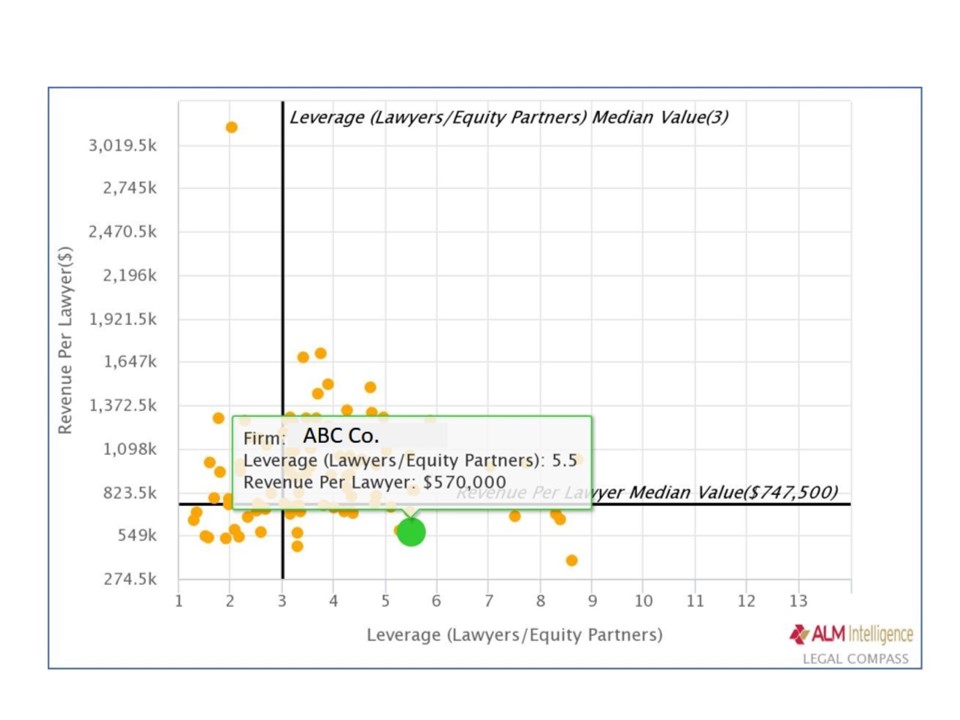 A scatter graph benchmarks Baker McKenzie against the Am Law 200.

Ryles told me that ALM Intelligence has launched a huge project to collect data from the LinkedIn pages of attorneys to map their entire careers. The first phase of the project, which is slated to be done within the next three-to-four months. is focused on about 100,000 lawyers from the Am Law 100. If it is successful, it will move on to the next tier of 100,000 lawyers, and eventually to 300,000 lawyers. 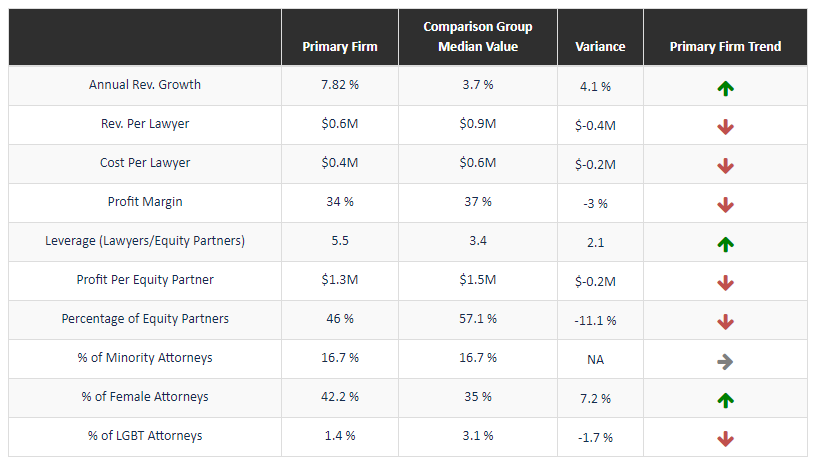 Benchmarking can also be shown in a scorecard form.

Based on that data, ALM Intelligence plans to create new kinds of career-focused analytics in Legal Compass that could show, as an example, that a lawyer who graduates from X law school typically takes X years to make partner.

ALM Intelligence soft-launched Legal Compass last May and officially launched it Nov. 9. More is on ALM’s roadmap for the platform, including an M&A tool that would show what would happen if two firms merge.

As for pricing, this is one of those products where the answer is, “It depends.” Ryles said that pricing depends on several factors, including size of firm and number of users. It will also depend on how the firm will use the data. If the firm wanted to use the data to release a series of white papers, for example, that would be a higher price than if the firm planned to use it only for internal benchmarking.

Legal Compass is a law firm analytics and benchmarking tool of greatest use to law firm professionals involved in legal marketing, business development and competitive intelligence. It would also be useful to legal departments in researching and evaluating outside firms. For the most part, it covers only large and mid-sized law firms, not solo or small firms.

The foundation of Legal Compass is ALM’s extensive and proprietary collection of data from surveys and rankings such as the Am Law 100 and the NLJ 500. In addition, it is collecting and normalizing data from external sources such as LinkedIn and Twitter and then combining all that internal and external data.

All of this is presented in a variety of interactive scorecards, charts and visualizations that provide a range of information about law firms, lawyers and clients. It can be used for benchmarking, competitive analysis, recruiting, prospecting, and strategic planning.

The execution of all this is very well done. The home page makes it easy to get started on a task – such as benchmarking or competitive analysis – by highlighting the tools and data sources that can help with that task. It is also easy to go directly to specific search or data types, such as lawyer search or lateral moves. Once you are in any of these sections, the search and filtering tools are easy to use and the graphs and visualizations make the data easy to understand and contextualize.

Since I do not know what the service costs, I cannot offer a cost-benefit analysis. But I can say that as a law firm benchmarking and competitive analysis tool, Legal Compass scores on both the depth of its data and the effectiveness of the data’s presentation.