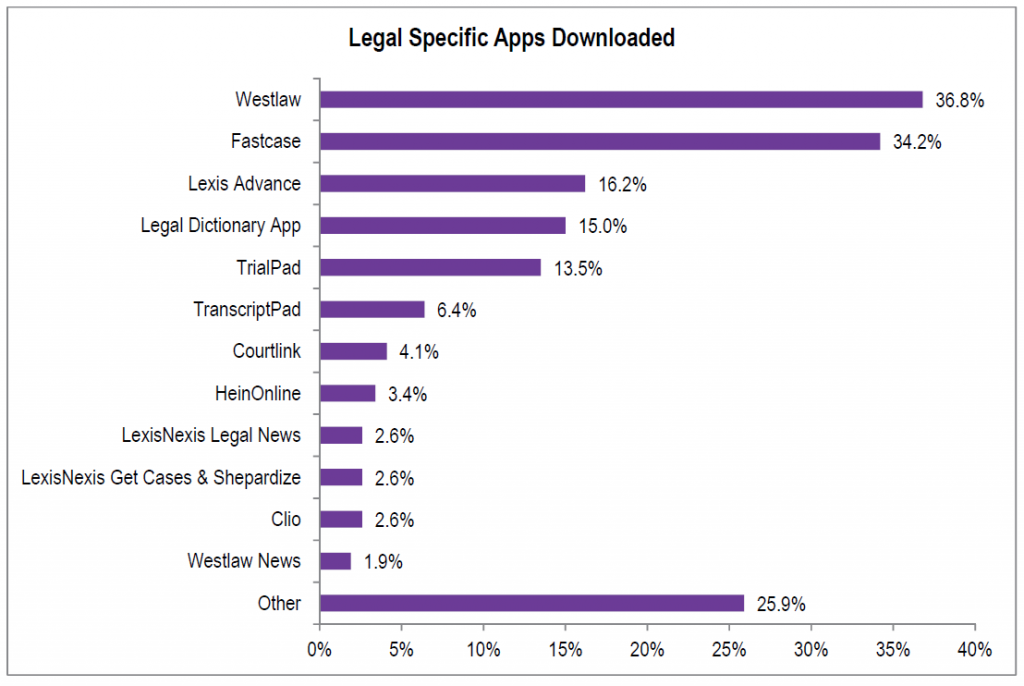 Only 40 percent of lawyers say they have ever downloaded a legal-specific smartphone app, but of those who have, the app they most frequently downloaded is Westlaw (37 percent), according to the survey.

But here is why I added “maybe” to that. The survey was conducted between January and May 2016. But Westlaw did not release a smartphone app until March 2016. (See: Westlaw Gets An App for News and Research on an iPhone.) Prior to that, the only app it had was for the iPad. iPhone users could access Westlaw through a mobile-optimized site, but not through an app.

So I’m not sure what to make of this result. It is possible, I suppose, that the Westlaw app leaped to top-place during the final two months of the survey. But it seems unlikely. The more likely explanation is that the survey respondents confused using Westlaw’s mobile-optimized site with having downloaded an app.

(As you’ll see below, there are a couple of other problems with the survey listing non-existent apps.)

The same number of lawyers — 40 percent — say they have downloaded a general business app for their smartphone. The most popular business apps they downloaded are Dropbox and LinkedIn, which were both mentioned by 70 percent of those who had downloaded a business app. Other popular apps are:

Overall, 93 percent of lawyers use a smartphone for law-related tasks outside the office. The percentage varies slightly by firm size, from 90 percent for solos to 96 percents for lawyers in firms of 100 or more.

The survey indicates that iPhone use among lawyers continues to grow each year while use of other systems is declining. The sharpest decline is in BlackBerry use — from 16 percent in 2013 to 3 percent in 2016.

Fifty-one percent of lawyers say they use a tablet for doing law-related work while away from their primary workplace. The use of tablets is statistically even across all firm sizes.

Among the lawyers who use a tablet, the most popular type is the iPad, which is used by 84 percent. Only 10 percent use an Android and 5 percent use a Windows Mobile device.

The survey can be purchased from the ABA. The full survey costs $1,995 and separate volumes cost $350 each.