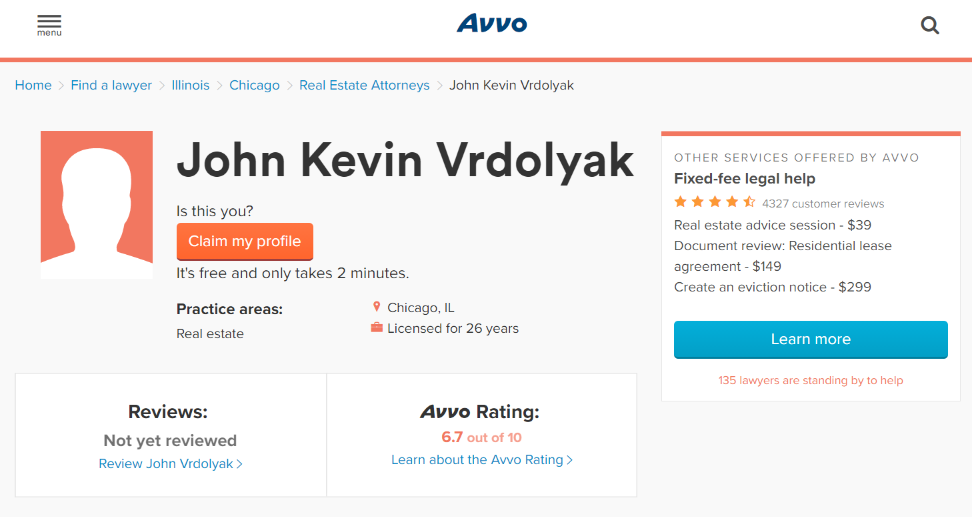 The listing that gave rise to the lawsuit.

A federal court has dismissed a putative class action against Avvo under the Illinois Right of Publicity Act, ruling that Avvo’s lawyer listings are comparable to the editorial content in Sports Illustrated and deserving of the same First Amendment protection. This is the second time in six weeks in which a right-of-publicity class action against Avvo has been dismissed.

[T]o hold otherwise would lead to the unintended result that any entity that publishes truthful newsworthy information about individuals such as teachers, directors and other professionals, such as a newspaper or yellow page directory, would risk civil liability simply because it generated revenue from advertisements placed by others in the same field.

The plaintiff had analogized his case to one brought by basketball star Michael Jordan against Jewel Food Stores after Jewel placed an ad in a commemorative issue of Sports Illustrated honoring Jordan’s
induction into the Basketball Hall of Fame. Jordan claimed the ad violated his trademark and the Illinois publicity law. Jewel argued that, because its ad did not propose a commercial transaction, it was non-commercial speech protected by the First Amendment.

The 7th U.S. Circuit Court of Appeals sided with Jordan, holding that the ad had a commercial purpose and was therefore commercial speech entitled to a lesser standard of constitutional scrutiny.

Judge Gettleman disagreed, finding that the correct analogy was not to the ads in Sports Illustrated, but to its editorial content.

Based on this reasoning, Judge Gettleman concluded that Avvo’s lawyer listings are fully protected by the First Amendment and that plaintiffs’ attempted application of the right of privacy law does not survive a strict scrutiny analysis.

Last month, a California lawyer dropped his putative class action against Avvo after Avvo brought a motion to strike the complaint under California’s anti-SLAPP law. You can read more about that case in my earlier post.

“This is further validation that publishers like Avvo needn’t obtain the consent of their subjects prior to exercising their First Amendment rights,” Josh King, Avvo’s chief legal officer, said in a statement issued last night. “The purpose of a free and unfettered media is to provide transparency and openness. While we never felt like the principle was really at risk here, we’re pleased at the explicit recognition that our efforts to help people better understand lawyers and the legal profession is fully protected by the First Amendment.”