Over at PrawfsBlawg, as they commemorate their tenth anniversary, they’ve been ruminating on the question of how legal blogging has changed over the past decade. As professorial types tend to do, they have been putting forth all sorts of hypotheses, most more or less pointing to the same conclusion, which is that blogging — at least blogging by professors — is dying. As you read through their posts, you might think the anniversary was actually a funeral. 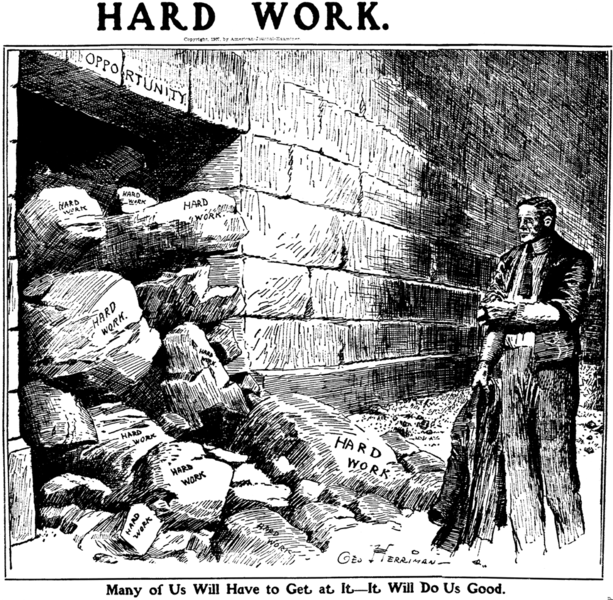 As someone who has been doing this for more than 12 years, I have my own thoughts about how blogging has changed. I strongly disagree with any suggestion that blogging, as a medium of communication, is declining. But there is one simple fact that accounts for the decline of at least some blogs. It is the same fact that, to my mind, most accurately and concisely sums up how blogging has changed in the last dozen years.

The fact is, blogging has gotten harder. A lot harder.

What’s made it harder? Competition.

Imagine the early days of a now-major city in America’s west, when only a few ramshackle buildings stood along a dusty street. Arrive there and set up the first restaurant or the first general store and you would immediately stand out. But to open a restaurant or store in that same city today and succeed at becoming known would be an enormous challenge.

A dozen years ago, the Internet was still a ramshackle frontier town. Set up a blog back then and you easily stood out for the simple reason that you were one of the first and only of your kind. Non-bloggers looked at you with a sense of curiosity and intrigue, wondering just what was this newfangled technology.

Just blogging is no longer enough to make you stand out or retain readers. You need to work at it. You need to develop a distinctive theme and then follow through on that theme with consistent, timely and quality posts.

“Blogging is a young person’s sport,” writes a weary-sounding Paul Horwitz in his contribution to the PrawfsBlawg tenth anniversary series. He is talking about more than age. He is talking about the expanding sphere of professional and personal commitments that come with age, the greater frequency of health-related interruptions, and the simple tedium of writing about something for the umpteenth time. “I admire those whose energy and commitment has stayed high for a long time, but I’m not one of them,” Horwitz says.

Even for a younger person, blogging is not easy. Hesitate for a moment and someone else has already the covered the story you were about to write. And maybe they’ve done it even better and more thoughtfully than you would have. Where does even a younger lawyer find time to keep up with news and find topics to write about? How does any full-time lawyer compete with blogs that churn out posts throughout the day with machine-like consistency?

Another PrawfsBlawg post, this one by Dave Fagundes, hits on part of the reason blogging has  become harder, which is that it has become more serious. “[M]ost of what people take the time to write is legal analysis, law current events, opinions about these things, etc.” Again, he is talking about academics, but the point is true of a range of legal blogs. Bloggers are writing longer, more analytical and more serious posts.

Still another of the PrawfsBlawg posts, this one by Dave Hoffman, lists several reasons for why “the energy left the building” of academic blogging. Among them are that “the party is elsewhere,” by which he means Twitter and LinkedIn and Facebook; “because of preemption,” that whatever a blogger may write has been written already; and “because we didn’t innovate,” meaning that “blogs have remained stagnant in form.”

Blogging is not dying, it is thriving. Because it is thriving, it has become an enterprise. Big firms have paid writers on staff producing blog content. Marketing and PR firms now have units that specialize in sending their customers canned content to use on their blogs. Law.com now has an entire network of blogging contributors. Above the Law has made legal blogging into a full-fledged business — and what appears to be a pretty successful one at that. Competition abounds, and it comes from all corners.

If you want to blog successfully, you still can. You don’t have to be young. You don’t need inhouse writers or outside marketing firms. But you do need energy and commitment. Horwitz was right about that. And you need to enjoy it. Otherwise the energy and commitment get you nowhere. Blogging takes work. It can be hard work that can wear on you. But it can be rewarding. And it can also be fun. Once it’s not, that’s probably the time to move on.