A year ago, I wrote here about Orion, the practice-management system designed for mid-sized law firms, and its app for iPad and iPhone, iOrion. At LegalTech New York in February, Orion announcing the forthcoming release of version 2.0 of its app, with new features and functionality. I’ve been testing a pre-release version of the upgraded app on an iPad Mini (thumbnails above) and an iPhone 5s (image below) and here is what I’ve found.

For those of you who are not familiar with Orion, it is a full-featured financial management, firm management and practice management system designed for mid-sized law firms. Whereas many practice management systems for smaller firms operate via the cloud, Orion is a locally installed system that is able to integrate with a firm’s back-office infrastructure and front-office tools. (See this comparison chart by Sean Doherty at Law Technology News.) 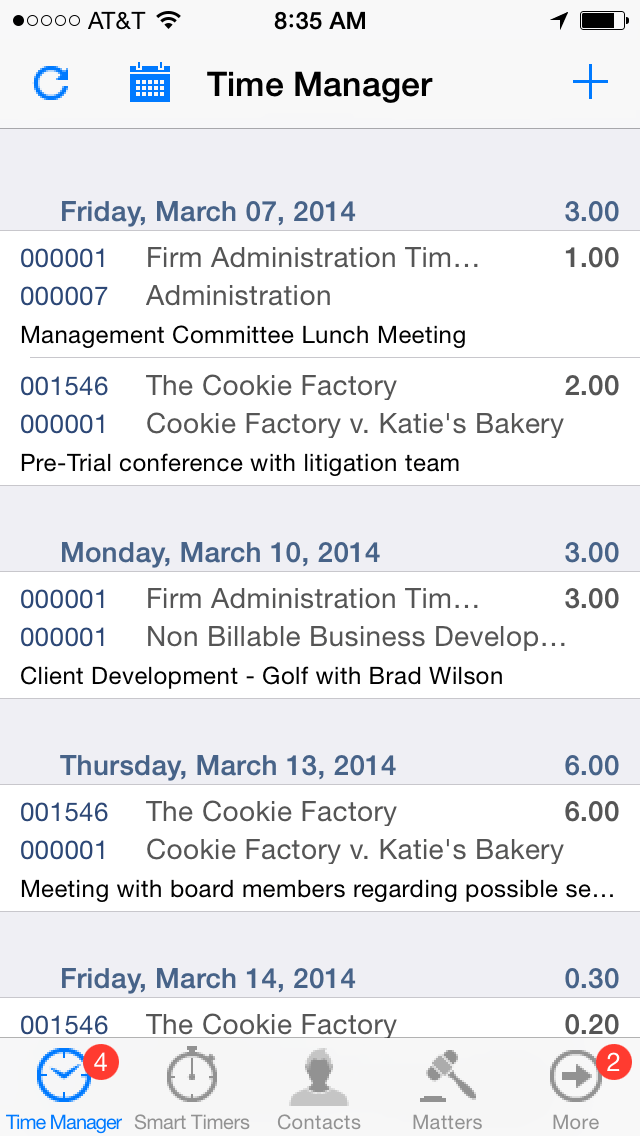 As I noted last year, it is unusual for a locally installed system such as this to have a full-featured mobile app on a par with apps for cloud-based systems. Yet I concluded then that the iOrion app was not only on a par with other practice management apps, but that it actually surpassed others in the range of features and access to data it offered. (You might want to refer back to my prior post for a full description of the app’s features.)

With version 2.0, the company is aiming to make its app a true replica of the functionality of the desktop version, according to Kevin Harris, the iOrion project manager. “We’re not trying to replace the desktop with the app,” he said, “but we want them to complement each other.”

The primary change over the app’s prior version is in added functionality. With several new features added to the Orion platform over the last year, the app has been upgraded to incorporate those features.

The most significant of these is the new Expense Reimbursement Manager, which is new to both the Orion platform and the iOrion app. As its name suggests, this is a system for submitting and managing reimbursement requests, eliminating manual, paper-based expense-tracking systems.

Now, reimbursement requests can be submitted through the app and all communications regarding the request can be tracked through the app. Adding a request is done through a pop-up, from which the user can designate the amount and nature of the expense and the client/matter to which it relates. Paper receipts can be scanned with the device’s camera and attached and electronic receipts can be directly attached. Alerts notify the attorney if a request is denied or if more information is required. The advantage to attorneys is that they can add expenses and receipts as they incur them, using their iPhone or iPad.

As with the prior version, the app continues to allow access to all contacts, key case information, and key client and matter financial information. Customizable “Smart Timers” allow users to track time for multiple matters.

In addition to announcing the updated app and the Expense Reimbursement Manager at LegalTech, Orion also announced its new Productivity Pack for Microsoft Office. The Productivity Pack provides greater integration between Orion’s desktop version and Office applications such as Word and Outlook. This includes the ability to capture and record time from within Office and the ability to link Outlook appointments and tasks with clients and matters in Orion.

iOrion version 2.0 is awaiting final approval from Apple. Once it gets that approval, it will be available for download in the iTunes Store. The current version of the app (1.3.0) is available here.