The pandemic caused civil courts in the United States to adopt technology at an unprecedented pace and scale, improving participation in court proceedings and helping users resolve disputes more efficiently.

But this accelerated adoption of technology disproportionately benefited those who had legal representation, sometimes making the legal system more difficult to navigate for those who did not.

These are among the key findings of a report being released today by The Pew Charitable Trusts, How Courts Embraced Technology, Met the Pandemic Challenge, and Revolutionized Their Operations. 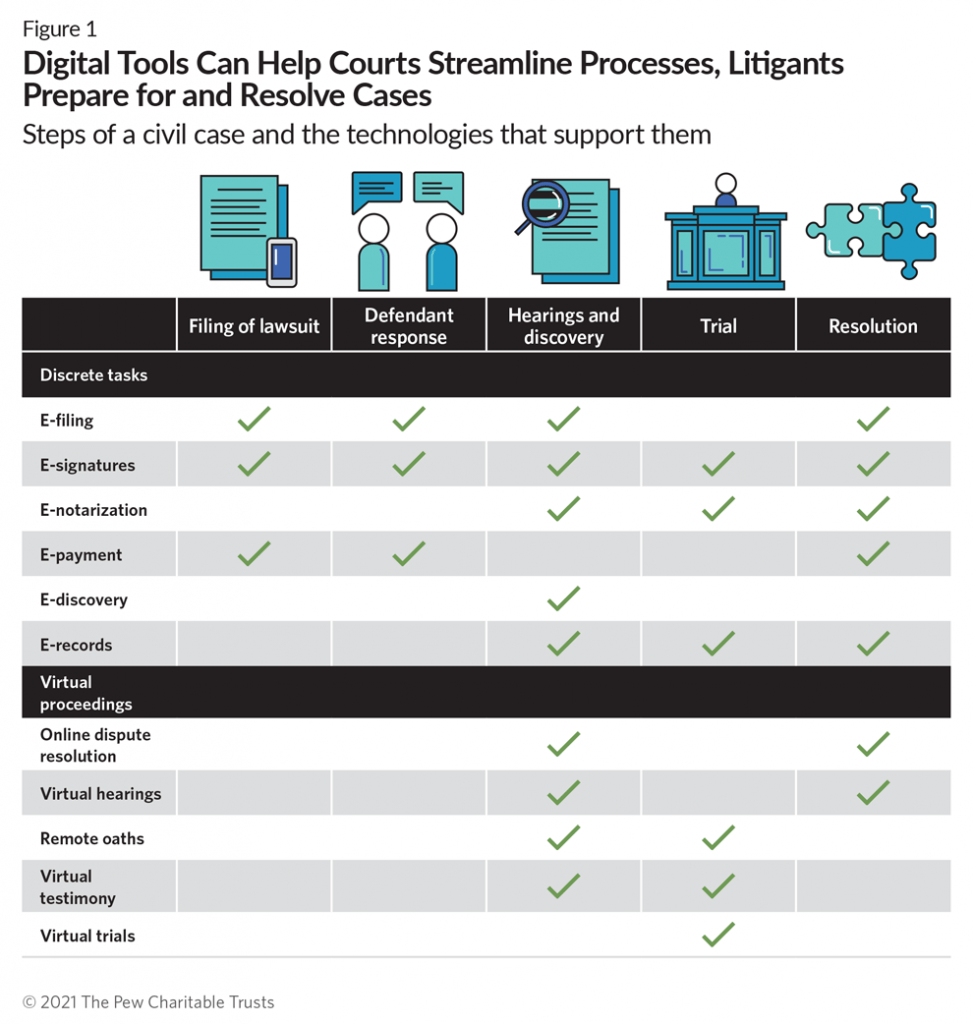 Prior to the pandemic, the report says, courts’ adoption of technology focused on discrete tasks rather than sweeping changes.

Pew researchers examined pandemic-related emergency orders issued by the supreme courts of all 50 states and Washington, D.C. They supplemented that review with an analysis of court approaches to virtual hearings, e-filing, and digital notarization, focusing on how these tools affected litigants in three of the most common types of civil cases: debt claims, evictions and child support.

The report lays out their findings and offers three recommendations for steps court officials should take to make their processes more open, equitable and efficient.

“Courts’ advances in technology show promise,” said Qudsiya Naqui, officer, Civil Legal System Modernization, at Pew. “However, if courts fail to improve existing processes, they run the risk of digitizing their problems rather than solving them.

“We hope this research will help courts better understand the effects of their online processes, leverage the benefits, and mitigate any harms.”

The report finds that, beginning in March 2020, courts adopted technology at unprecedented speed and scale, initiating online hearings and moving other routine functions online, such as electronic filing.

It offers the example of the Texas court system, which had never held a civil hearing by video before the pandemic, but which conducted 1.1 million remote proceedings (civil and criminal) from March 2020 to February 2021.

Courts’ use of technology had the effect of improving participation rates and helping users resolve disputes more efficiently, Pew finds. Court officials across the country reported increases in civil court appearance rates. Arizona saw an 8% drop in defaults caused by defendants who fail to appear in court.

For example, the report says that just after courts closed down, national debt collectors quickly ramped up filings, using online tools to file thousands of lawsuits every month.

Meanwhile, many pro se litigants faced hurdles due to their lack of high-speed internet service or computers or because of disabilities or limited English proficiency. 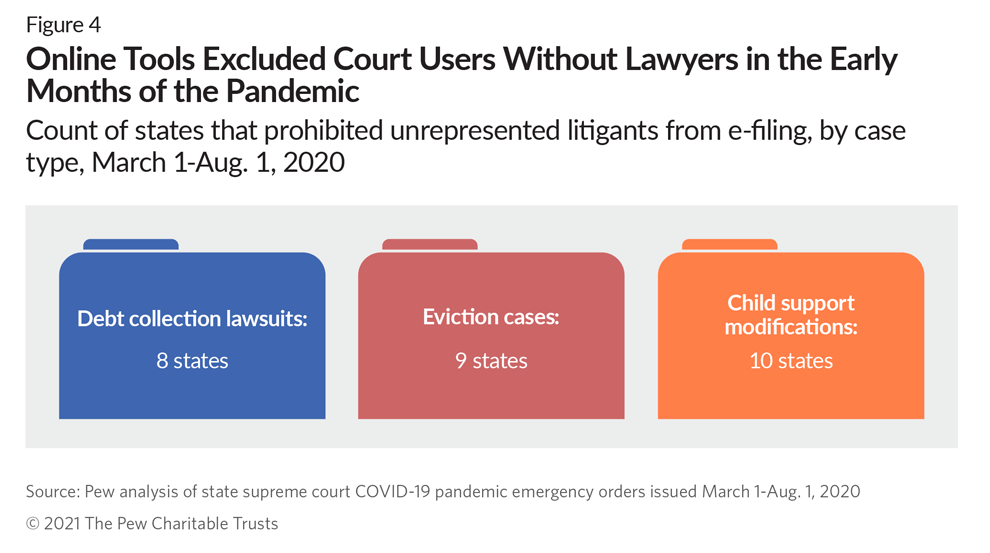 Others were blocked out of courts by archaic rules that prevented individuals without lawyers to file documents electronically. The report discusses how this prevented parents who suffered income losses from filing requests to modify child support obligations.

Based on these findings, the Pew research team developed three recommendations for courts to move their modernization to the next level and make their processes more open, equitable and efficient.

The report suggests that if courts simply layer technology on top of complex court processes, it will only reinforce the status quo of complicated, attorney-centered procedures that are difficult for people without lawyers to navigate.

To avoid that, the report recommends that courts examine the processes that litigants have to complete during various types of cases to identify opportunities to simplify forms and procedures.

“One example of such an effort is that several states reviewed notarization policies, which in many instances led to the elimination of traditional verification requirements, such as in-person document review by a certified notary public,” the report says.

2. Test new tools with intended users and incorporate their feedback.

“Without rigorous testing of technology platforms, courts may find themselves locked into expensive systems that do little to simplify the legal process for their users,” the report cautions.

The report says that testing not only helps courts refine and improve upon such tools, but it also gives them an opportunity to proactively engage with end users to make sure that the technology products are functional and meet their needs.

The report points to the example of Utah’s court system, which in 2019 hired an independent researcher to conduct a usability study of its ODR platform for small claims cases.

“The research uncovered various issues with the platform’s accessibility and functionality, and the court was able to make targeted improvements,” the report says.

Most state court systems do not share information with the public in an easy-to-understand format, the report concludes. For example, only one state, Texas, collects and makes publicly available information on debt claims lawsuits, including outcomes, across all courts.

While some state courts have taken steps to begin to share their data with users, the media, and external evaluators, more needs to be done, the report says.

“Having operated under pandemic protocols for more than a year, civil courts should engage researchers and other experts to help in developing metrics to measure modernization efforts, collecting data, identifying pandemic-era successes and areas for improvement, and fine-tuning technologies and systems,” the report recommends.

“Such a thorough examination will allow courts to implement data-informed process improvements that enable them to better help people without attorneys navigate and resolve legal issues.”

Technology has the potential to substantially improve the civil legal system, the report concludes, and tools that helped courts remain operational during the pandemic are now poised to become permanent fixtures of the legal system.

“As courts work to assess and improve these tools, they will need to incorporate feedback from court users, test multiple technology products, collect and analyze use and performance data, combine technology with other process improvements, and implement the principles and safeguards that court officials already have identified as critical to ensuring effective use of technology.

“With these steps and proven tools, states can modernize the civil courts and make them more open, equitable, and efficient than ever before.”