In the history of the United States, there are many dark chapters. One remembered at this time of year is the witch hysteria that overtook Salem, Mass., in 1692 and 1693, leading to the convictions and hangings of 19 accused witches – 14 women and five men.

I discovered all this only recently. For me, the witch trials were always a subject of mild interest, especially since I live on the North Shore of Massachusetts not far from where they took place. But in recent years, I have been researching my genealogy. A clue on Ancestry.com led me to uncover my connections to the witch trials.

The name Mary (Ayer) Parker had already appeared in my family tree, as I’d traced back connections from one generation to another. But she was just a name, and I hadn’t given much thought to her date and place of death: 1692 in Salem. 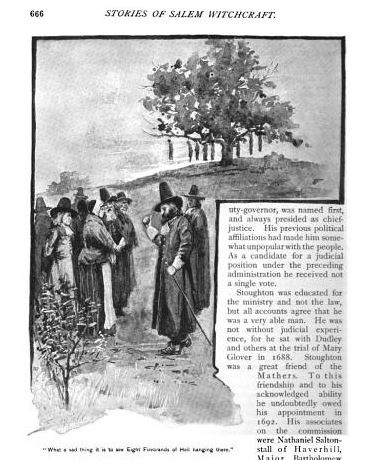 “What a Sad Thing It Is to See Eight Firebrands of Hell Hanging There.” Illustration from the New England Magazine, Volume 5, circa 1892

But an Ancestry clue from another of Mary’s descendants mentioned her in the context of the witch trials. A bit more sleuthing led me to realize that she was indeed one of the women executed by hanging in Salem that year for witchcraft, and that her name is among those memorialized in the Salem Witch Trials Memorial (pictured above).

Records are sparse about Mary Parker. At the time she was killed, she was a widow, age 55, living in the town of Andover, Mass., which then bordered Salem, with her son John. Her husband Nathan had been one of the original founders of Andover and a wealthy landowner when he died.

Much of what is known about her accusation comes from a court document detailing her examination. It describes that two young girls in Andover, Martha Sprague and Sarah Phelps, accused her of witchcraft, and that upon the mention of her name, several other suspected witches were cured of their “affliction.”

“How long have ye been in the snare of the devil,”, the examiner questioned her.

“I know nothing of it,” she answered. “There is another woman of the same name in Andover.”

Indeed, historians have since found that not only was there one other Mary Parker in Andover at the time, there were three others.

My Connection to an Accuser

Discovering that was fascinating. I had no idea of any such connection to the witch trials. And then I discovered a second connection, through a separate family lineage that converged with the marriage of my great grandparents.

Three of the principal accusers responsible for setting off the witch hysteria in 1692 were Sgt. Thomas Putnam, his wife Ann (Carr) Putnam, and their daughter Ann Putnam Jr. Ann Jr. was a witness in several of the trials. 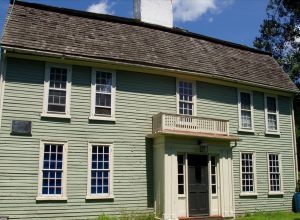 Sgt. Thomas Putnam (1652-1699) was the son of Lt. Thomas Putnam, who was my 9th great-grandfather. Lt. Putnam was born in 1614 in Buckinghamshire, England, and died in 1686 in Salem. Putnam had 11 children with his wife Ann Prudence Holyoke, and then two more children by his second wife, Mary Ingersoll. The house in which he lived still stands as a historical landmark in the town of Danvers, Mass., which, at the time of the witch trials, was part of Salem.

Another son of Lt. Putnam — and younger brother of Sgt. Putnam — was Deacon Edward H. Putnam (1654-1747). Edward Putnam was my 8th great-grandfather.

The Putnams had extensive land holdings in parts of Salem, but by the 1690s, Sgt. Putnam’s holdings were diminishing, even as many of his neighbors were prospering. Several articles I’ve read, such as this one from the Salem Witch Museum, speculate that the Putnams’ envy of and feuding with others in the community drove them to start accusing neighbors and strangers of witchcraft, accusations that resulted in the execution of innocent people, including Mary Parker.

In addition to Sgt. Putnam’s role as an accuser, a handwriting expert concluded that it was Putnam who hand wrote over 100 of the Salem witch trial documents, including the depositions of the afflicted girls. Analysis suggested that he copied out of a single deposition over and over again and submitted them all as evidence.

In fact, Sgt. Thomas and Ann Putnam were dramatized in Arthur Miller’s play, The Crucible.

So I am related to both a victim and an instigator of the Salem witch hysteria. Mary Ayer Parker, who was executed by hanging in 1692, was my 8th great-grandmother. Sgt. Thomas Putnam, the accuser who instigated the hysteria, was the brother and son, respectively, of my 8th and 9th great-grandfathers.

One final weird coincidence: Mary Parker was executed on Sept. 22. My mother — through whom I trace both lineages — was born on Sept. 23.