Even though the United States has more than 1.3 million lawyers, large swaths of the country have few or no lawyers. In fact, of the country’s 3,100 counties, 54 have not a single lawyer, and another 182 have just one or two lawyers.

This portrait of the nation’s “legal deserts” is part of the 2020 Profile of the Legal Profession being released today by the American Bar Association, a 150-page compilation of statistics and trends pertaining to the legal profession. The second year of the report, this is the first year that it looks at legal deserts.

(I wrote about last year’s report at Above the Law: New ABA Report: Everything You Ever Wanted To Know About The Legal Profession But Didn’t Know Where To Ask.)

Nationwide, there are roughly four lawyers for every 1,000 residents. But that number is misleading, the report says, because it fails to reveal the high concentrations of lawyers in some areas, such as big cities and state capitals, and the sparse concentrations elsewhere, particularly those with large rural expanses such as Arizona and Idaho. 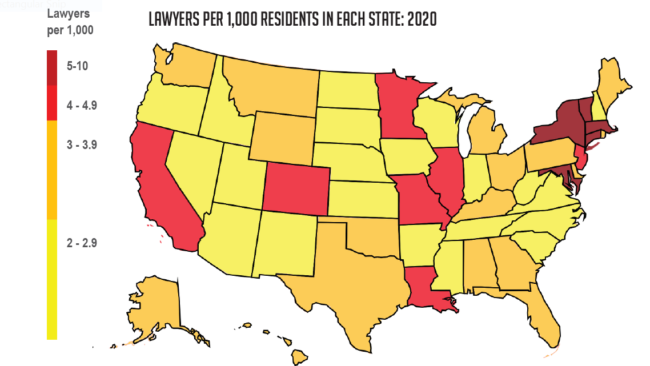 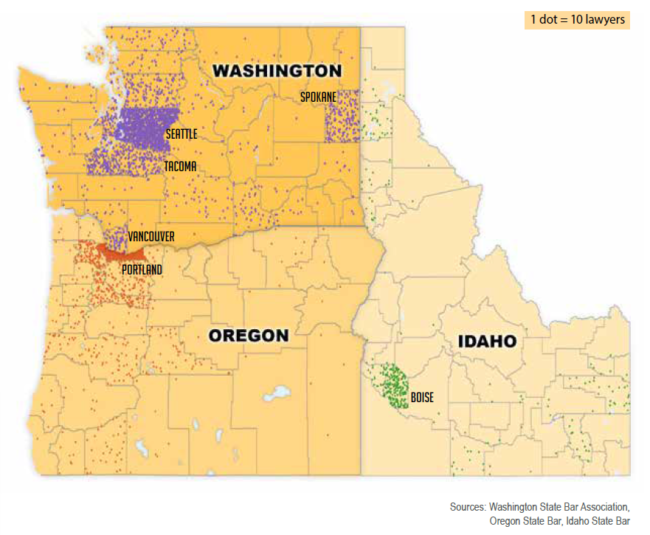 In Idaho, two-thirds of counties have less than one lawyer per 1,000 residents.

“Most people think the access-to-justice problem is strictly urban, but that’s far from true,” ABA President Judy Perry Martinez said in a statement she provided me by email. “In fact, nearly every state in the nation has large stretches of rural counties with few lawyers – or no lawyers at all.”

[Martinez and others will discuss the report in a webinar today at 11 a.m. E.T., Legal Deserts in America: A Threat to Justice For All.]

As Martinez suggests, even many of the states with the largest numbers of lawyers overall have areas where there are few lawyers. In New York, for example, which has more lawyers than any other state, 184,000, Orleans County on Lake Ontario between Buffalo and Rochester has just 31 lawyers for 40,000 residents, or fewer than one lawyer per 1,000 residents.

Further, simply having lawyers in a county does not mean they are available to provide legal services, the report notes. Many may work for the government as prosecutors, defenders or in other roles, and others may work for corporations or nonprofits.

The report does not delve into the impact on residents of living in a legal desert. But it points out that residents of these areas may “have to travel far to find a lawyer for routine matters like drawing up a will, handling a divorce or disputing a traffic violation.”

Martinez underscored this in her statement:

“Rural residents are disproportionately poor and many are forced to travel long distances to find lawyers to handle routine matters like wills, divorces and minor criminal or civil cases. Finding young lawyers who want to practice in rural areas – and finding money to pay them adequately – is a challenge nationwide. Fortunately, some states, like South Dakota, have found the will and the resources to make it happen.”

The states with the highest number of lawyers per capita overall are: