The legal research startup ROSS Intelligence came out fighting this morning in response to a lawsuit filed against it yesterday by Thomson Reuters alleging ROSS surreptitiously stole content from Westlaw to build its own competing legal research product.

ROSS says it had no need or desire to obtain Westlaw’s copyrighted material — releasing documents which it says prove this — and it suggests that the lawsuit is an anticompetitive tactic to prevent ROSS from obtaining new funding or merging with another company.

“We never asked for or used proprietary data from Westlaw,” cofounders Andrew Arruda, CEO, and Jimoh Ovbiagele, CTO, say in a blog post published this morning, denying the lawsuit’s allegation that ROSS induced the legal research and writing company LegalEase Solutions to use its Westlaw account to download massive quantities of Westlaw data and forward it to ROSS.

This data would have been useless to ROSS, the post says. “Not only could we not map this proprietary data to the case law in our database, our technology does not attempt to generate editorialized answers; instead, it aims to recognize and extract answers directly from the law using machine learning.”

The only motive for Thomson Reuters to bring this lawsuit would be to shut down a promising competitor, Arruda and Ovbiagele assert.

“By filing this lawsuit despite its lack of merit, Westlaw is interfering with our chances of securing more funding or merging with other companies, which we need to do in order to innovate and compete with Westlaw,” they say. “This is not the first time Westlaw has used litigation as a weapon.”

Earlier this week, as I reported on my blog yesterday, Thomson Reuters resolved a lawsuit against LegalEase based on the same facts, entering into a consent judgment and stipulated injunction that prevents LegalEase from reproducing Westlaw content, using bots to access content, and sharing its Westlaw credentials.

To substantiate this, ROSS released emails that it says show that when LegalEase did once send unsolicited Westlaw content, ROSS immediately told them not to send such proprietary information.

The first email is from the ROSS engineer who discovered the data, alerting the project lead. He said, “they [LegalEase] include a lot of what seems to be Westlaw headnotes, footnotes, and other stuff. If it’s possible for them to send us cases without that it would be much better as that is added noise.”

The second email, ROSS says, is from its project lead to its primary contact at LegalEase about the unwanted data. It said: “Iif you can send us cases without that extra info, that would be great. Thanks.”

LegalEase then responded, “Yes. We can do that.”

ROSS also made available this morning the statement of work agreed on between ROSS and LegalEase. Below is an image of part of that statement, and you can click here to see a PDF of the full document.

“In 2017, we started work with a contractor called LegalEase to build datasets to train our artificial intelligence (AI) systems,” the blog post says. “We needed legal questions mapped directly to passages from case law that answer those questions. It was crucial that the passages mapped directly to case law in our database because we wanted to teach our system to give on-point answers directly from primary law.” 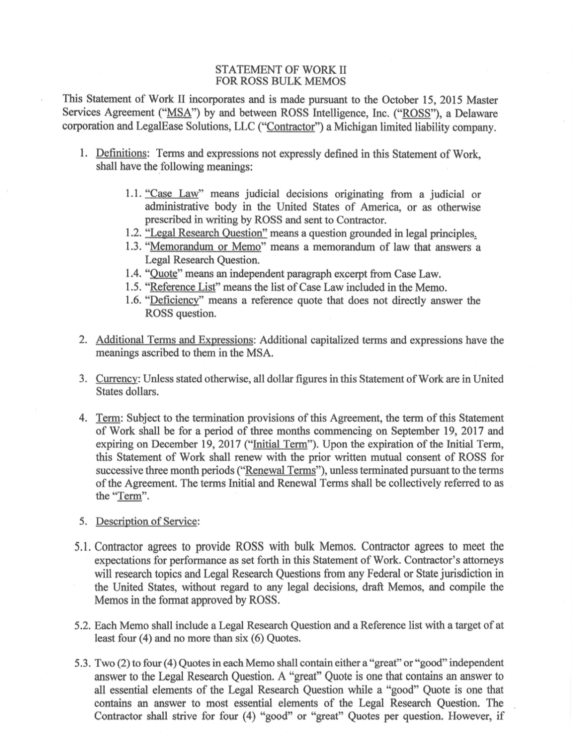 The statement of work requests LegalEase to research various legal research topics and questions and create a series of 120,000 memos, each containing a legal research question and reference list and four to six quotes from case law that answer the question.

Nothing in the statement of work specifies the legal research database to be used or explicitly suggests that LegalEase should provide any content that is copyrighted.

In their blog post, Arruda and Ovbiagele say ROSS has been on a mission to democratize the law through better legal technology.

“We recognize that for decades the legal research market has been dominated by Westlaw — with its bloated, expensive, and unintuitive products that provide bad results,” they write. “We knew there was a better, and more affordable, way.”

They say that ROSS has already spent $100,000 to comply with subpoenas in Thomson Reuters’ prior lawsuit against LegalEase, and they urge “friends and supporters” to help ROSS in this fight.

“We are asking our friends and supporters in the legal community to help us fight this unfair attack and allow us to continue building products lawyers love,” they write. “We believe that better legal technology can enable better access to justice at its core.”

“We will continue to fight for free access to the law,” the post says, “and look forward to showing the world Westlaw’s true colors.”