[See update: Revised ABA Report on Innovation Stripped Out All Mention of Rule 5.4]

At the midyear meeting of the American Bar Association in Austin, Tex., today, the House of Delegates voted to approve a resolution calling on states to consider innovative approaches to the access-to-justice crisis and, in particular, to consider regulatory innovations that could improve the accessibility, affordability and quality of civil legal services.

But some saw the version of Resolution 115 that the HOD approved as watered down — or, as one observer put it, “defanged” — to address concerns that it would be read as endorsing nonlawyer ownership of law firms or the delivery of legal services by providers other than lawyers.

The vote approving Resolution 115 comes as a growing number of states are considering loosening the rules governing the practice of law as a step towards meeting the legal needs of the estimated 80% of low and moderate income individuals who are unable to get legal help.

“RESOLVED, That the American Bar Association encourages U.S. jurisdictions to consider innovative approaches to the access to justice crisis in order to help the more than 80% of people below the poverty line and the majority of middle-income Americans who lack meaningful access to legal services when facing critical civil legal issues, such as child custody, debt collection, eviction, and foreclosure.

“FURTHER RESOLVED, That the American Bar Association encourages U.S. jurisdictions to consider regulatory innovations that have the potential to improve the accessibility, affordability, and quality of civil legal services, while also ensuring necessary
and appropriate protections that best serve the public.

“FURTHER RESOLVED, That the American Bar Association encourages U.S. jurisdictions to collect and assess data regarding regulatory innovations both before and after the adoption of any innovations to ensure that changes are effective in increasing access to legal services and are in the public interest.”

In the version approved today by the HOD, several changes were made to the original version. Here is an image showing the deletions and additions: 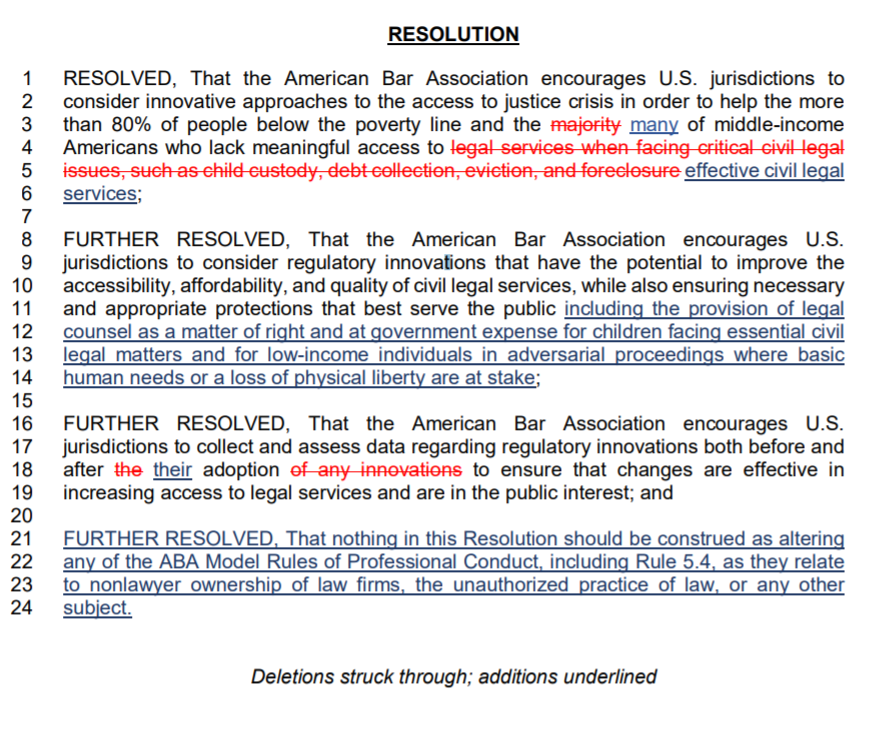 As you can see, the second paragraph was revised in a manner to suggest that certain legal needs should be met only by the provision of legal counsel.

Even more striking, a final paragraph was added that could be read as effectively erecting a roadblock to many of the innovations currently being considered in states such as Utah, Arizona and California.

But in exchanges on Twitter with some who were present for the HOD vote, they said that my reading is wrong, and that the purpose was simply to clarify that the resolution was not recommending changes to the Model Rules.

Not true, Bob. The last resolved clause simply makes the point that the resolution isn't recommending any changes to the Model Rules. The whole point is that we want to see what works at the state level. Then we'll know what should be the "model."

The report in support of the resolution, written by Daniel B. Rodriguez, chair of the Center for Innovation and former dean of Northwestern’s Pritzker School of Law, said that the resolution “calls for U.S. jurisdictions to consider regulatory innovations that foster new ways to deliver competent and cost-effective legal services and have the potential to improve the accessibility, affordability, and quality of those services while retaining necessary and appropriate client and public protections.”

As examples of regulatory innovation states might consider, the report identifies:

But, as I noted above, with the changes adopted today, the HOD has made clear that no such innovations will be made in the Model Rules, at least for now.

The report and resolution also call on states to collect and assess data regarding regulatory innovations, “to ensure that changes are data driven and in the interests of the public.”

Had the ABA adopted the resolution as drafted, it would have been a symbolically significant move for an organization that is often viewed as an obstacle to innovation and as a bastion of traditional lawyer regulation.

Even with today’s changes, the resolution is significant as an encouragement to states to innovate and as recognition that innovation is needed if we are to address the access-to-justice crisis. Without doubt, it is a step forward.

But with the changes adopted today, the HOD has, in my opinion, muddied the clear language of the original resolution and possibly sent what some will see as a mixed message about regulatory innovation.

So now it is up to the states. Some have already taken the lead. Will others now follow suit?