Evisort might just be the hottest legal tech and AI company you’ve never heard of.  Born out of Harvard Law School, MIT and the Harvard Innovation Lab; funded by an investment firm backed by Bill Gates, Mark Zuckerberg, Jeff Bezos and other Silicon Valley luminaries; recently profiled in a Columbia Business School case study on entrepreneurship; and its three founders named to Forbes 30 Under 30, it’s safe to say this is a company worth watching.

Today, the company is introducing its flagship product, Document Analyzer, a cloud-based AI and text-mining application that helps companies mine contracts for data. It automatically searches, analyzes, sorts and categorizes contracts; extracts from them key information and metadata; and can then build custom reports around a variety of customizable parameters. It is designed to work out-of-the-box to identify more than 50 search and reporting fields, with no training or configuration required.

The idea behind Evisort is to automatically turn the unstructured text of a company’s contracts into structured data useful to the company’s legal, finance and business operations. Point it at your document servers and it automatically identifies which documents are contracts, classifies their contract types, and extracts key data from those contracts that you can view, search and generate reports around.

While Evisort’s application has already been on the market, today’s release marks a major upgrade with several new features and improvements. These include:

What Evisort is able to do, founder and CEO Jerry Ting told me during a recent interview, is understand meaning and context within contracts and abstract them to make them more useful and accessible. A company might have 10,000 documents in a shared network drive. With virtually no setup, the company could point this cloud-based application at that drive and it would automatically analyze and abstract them. It works out of the box and is scalable to any size system, Ting said. Users can also upload documents individually.

Within seconds of loading a contract, Evisort tells you:

It also pulls out key provisions of the contract, such as indemnification, confidentiality, limitation of liability, governing law, and the like.

For PDF documents, Evisort uses enhanced optical character recognition to convert them into searchable Word documents. Ting said that Evisort’s OCR uses AI to more accurately understand and translate scanned documents. It is able to convert complicated objects in PDFs that other OCR programs cannot handle, such as tables and exhibits.

Viewing a document shows key information about it as well as the document itself.

Each document processed by Evisort can be viewed within the application. This document view shows the document’s metadata, a summary of its status and key dates, the key provisions Evisort extracted, and related documents. It also shows a preview of the actual document, either as uploaded in Word or converted from PDF.

Any of these fields can be combined to generate custom reports on contracts.

A powerful feature of Evisort is its Contract Analyzer. It allows users to create custom reports about a company’s contracts by mixing and matching any fields within Evisort or any search terms. As an example of how this feature could be used, Ting demonstrated how a user could create a report showing all contracts that over a certain dollar amount, from within a certain region, and that contain certain legal provisions. Whereas creating such reports might have required a database engineer before, now an attorney can do it in just moments. 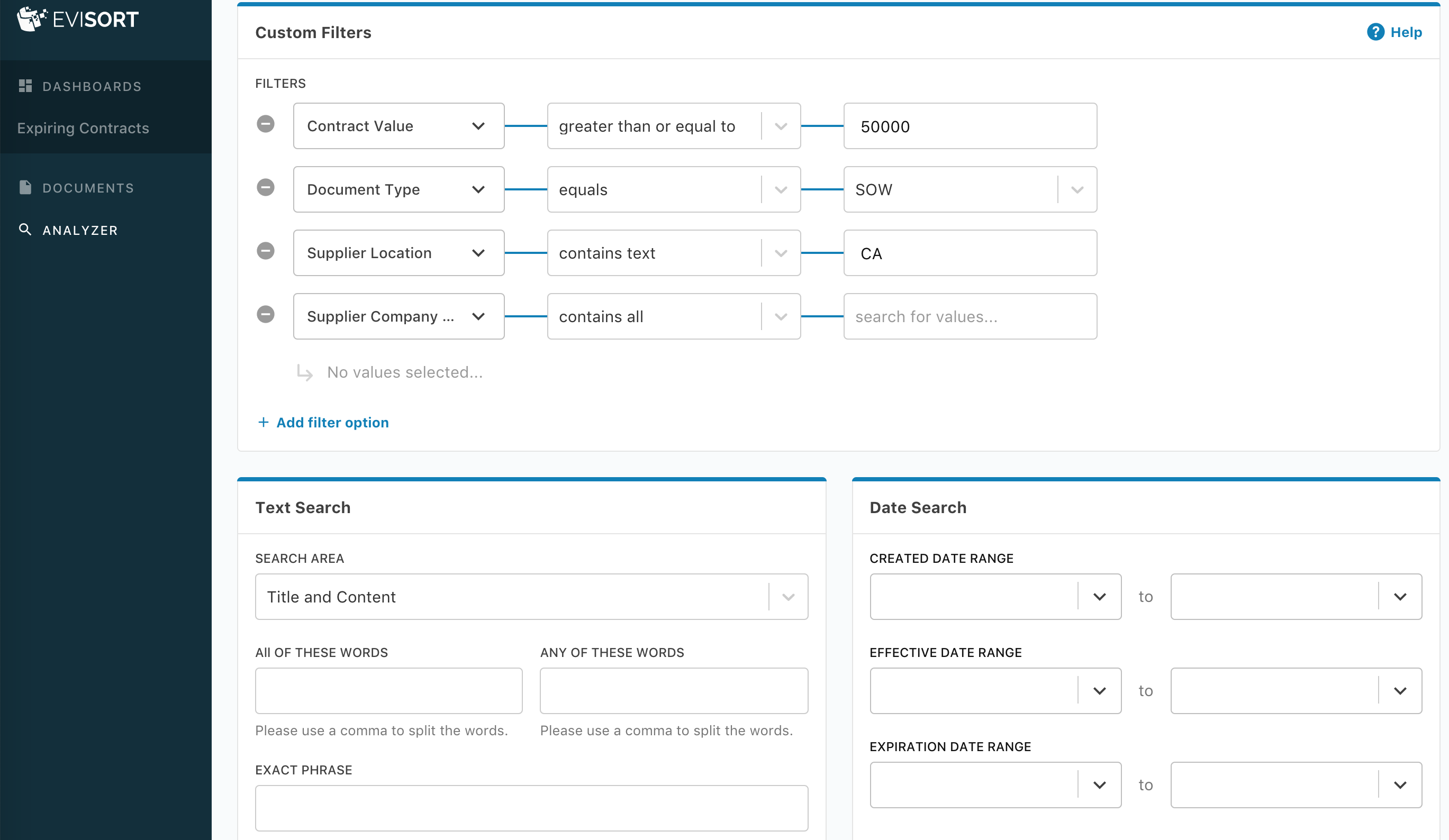 Additional custom filters can be added with the Document Analyzer.

Evisort’s dashboard features two views. An Expiring Contracts view shows which of your contracts are set to expire or renew. It includes a calendar of upcoming events and lists of expiring contracts by dates. The dashboard also displays contracts that have been flagged for review.

In advance of today’s release, I was given a demonstration of Evisort and provided with access to a “sandbox” version to test it. The version I tested was an earlier build and did not include some of the key features being made available in today’s release, but these features were demonstrated to me.

CEO Ting founded Evisort in 2016 together with CTO Amine Anoun and COO Jake Sussman. Ting and Anoun met when Ting was a Harvard Law School student working in a legal clinic and Anoun, then an MIT Ph.D student, came to him for legal help. As they worked together on Anoun’s matter, the two came to the conclusion that the legal market sorely needed better software for document management. Joined by Sussman, Ting’s Harvard Law classmate, they formed Evisort with the goal of using AI to improve technology for lawyers.

Earlier this year, the company secured an investment from Amity Ventures, an early-stage venture capital firm, and Village Global, a VC firm whose backers include Bill Gates, Mark Zuckerberg, Jeff Bezos, Reid Hoffman and others.