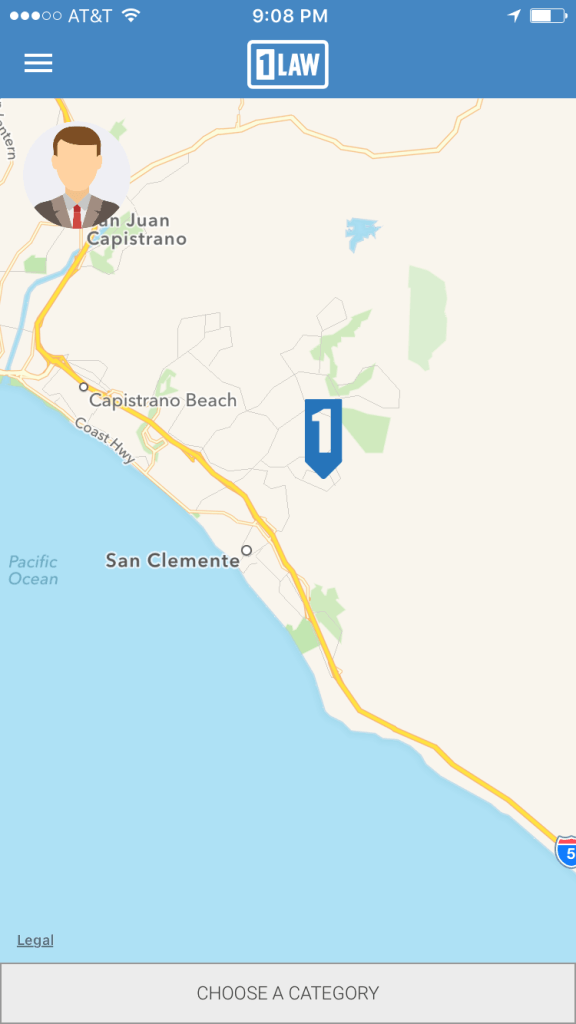 Debuting at ABA Techshow this week is a new iOS app that will allow consumers to locate an available attorney and connect with him or her instantly by video, in much the same way that someone can hail a ride on demand using the app Uber.

As of this writing, the app, which is tentatively named 1Law, was awaiting final approval from Apple to be included in the app store. The app’s developer, A. Jason Velez, hoped that the app would be available in the app store by the start of Techshow.

I was able to see a beta version using TestFlight, Apple’s beta testing platform for apps in development, and to talk about its development with Velez, a personal injury lawyer in California whose firm also operates under the name 1Law.

“My app is in the on-demand service space, like Uber for lawyers,” says Velez. “Touch the app and communicate with the attorney in real time, live.”

When a consumer first installs the app, he or she is prompted to create a login and simple profile, either by connecting to a social network such as Facebook or using an email address.

Once the user logs in, the app shows a map of the user’s location. If a lawyer who is part of the system is in the vicinity, the lawyer will show up as an icon depicting the number one. Blue icons indicate lawyers who are available at that moment. Grey icons indicate lawyers who are part of the system but not currently available.

Users can choose a particular area of law to narrow the displayed icons to only lawyers who handle that area.

By clicking on the icon, the user sees the lawyer’s profile, describing the lawyer’s practice. If the user wants to go forward and contact the lawyer, he or she taps the call button under the profile. 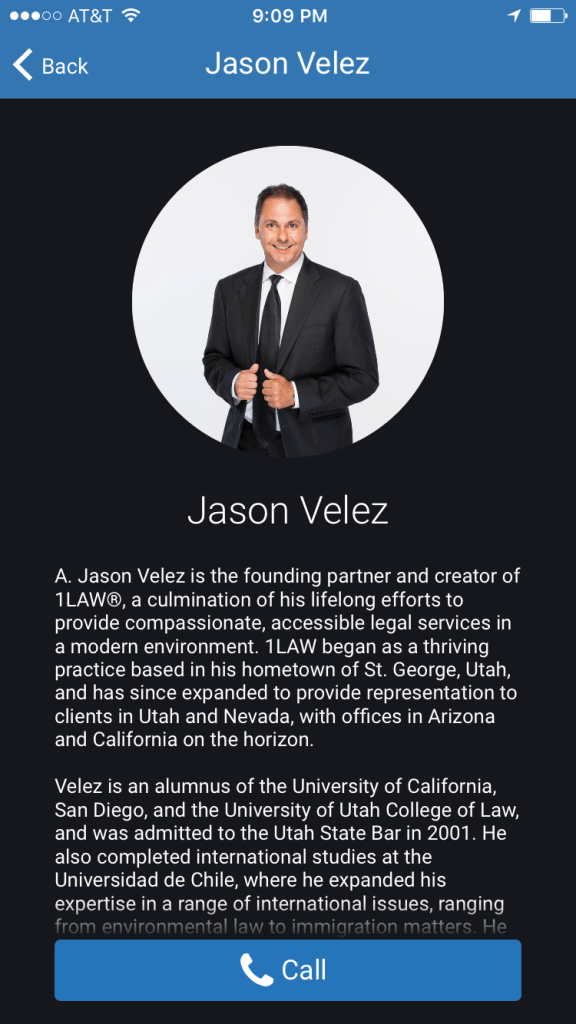 The lawyer sees the call coming in, displaying the caller’s name and profile. The lawyer can either deny or accept the call. If the attorney accepts, the two are connected into a video call. If the lawyer denies the call, the user can try a different lawyer. (The app uses Twilio as its video platform.)

How Will it Be Used

“We believe this service has broad-based application to the legal aid societies as well as a relationship development device for attorneys,” Velez says.

His plan is to develop a network of lawyers to participate in the service. Although he was still working out the details when we spoke, he anticipated that he would offer lawyers some period of a free trial and then charge on a subscription basis for their participation.

He foresees the app being used to answer quick and simple legal questions at no charge. The incentive for attorneys to participate is to establish relationships with users that could then lead to fee-generating services and referrals.

He also sees the app as being useful to legal services organizations in providing quick legal help and legal triage to low-income clients, especially those who may be unable to get into an office for geographic or physical reasons.

So could this app become the Uber of law? No doubt, access to on-demand legal advice, especially at no cost, will be attractive to many consumers. The bigger question will be whether attorneys will participate and to what extent. My guess is they will and that the app will also find a place in the pro bono community.

Meanwhile, watch for it to appear in the app store. And if you are attending Techshow, be sure to look for 1Law there.