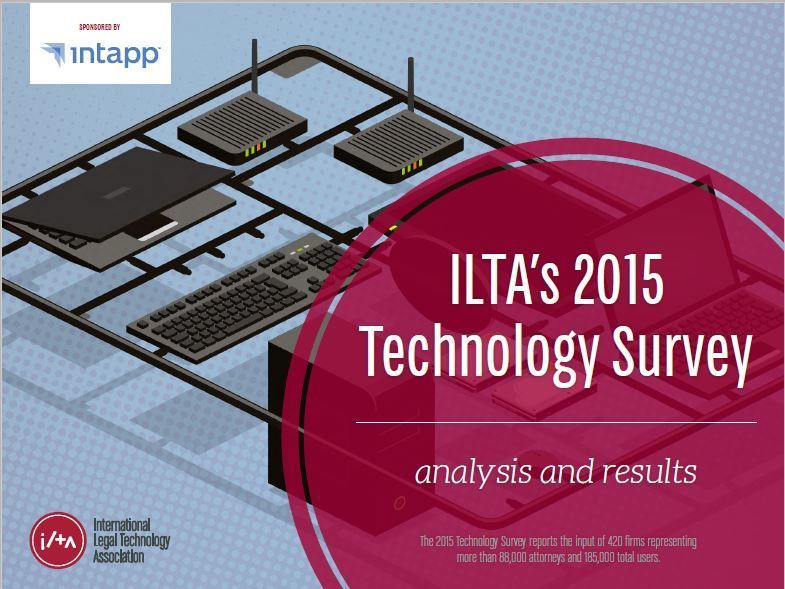 The International Legal Technology Association (ILTA) has just published its 2015 technology survey. The 269-page report is based on input from 420 law firms representing more than 88,000 attorneys and 185,000 total users. Law firms with fewer than 150 attorneys represent 66 percent (277 firms) of total responses.

Copies of the survey are available free for ILTA members and for $500 for others.

I just received a copy this morning and have not had time to read it. I’ll post more about it when I do.

Meanwhile, however, Jobst Elster has a post at InsideLegal’s blog summarizing some of the survey’s key findings. Not surprisingly, he says that security is the prevalent theme, with 23 percent of the survey questions pertaining to security-related topics. Some of the survey’s standout points on security, he reports, are:

Elster’s post also recaps some of the survey’s highlights outside the area of security. I’ll mention a few but urge you to read his post for more:

And here were some points Elster highlighted that surprised me:

Elster’s post at InsideLegal has more information about the survey. Once I get a chance to go through it, I’ll report more here. Meanwhile, the complete survey is available from ILTA, where it is free to ILTA members and $500 for all others.