The American Bar Association’s Legal Technology Resource Center is out with the 2015 edition of its annual Legal Technology Survey Report, and it reveals that growth in blogging among lawyers is virtually stagnant.

This year, 26 percent of respondents said that their firm has a blog. That is slightly up from last year, when it was 24 percent, but down from two years ago, when it was 27 percent. Overall, the percentage has remained largely unchanged over the past three years.

The same stagnancy was evident when lawyers were asked whether they personally maintain a legal blog for professional purposes. Overall, 7 percent said that they do, down from 8 percent in 2014 and 9 percent in both 2013 and 2012. 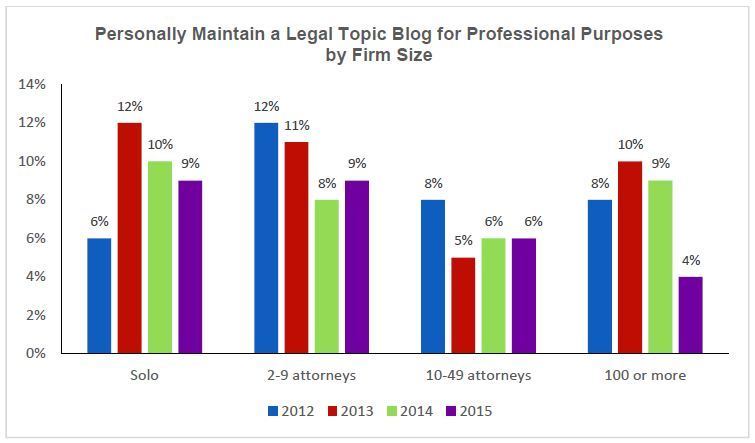 The survey also shows little change in the time lawyers spend working on their blogs. Overall, they devote about 1.9 hours per week to updating and maintaining their blogs. That is slightly less than 2.1 hours in 2014, 2.4 hours in 2013, and two hours in 2012.

One interesting question the survey asks each year is whether lawyers who have blogs have ever had a client retain them directly or via referral as a result of their legal blogging. Thirty-nine percent said they had. Here again, that percentage was virtually the same as 2014 (39.4%) and 2013 (39.1%). A third said they had not had a client retain them because of their blogging and 28 percent did not know whether they had or not.

The information about blogging was contained in Volume IV of the survey, which covers web and communication technology. For this survey, the LTRC received 938 completed questionnaires.