You may remember reading here about ClearView Social, the social media sharing app designed for lawyers by social media marketing consultant Adrian Dayton. Last May, I wrote a post critical of the idea, but after talking to Dayton and seeing a demonstration, I softened my position. 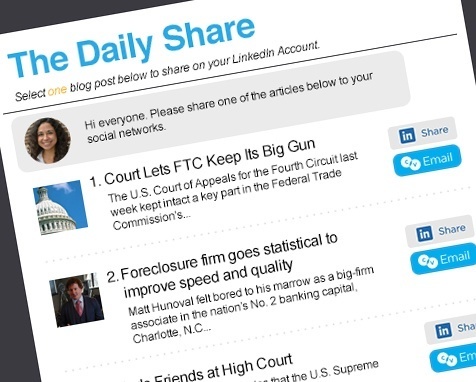 Those posts were about an early, beta version of the app. This week, the app officially launched out of beta. I have not seen the latest version, but Dayton’s announcement said that it includes several new features.

The basic idea behind the app is to make it easy for lawyers at larger firms to share on social media by having their marketing departments feed them the content to share. The lawyers get an email listing articles or blog posts and choose the ones they want to share out to their own social networks.

My original concern was over the premise of having marketing departments feed lawyers with pre-programmed content to post to their feeds. This could turn the lawyers’ feeds into streams of spam, I suggested.

After seeing the demo, I wrote this:

I’ll admit I’ve softened my position. I can see that it could be a useful adjunct to a lawyer’s social media engagement. I can still see, however, how easily it could be overused or wrongly used and prove my fears about spam.

As for new features in the version released this week, the announcement said this:

New features include IP-address tracking so attorneys can identify the companies viewing their content; tools that allow segmentation by practice areas and industry teams; and advanced analytics to measure the effectiveness of the content being shared across the entire organization.

I’ll be interested to follow the progress of this app and see what kind of traction it gains among large firm lawyers.