When lawyers who are new to Twitter ask me how to find other lawyers to follow, I point them to either of two directories, LexTweet, operated by the folks at legal blog company LexBlog, and LegalBirds, part of the Justia legal portal. Both of these enable you to find lawyers on Twitter by popularity and location. In addition, LegalBirds organizes them by practice areas, so if you want to find an estate-planning lawyer on Twitter, you can.

Consider Harvard Law Professor Lawrence Lessig, who LegalBirds lists as the lawyer with the most followers and LexTweet lists as #5. As of this writing, Lessig has 266,959 followers, but LegalBirds has the number at 229,155 and LexTweet has half the actual number, 127,612.

For others, the numbers are much farther off. David Lat, the editor of the popular blog Above the Law, has 10,763 followers as of this writing. But LegalBirds lists him as having 3,088 and LexTweet has him at 4,502. Even LexTweet’s owner, Kevin O’Keefe, doesn’t get a break. While he actually has almost 17,000 followers, his site lists him with 10,831 and LegalBirds has him at 14,745.

Like I say, this doesn’t really matter in the real world, unless you’re a Twitter version of one of those baseball nerds who is obsessed with stats. Both of these directories are still useful for finding lawyers on Twitter.

A Site for ‘Social Intelligence’

Meanwhile, a different type of directory for finding lawyers on Twitter — as well as for gaining insight into your own network of followers — is Twtrland. Unlike the directories above, Twtrland is not exclusively a lawyer directory, but it does let you explore Twitter by various categories of skills and expertise, with “legal” as one of those categories. 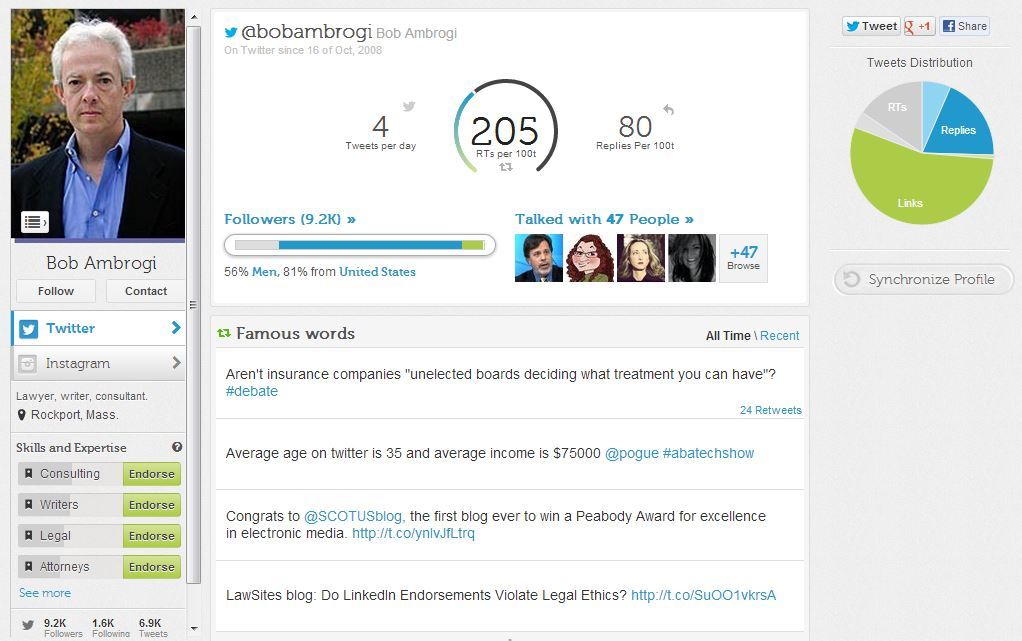 My profile says I have 205 retweets for every 100 tweets.

Twtrland is also unique in its profiles of Twitter users. Its developers say that they created it in order to help people decide whether to follow someone. To do this, it analyzes a person’s Twitter activity to create a visual depiction of the person’s “social footprint.” Each profile includes:

You can drill down through some of these stats to find more granular information about a person’s (or your own) followers. For example, I can see who among my followers is from the U.K., and then further refine my U.K. followers by skills or other facets. Twtrland profiles also compile a person’s most-popular tweets, broken down into categories such as “famous words,” “links” and “retweets.”

If you find a profile on Twtrland where the numbers appear to be out of date, that’s not a problem. Every profile includes a “synchronize” button that instantly updates the stats.

For marketers and power users, Twtrland offers a pro version that lets you track brands and campaigns and perform market analysis. The pro version ranges in price from $19.99 to $249.99 a month.