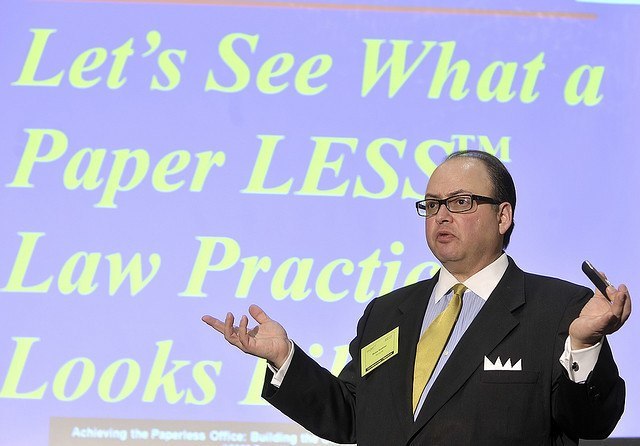 The legal technology field lost a giant this week with the death of Ross Kodner, who suffered a heart attack two days after turning 52. Ross was a lawyer — a 1986 graduate of Marquette University Law School — but was known worldwide as the founder of the legal technology consulting firm MicroLaw, which he started in Wisconsin in 1985, and as a prolific speaker and author. I find it hard to imagine that there could be a lawyer anywhere in the United States who has not attended at least one CLE session presented by Ross or not read at least one of his articles.

No doubt, there will be many, many tributes to Ross talking about his many contributions to legal technology, about his long-unwavering dedication to WordPerfect, about the opulent, invitation-only Consultants and Technologists Dinner he hosted every year at TechShow, and about his gregarious nature and the warm greeting he offered everyone he met.

But I wanted to mention two of Ross’s achievements that, with the passage of time, many have been forgotten, but which exemplify the kind of guy he was.

Think back to Sept. 11, 2001. In the aftermath of that horrible event, many of us were so stunned and shocked that we did not know how to respond. Not Ross. Less than a week after the attack, the New York State Bar Association launched a website called Legal TechAid, devoted to serving as a clearinghouse of information about replacing computer systems, recovering data and reestablishing law practices interrupted by the events of that day. The site was almost entirely the result of the volunteer work of Ross and Dale Tincher, president of Consultwebs.com, who joined forces and scrambled to make it happen. (Ross preserved an archived version of the site on the Microlaw website.)

Four years later, another disaster struck, and Ross once again sprang into action. This time, the disaster was Hurricane Katrina, the deadly storm that devastated the Gulf Coast. Within days of Katrina, Ross and Dale had again collaborated to launch a website, which was called Help Katrina Lawyers. Its purpose was to pull together and serve as a clearinghouse for volunteers and resources to help Gulf Coast law firms with issues relating to legal technology, practice management and data recovery. In just days, Ross and Dale managed to mobilize a small army of lawyers, vendors, consultants and others who were willing to offer their assistance.

Craig Ball wrote a great tribute to Ross which I urge you to read. In it, he refers to Ross’s campy humor and sardonic wit. For a sample of that, you need have looked no further than his LinkedIn profile, where he listed his two favorite quotes:

“If you think hiring an expert is expensive, try hiring an amateur.”

Those of us who had the good fortune to know Ross can hear him saying those quotes in his clear and distinctive voice. It was a voice that will be sorely missed at technology conferences and CLE programs for many years to come. Rest in peace, Ross.