I do not usually review consumer hardware here, but I am making an exception for the Sony RDPX200iP speaker dock for iPads and iPhones. I’ve been wanting a new speaker dock for awhile and have researched several popular options, including the highly recommended Bose SoundDock Series II

. But the reviews kept leading me back to this Sony, which costs less than the Bose and which multiple reviewers said has sound that is as good as or better than the Bose. Plus, unlike the Bose, it has Bluetooth, so it can work with any Bluetooth-enabled device. 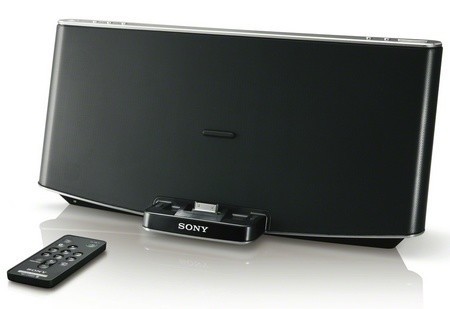 When I first looked at the Sony, back in January, it was priced around $200. Now, it appears that Sony has discontinued this model, and the price is dropping. Recently, Amazon had it at $125, so I took the bait and bought one. As of this writing, it’s price is back up at $148, but I’d be willing to bet it will drop again.

I now have this in my office and am listening to it as I write this. The sound is really phenomenal for such a compact unit. I do think it is comparable to the Bose SoundDock. It has 40W of output and has separate tweeters, which gives greater clarity to voices. It works with iPhones and iPads, but has the original 30-pin connector, so iPhone 5 users will need a lightning adapter. As I said, it also works with Bluetooth and has an auxiliary input jack if all else fails. There is a full-function wireless remote control.

The unit is light and portable, but must be plugged in via a power brick. There is a higher version, the Sony RDPXF300iP

(also discontinued), that has a rechargeable battery and an FM radio. But, from what I can tell, it does not have the separate tweeters, which I find make a noticeable difference in the sound.

So here I am reviewing a product that may soon be obsolete. But that makes it a good time to get it for a good value.