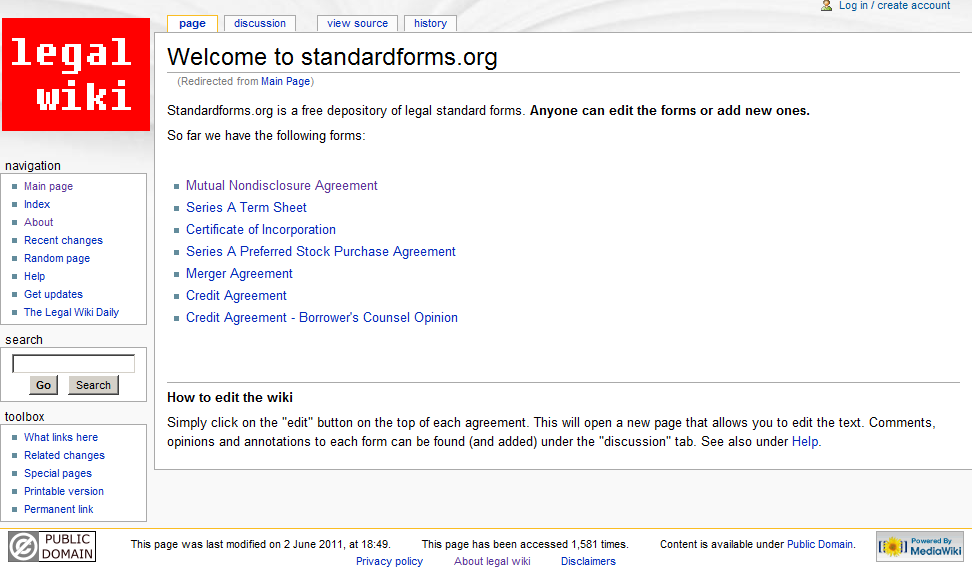 A new legal wiki, Standardforms.org, has been launched to provide a free depository of sophisticated legal documents. Notably, the site is not intended to serve as a cache of ready-to-use legal forms. Instead, its founder hopes that the wiki feature — which allows anyone to add and edit forms — will provide a vehicle for lawyers to improve the forms and lead to a consensus of what they should say.

Here is how the site’s founder describes it:

This wiki is a simulation of what lawyers call “the market”. It is a sandbox in which you can draft legal agreements the way you think they should look like. Others can disagree either by further revising the wording or by leaving comments. That same process happens every time a legal agreement is being negotiated. Here it is done in the open – for everyone to see and participate.

The wiki has fewer than 10 forms posted so far. They include a mutual nondisclosure agreement, Series A term sheet, certificate of incorporation, Series A preferred stock purchase agreement, merger agreement and credit agreement.

The wiki’s developer, Florian Feder, is assistant vice president and counsel at Brown Brothers Harriman. He describes himself as “interested in the art (science?) of contract drafting and in ways of making this process more efficient with the help of new technologies.”