At the PLI seminar on social media I attended yesterday in New York, one of the speakers, Kelly Hoey, remarked, “I don’t ever again want to have to fill out another social media profile.” Well Kelly, meet Lawford, a new professional networking site for lawyers that fills out your profile for you.

This week marks the private-beta launch of Lawford. Lawford’s developers have the ambitious goal of building the largest legal networking platform in the world. In fact, they say that they hope someday to have every lawyer in the world become a contributing part of the site.

[See below for an invite code.]

Given the tough time other legal-vertical networking sites have had building up any critical mass of users, not to mention the ABA’s recent shuttering of its networking site, Lawford has its work cut out for it. That said, it is approaching the legal market in a unique way, one that cuts out much of the work of joining a professional network.

Recognizing that lawyers are tight on time, Lawford aims to make the sign-up process as painless as possible. To do this, it has assembled data on literally every lawyer in the United States. What that means is that it knows who you are before you ever tell it a thing about yourself.

Before you ever register, Lawford has already collected information about you.

Once you’ve confirmed your basic information and made your initial selections of colleagues and classmates to connect with, Lawford creates your profile page, automatically populated with your basic information and even a description of your practice. But before it does that, it asks you to make one more selection: Your profile picture. Lawford even already has a collection of photographs of you scraped from the Web. Pick the one you want to use (or upload a different one) and your basic profile is complete. 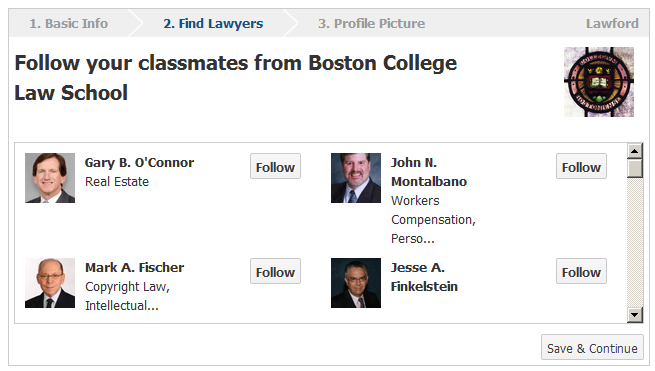 Lawford suggests classmates to follow, even if they are not members.

Of course, you can then fill out your profile with additional information about your practice, work history, education and biography.

Because Lawford has prepopulated your basic information, the entire sign-up process takes just moments to complete. 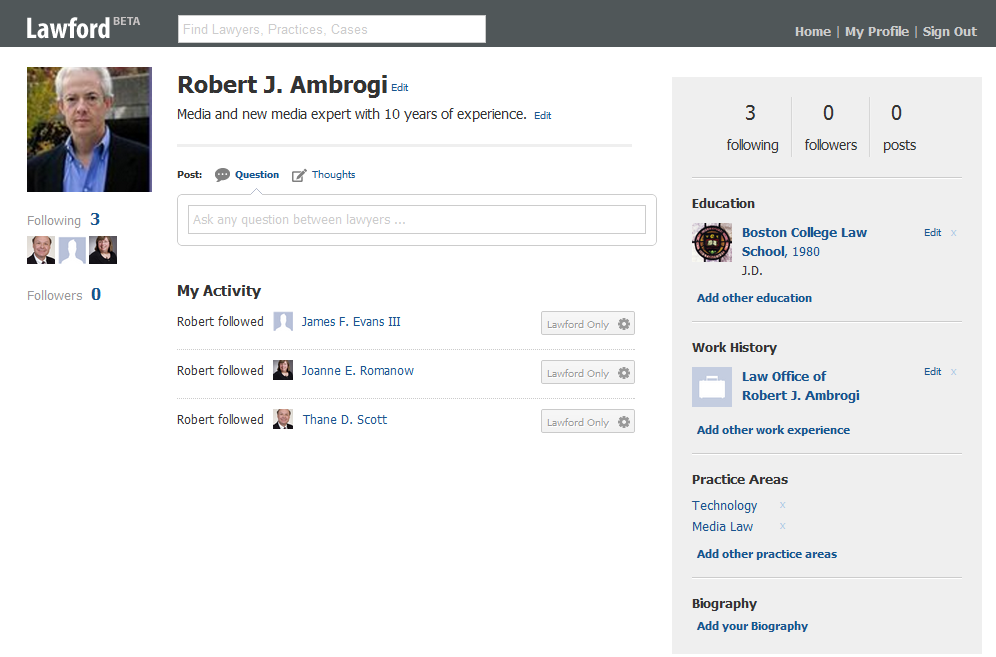 After just a few clicks, your basic profile is complete.

You will also be able to see suggestions of other lawyers in your practice area that you may want to connect with, although this feature was not yet working when I tested it.

A Unique Means of Connecting

Lawford is also unique in how it handles connection requests. On other social and professional networks such as Facebook and LinkedIn, you can create connections only with other registered users. Lawford lets you request to connect with virtually any lawyer, regardless of whether the lawyer is registered with the site.

For example, when it showed me a list of my law school classmates I might want to connect with, the names on that list were not necessarily Lawford members. Rather, Lawford claims to have an email address for virtually every lawyer. When I indicate I’d like to connect with my old buddy John Smith, Lawford sends John an email inviting him to Lawford. (Unfortunately, Lawford doesn’t indicate whether someone is already a member; it would be nice to have an icon of some sort telling you this.)

Will Also Include Cases, Articles and Questions

Another interesting feature that is being developed in this beta version of Lawford (but which is working only to a limited extent as of this writing) is integration of court opinions and legal articles. The idea is that you will be able to integrate actual cases into discussions about them. Say you want to start a discussion about a recent court opinion. You can locate the opinion within Lawford and attach it to your comment, so that others can readily reference it. You can also follow the opinion to be alerted when others comment on it.

As you type a case name, Lawford suggests matches.

As of now, Lawford has added only cases from the 6th U.S. Circuit Court of Appeals. To find a case, you simply begin typing its name and a drop-down menu appears with suggested matches. When you see the full name, click on it to open the case.

At some point, Lawford plans to enable lawyers to post articles and other documents. Other users will then be able to vote for the best of these, based on factors such as the quality of the article and the legal knowledge it reflects.

Lawford also plans to incorporate features along the lines of Quora, allowing lawyers to post questions and answers to each other about law and law practice.

The co-founders of Lawford are two software engineers, Apoorva Mehta and Avlok Kohli. Mehta formerly worked for Amazon.com and at RIM, where he helped develop the BlackBerry audio codebase. Kohli worked at Doximity, a professional networking site for medical doctors. Raj Datt, a lawyer in the Toronto office of Cozen O’Connor, is the company’s legal advisor.

I recently interviewed Mehta and Kohli. Afterwards, they gave me 100 invites to offer to readers of this blog. If you are interested in checking it out, the code is my last name, all lowercase: ambrogi.

I belong to a couple of lawyers-only listservs that are constantly active with lawyers asking questions, sharing tips and offering advice among themselves. I continue to see the potential for a lawyers-only professional networking site to foster this kind of exchange among lawyers and take it to the next level, with document sharing and other features that a listserv could never offer.

For some reason, however, these lawyers-only sites have failed to gain traction. As I noted, the ABA closed its site. I recently noticed that another networking site that focused on e-discovery professionals, PivotalDiscovery, had closed. Legal-vertical sites such as Legal OnRamp and Martindale.com Connected continue to hobble along, but without either having achieved the level of activity they might have hoped.

Will Lawford succeed where others have not? It certainly brings some unique ideas to the table. If it is able to fully incorporate cases as it plans, if it is able to add a Quora-like Q&A feature and if it is able to build out a JDSupra-like article sharing feature, it should have some appeal. Its biggest challenge will be in convincing lawyers that they need to join any kind of networking site beyond the big two of Facebook and LinkedIn. At least it makes joining easy for a lawyer to do.